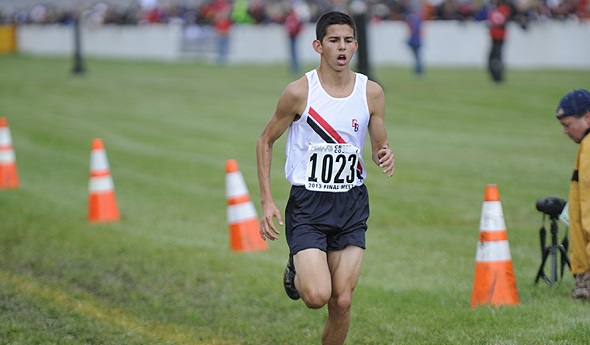 But the return of all four individual champions from a previous season is certainly rare – and could make Saturday’s races as a set among the most noteworthy in some time as all four run for the final time at the high school level.

Click for a full list of competitors plus additional information on Saturday’s event, which will see 1,002 boys at the start line. Read on for more of the run-up to the team and individual competitions in all four races.

Milford’s three-season run atop Division 1 will end after the team graduated five of its top six – only one runner qualified for this weekend. Mott, the runner-up the last two seasons, would be happy to take the next step. The Corsairs return their top three and four of their top six from last season’s runner-up team, including fourth-place senior Ryan Robinson and 14th-place senior Sam Albaugh. Northville will look to jump from fifth returning four of its top five from 2013 including 21st-place senior Nick Noles, and Rockford should make a nice move after coming in 12th last year while running five underclassmen – the Rams’ top five are back, and freshman Cole Johnson was their second-fastest and sixth overall at the Regional win last week.

Grand Rapids Christian just missed its first top-two Finals finish last season since 1978, and is favored to claim its first title with six of seven runners from 2013 back including ninth-place senior Benny Briseno. Fremont’s tradition is more storied – the Packers’ seven MHSAA titles are tied for fourth-most by Lower Peninsula programs – and despite not making the Finals as a team in 2013 are returning after placing four among the top eight in winning their Regional. St. Joseph has finished runner-up two of the last three seasons and brings back four of its top six from last fall including its top two finishers, seniors Erik Edwards (15th) and Nick Jewell (28th). Two-time reigning champion St. Clair made the Final again despite no seniors in the lineup after graduating its top six from last season’s victorious team.

Individuals: There should be some turnover among the lead packs, with 11 of last season’s top 20 graduated. But five of the top 10 return, beginning with reigning champion and Cedar Springs senior Austin Sargent. Third-place junior Blake Watson from Corunna is back to make another push, joining St. Johns senior Codey Cook (seventh), Briseno and Chelsea senior David Trimas (10th) among the top returning finishers. Sargent had the fastest Regional time last week in Division 2, 15:46.2, followed by Briseno (15:48) and Corunna sophomore Noah Jacobs (15:59.2), who beat teammate Watson by 25 seconds and finished 56th at last season’s Final.

Reigning individual champion and senior Keenan Rebera leads the favored Cougars, who bring back four of their top five from last season’s third-place team. But reigning champion Benzie Central is far from being out of the conversation – the Huskies have four of their top six back from 2013 including top-30 finishers senior Kyle Bailey (23rd) and sophomore Brayden Huddleston (27th). Hanover-Horton finished sixth last season with three sophomores and a freshman topping the lineup – four of the top five are back, and the team’s top five this season all finished among the first 13 at their Regional.

After breaking Concord’s two-year hold on Division 4 last season, Saugatuck is expected to extend its streak to two on the strength of four of its top six from 2013. Joe Brown is the only senior; the Indians’ other six runners are sophomores. But Concord will try to take the title back with its top six from 2013 including two-time individual champion Jesse Hersha and last season’s sixth place Jacob Hall, both seniors. Bear Lake/Onekama graduated three of its top four from last season’s fourth-place team, but junior Jordan Anderson was the team’s second-fastest runner at last season’s Final, finishing 19th overall. Freshmen Gary McBride and Kaiden Hejl finished behind Anderson and among the top five at their Regional as the team won with 27 points.

Individuals: Half of last season’s top 20 will run this race Saturday, but Hersha will be tough to chase down. He won last season’s title by 44 seconds, and his 15:32.3 winning time in 2012 is the sixth-fastest in LP Division 4 Finals history. Ellsworth senior Winter Romeyn (ninth) and Beal City senior Nick Pung (10th) join the Concord pair among returning top-10 finishers. Harbor Beach senior Luke Anderson, 13th last season, joined Hersha (15:46) in breaking 16 minutes at last week’s Regional, winning by a minute over Ubly senior Adam Grifka (17th in 2013) in 15:52.