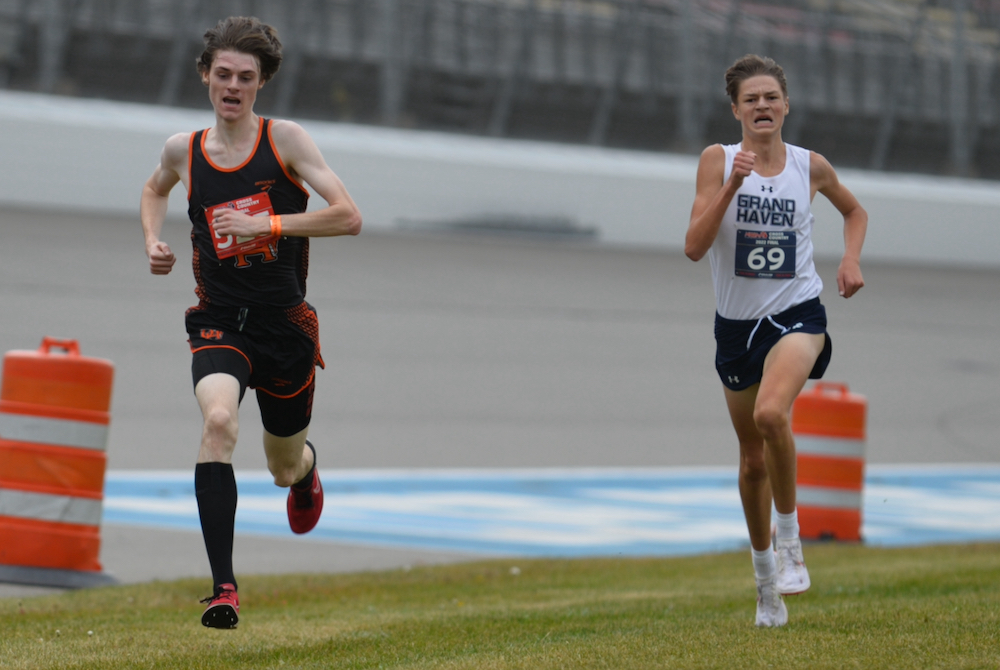 BROOKLYN – Benne Anderson knew he had his hands full with Seth Norder, so he couldn’t allow himself to worry about the strong wind the Grand Rapids-area rivals were running into for nearly 15 minutes Saturday at Michigan International Speedway.

“You kind of just have to ignore it, kind of just push,” Anderson said. “Most of this sport is just mental. You’ve got to lock yourself in and go.”

Anderson, a senior at Grand Rapids Ottawa Hills, and Norder, a junior at Grand Haven, were locked in a sprint to the finish that appeared to be taking place in slow motion because of the heavy winds.

It was Anderson who overcame the elements and the competition to win the MHSAA Lower Peninsula Division 1 championship with a time of 15:17.32. Norder was a close second in 15:18.95.

Anderson was in the lead as the runners came into view from the finish line area. Norder briefly caught him before Anderson won with one last surge.

“Any time you try to pick up the pace, the wind gets faster and faster and is slowing you down,” Norder said. “It’s really tough. I was able to catch up to him. He just had another gear. He’s a really great runner.” 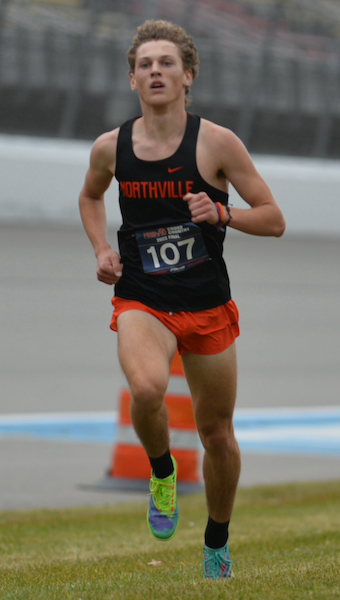 A year ago, the tables were flipped, with Norder placing second in 15:20.0 behind Hartland’s Riley Hough and Anderson taking third in 15:22.9.

“I was nervous,” Anderson said. “Seth is a crazy runner. I’ve been thinking about beating him today for the whole year. I had to get my revenge from last year. He kind of stole that from me.”

Despite running in the same region of the state, it was only the second encounter this season between Anderson and Norder. They raced each other at the Portage Invitational four weeks ago, with Anderson running 14:44.1 to take second and Norder 14:45.4 to place third. The race was won by eventual four-time Division 3 champion Hunter Jones of Benzie Central.

“We’ve been racing together my whole high school career,” Norder said. “We’ve always been back and forth. I figured it would come down to a sprint-off. That’s what it did at Portage. That’s the only time we raced this year. He ended up getting me in a sprint there. I was hoping to get him here, but I came up a little short.”

Northville, which has been a regular at the MHSAA Finals, won its first team championship by scoring 122 points. Traverse City Central was second with 196 and 2021 champion Brighton was third with 229.

Traverse City Central placed Joe Muha (ninth) and Micah Bauer (10th) among the top 10; its next finishers were 47th, 110th and 134th overall.