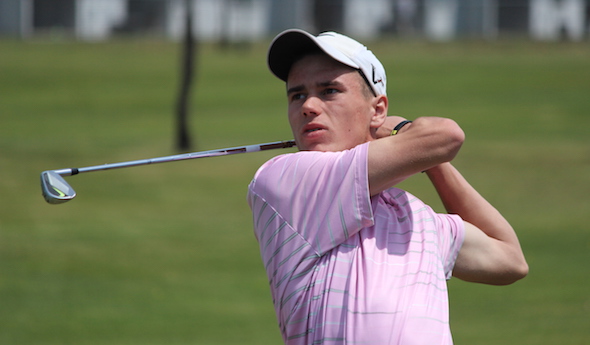 ESCANABA – Hunter Eichhorn is not your typical young golfer. Instead of just pounding drives all over the course, he actually thinks his way around.

The Carney-Nadeau junior, who may be the best of a young core of golfers in the Upper Peninsula, loves to "strategize" his way to low scores. He fired a brilliant 5-under-par 67 on May 16 at Menominee Riverside Country Club, one of the peninsula's most demanding layouts.

He had a career-best 10-under 62 at Royal Scot Golf Club near Green Bay while competing on the Wisconsin Junior Golf Tour in 2015.

"The way he manages his game is quite incredible. He adjusts to the golf course and he adjusts to what the golf course is asking for," said Jacob Polfus, the C-N golf coach. Polfus is also the C-N basketball coach, and Eichhorn was a second-team all-conference selection in 2015-16.

Basketball was his primary sport as a youngster, then he dropped it for golf during grades 3-9 before joining the varsity basketball team the past three years. "I just started loving golf. I enjoy everything about it, the competition, being competitive with other players.

"I love to win and play against good people and beat them. I like meeting new people and making new friends I would never meet if I was not playing the game."

He got into golf with the urging of his grandfather, Steve Pipkorn, who would bring him to Hermansville Wild Pines Golf Course, a 9-hole course about 12 miles from home. Often he would spend the whole day there, getting picked up by his father, Brad, on Brad’s way home from work in Norway.

Escanaba golf coach Brian Robinette, one of only two people ever to give Eichhorn lessons, said those numerous early rounds at "a mom and pop course" were beneficial in those early years.

"He was able to make par and have birdie putts. He played hole after hole out there. It kind of launched his career, shooting good scores at an early age," said Robinette, a former state junior champion and Olivet College Sports Hall of Fame golfer.

Those rounds at Wild Pines were special, Eichhorn agreed. "I play by myself a lot. I can focus on it more," he said of those growing up rounds. He is a self-taught golfer and has never had a swing coach.

With extensive play on U.P. courses – his favorites are Iron Mountain Pine Grove and Harris Sweetgrass Golf Club – and on the Wisconsin Junior Tour, he has developed a solid game that compares well with the region's top adults. He plays in a Tuesday night men's league at Highland Golf Club, near Escanaba, and also gets into Friday evening adult matches there.

Eichhorn may only hit driver twice on some courses, knowing it is important to keep the ball in play. "I like strategizing more than just attacking it with driver," he said with a smile that comes from drives that went astray. "Strategizing is a big part of scoring, finding the right angles into greens. Just knowing what consequences can come out of the swing (with out-of-bounds or water looming on fairways).

"If you don't pull the shot off, it could cost you a shot or two. It is a constant game of learning from all situations. Just a bad thought can cost you."

Eichhorn pounds his drives 280 to 300 yards (a 7-iron flies about 190 yards) but acknowledges, "I hit plenty of shots off-line. I'll admit it." Because of those wayward balls, he said recovering from bad shots is probably the best part of his game, along with chipping and putting. 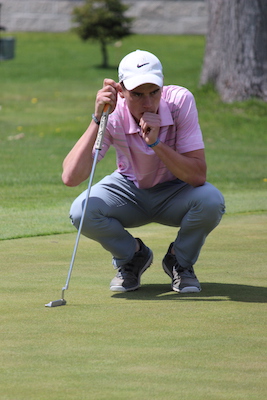 Polfus said "the biggest thing is he doesn't put pressure on to hit driver all the time. He can hit all the shots, and the way he can check it up from certain distances, it is amazing to watch him play. The way he has grown most is how he handles himself when he does hit a bad shot."

Eichhorn admits that wasn't always the case, especially by throwing clubs in his earlier years. "My parents were not thrilled," he said with a chuckle. As he gained experience and age, "I realized it doesn't help your game."

Polfus said Eichhorn's primary growth "is his attitude. He calms himself. You can see him smile more now (on the course). He understands you are going to make mistakes and see how you respond."

Robinette likens his playing style to the transformation seen in golf across the country. "I see very athletic kids who just aren't intimidated by anything. They are fearless," he said, citing PGA Tour standouts Rory McIlroy and Jason Day as examples of that mentality and approach.

"They look down the hole and see birdies everywhere. He (Eichhorn) is fearless. He thinks his way around a golf course very well. He has a good routine; he pays attention to all the details to not make mistakes. His fundamentals are very good. He swings pretty hard, but he is still under control. He doesn't miss the middle of the club face. His misses tend to be pin high."

With a year of high school remaining, he already has some big plans. He will play the Wisconsin Junior Golf Tour again this year along with U.P. junior events and will likely play in the Upper Peninsula Golf Association men's tournament in Sault Ste. Marie.

He played in last year's UPGA event in Marinette, Wis., and learned a lot from that experience. "The competition level was really high. You have to play at even a higher level than you think you can," he said.

He also has big plans after college. "I want to be a professional golfer. I want to be really, really good," he said. "It will take a lot of practice (something he does at a very high level). I'd like to be the best I can be by (age) 22 or 23. I want to give myself a chance to be good on the PGA Tour.

"It will obviously take a lot. I know it is a far-fetched goal, but it is something I am willing to work for. This will give me the reality check, and that is why I'm going to go to college (for a business degree)."

Robinette believes Eichhorn's passion for golf and strong work ethic will help him reach his goals. "The secret for him is in the dirt. He has probably hit more golf balls his age than anybody I've come across. Mike Nagy, maybe," Robinette said of the former Manistique standout who just completed a four-year golf career at the University of Tennessee.

"He (Eichhorn) is a student of the game. He has a very high golf IQ. This is not a social sport for him," Robinette added.

In addition to Eichhorn, the upcoming MHSAA U.P. Golf Finals at three locations will feature several other promising players. Others with excellent promise are freshman Nathan Rousseau of Escanaba, freshman Jordan Jurmu of Marquette, a participant of the chip, putt and drive national finals at Augusta National in April, and junior Bryce Douglas of Gladstone.

PHOTOS: (Top) Carney-Nadeau's Hunter Eichhorn watches one of his shot during a tournament Wednesday at Irish Oaks Golf Course in Gladstone. (Middle) Eichhorn studies the putting line on No. 17 green at Irish Oaks. (Photos by Denny Grall.)