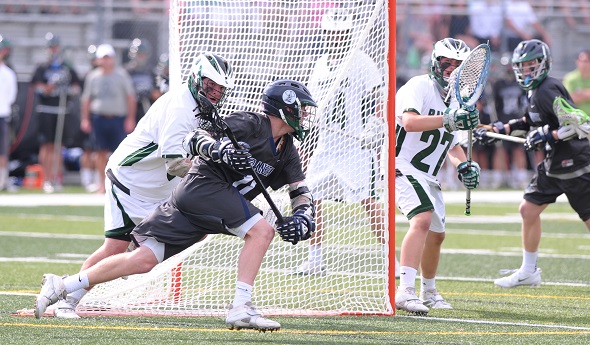 The Cranes reversed that trend in the most important game of the season, and celebrated the program’s first title since 2006 with a 10-9 win over defending champion Forest Hills Central at East Grand Rapids’ Memorial Field.

“We’ve played a lot of one-goal games this year, so we were used to playing in these games,” Giampetroni said. “I think we learned a lot from those tough losses we had earlier in the year. We were confident.”

“Losing all those one-goal games, we learned a lot, especially the overtime ones,” Cranbrook-Kingswood coach Mat Wilson said. “If it had stayed tied and went to overtime, I think from those experiences, we would’ve been in good shape.”

The Cranes got a bit of redemption against Forest Hills Central after being routed 15-5 in the final regular-season game.

The rematch played out much differently.

“We were tired that game, they took it to us early and we struggled a little bit on that day,” Giampetroni said. “That was on our minds, and we wanted to prove we could play with them. They are a strong team, and I think the best team we’ve played, but we played well today and got the win.”

Forest Hills Central rallied from a 9-6 deficit with fewer than seven minutes remaining in the fourth period.

A goal by Forest Hills Central’s Neil Cunnigham tied it at 9-9.

“We got it close and had some momentum, but it was squashed with that goal with 20 seconds left,” Rangers coach Tony Quinn said. “Our goalie made a nice play on it, but the momentum of the shot carried it over.”

Said Giampetroni: “I saw it go over the goal line, and I was hoping they saw what I was seeing. I was excited, but I needed to contain it because we still had 20 seconds left and we needed to finish it.”

Wilson said the parity of the division was evident in the Finals.

“We could’ve easily shown up today and they could’ve beaten us 15-5 again; they are that good,” he said. “But that’s what is cool about this year. Everybody had a chance at this thing going into it.”

Forest Hills Central (17-4) was aiming to defend its MHSAA championship from last season, when it beat Detroit Country Day 7-6 for the program’s third title.

Instead, the Rangers were handed their second loss in a Final. They finished runner-up to East Grand Rapids in 2008.

“It’s our goal every year (to win an MHSAA championship), and we tied it up with a minute to go and we had the ball,” Quinn said. “We felt like it was going to be our day, and it wasn’t. It’s hard, and it’s going to take us a while to get over it.

“Credit to Cranbrook, they played great today, and hopefully this will give us some incentive to get after it again next year.”

FHC fell behind 3-0 in the first period, but scored three straight goals in a span of two minutes to pull ahead 5-4.

Cranbrook-Kingswood answered with its own run to end the half, and the Rangers trailed 7-5.

The Rangers had an opportunity to send the game to overtime in the waning seconds, but misfired on a high shot as the clock ticked away.

“They are an explosive offensive team, and even with 10 seconds we knew we had to lock down defensively and focus,” Wilson said.

Two of Forest Hills Central’s three losses were against teams from Indiana. Its lone in-state loss before Saturday was to East Grand Rapids.

PHOTO: Cranbrook-Kingswood's Jason Miller (11) circles the goal while the Rangers give chase Saturday.