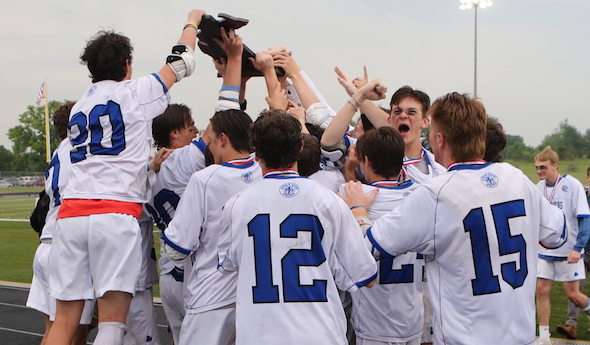 HOWELL - There was never a doubt in Joey Kamish’s mind.

And certainly not when his second straight tied the game, 10-10, with just under four minutes to play in the game.

“When this team gets momentum, there’s nothing that can stop us,” Kamish said. “Right after we scored a couple and everyone was getting hyped up and there was a lot of energy on the bench, I just knew this was going to be our first state championship.”

The win by the Shamrocks snapped the Warriors’ incredible 13-year championship streak, which dated back to 2005, the first season the MHSAA began sponsoring a postseason tournament for the sport.

“I’ve been on the team for four years and I knew we were closing the gap,” said Catholic Central senior Pete Thompson, who had been part of the past three Shamrocks teams that had lost to the Warriors in the Division 1 title game. “In previous years, I felt like we were a bunch of individuals that were really good. But Brother Rice is such a great team, such a strong program, that you can’t beat them with a bunch of individuals. We all wanted this more than anything, any individual goals, and this was a culmination of a great team.”

The win was the Shamrocks’ third over Brother Rice (13-8) this season. They had beaten the Warriors, 10-9, during the regular season and again, 11-8, in the Catholic League championship game.

This one may have been the toughest victory yet for Catholic Central. The Shamrocks built early leads of 3-0 and 5-1 thanks to two first-period goals by Pattinson and two second-period goals by Kamish.

But Brother Rice did not fold. Three goals in a span of 1:58 by sophomore Jordan Hyde, junior Justin Glod and sophomore Pat O’Hara – followed by another goal from sophomore D.J. Dixon – knotted the game at 5-5 heading into halftime.

“We’ve battled all year,” Brother Rice coach Ajay Chawla said. “I’ve got to give it to the boys, they didn’t give up. They fought ‘til the end, and they gave it their all.”

Catholic Central built another two-goal lead early in the second half on goals by Kamish – who finished with five in all – and sophomore Ryan Sullivan. But Rice went on a run, scoring the next five goals to take a 10-7 lead. Dixon and O’Hara had two goals each.

In the end, however, the top-ranked Shamrocks (19-2) had just enough to capture the school’s first MHSAA lacrosse championship.

“Any coach will tell you that lacrosse is a game of runs and they went on their run, and we always know we have to weather their storm and we’ll get one,” Catholic Central coach Dave Wilson said. “We have a very deadly offense, and they just need the ball. Once we could get the ball a bit, we know it’s going to make its way into the back of the net.”

“A streak is not going to last forever,” Chawla said. “These guys worked their butts off all year, and we just didn’t have it when we needed it. It’s what happens when you don’t play a complete game.

“You’ve got to hand it to (Catholic Central), their big players, Kamish, Thompson and Pattinson, they stepped up when they needed to at the end of the game. Coach Wilson coached a good team this year. Hats off to them.”

For Wilson, whose program was 0-7 against Brother Rice in MHSAA championship games, Saturday’s victory was very special.

“It’s a bit of relief, but it just feels great to see the fruition of a lot of hard work come together,” Wilson said. “People always go through the perfect storm, ‘What do you want to do, who do you want to play?’ We don’t care who we play; we just want to win a state championship.

“But it feels good to beat Rice.”