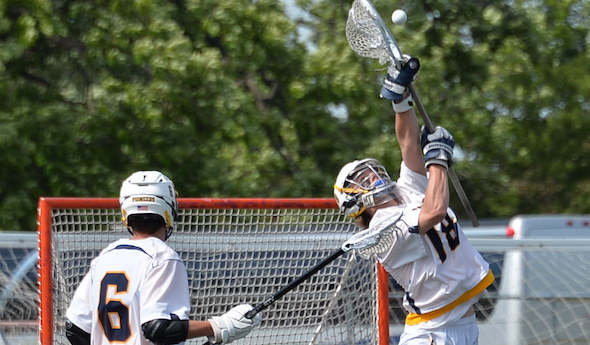 HOWELL – If the “dog’s gotta eat,” as the expression goes, consider Hub Hejna permanently satisfied with the final feast of his high school lacrosse career.

East Grand Rapids senior attacks Hejna, Ben Keller and Luke Elder earned the nickname “dogs” from coach Rick DeBlasio earlier this season. And if there ever was a time to feed, Saturday’s Division 2 Final fit the bill.

The dogs combined to score eight goals, with Hejna’s last coming with two minutes to play as rival Grand Rapids Forest Hills Central was on a three-goal run. That last score ended up a little more insurance as the Pioneers closed out an 11-9 win and first MHSAA title in this sport since 2009 after finishing runner-up to the Rangers a year ago.

“It’s just part of the system,” Hejna said. “He came to calling us that, and whoever can get it done, just put it in the back of the net.

“It’s kinda goofy. But when a guy like that says something, you just roll with it, see where it goes.”

It went a lot farther than the last day of the season a year ago, when the Pioneers scored only six goals to Forest Hills Central’s 10 – although of those six, Hejna, Keller and Elder combined for five.

This season, entering this week, the trio had scored a combined 184 goals over 17 games. In Saturday’s Final, Hejna scored the team’s first two and four total, while Keller had three and Elder added one.

Forest Hills Central actually opened a 2-0 lead before Hejna’s two goals over the final 2:36 of the first quarter and Keller’s two over the first six minutes of the second gave East Grand Rapids a 4-2 lead that it never would relinquish, although the Rangers pulled within a goal three times.

But unlike in Wednesday's overtime Semifinal win over Detroit Country Day in which it trailed by four at one point, Forest Hills Central fell just short of turning the tide.

“We’re blessed this year with probably the three best attack guys in the state, as a group,” DeBlasio said. “There are other kids like Bryce (Clay of FHC) who are excellent. (But) when you put them all together, our three, we call them the dogs. And our whole attitude is just feed the dogs and make sure we enable them to go.” 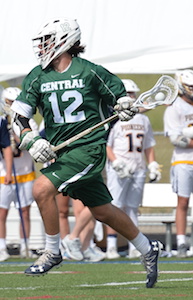 East Grand Rapids had avenged last season’s championship game loss to Forest Hills Central with 15-13 and 16-9 wins this spring in finishing first just ahead of the Rangers in the Ottawa-Kent Conference Tier 1 standings.

But that didn’t mean the Pioneers (18-1) went into Saturday overconfident – not against an opponent they knew so well.

Junior Eric Solberg added a pair of goals for the Pioneers.

“We had to play flawlessly to beat them, and obviously we got down in a position early that we didn’t want to be in,” FHC coach Patrick Clay said. “But given the situation from Wednesday we felt we could keep believing and we came up just a little short today.

“We talked about opportunity. Today we put ourselves in an opportunity to win.”