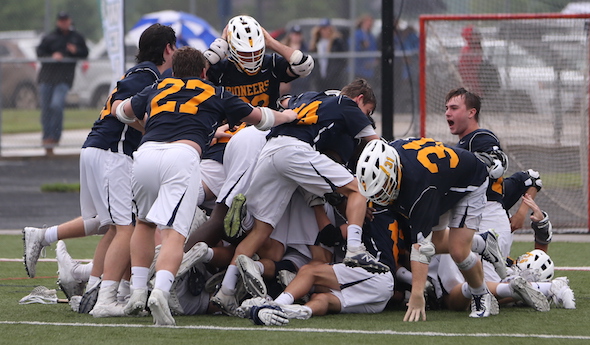 But even the veteran coach had to be impressed with the offensive exploits of his high scoring tandem of seniors Eric Solberg and Chris Owens.

Solberg tied an MHSAA championship game record with six goals and Owens netted the game-winner as the Pioneers won their second straight Division 2 title with an 11-10, double-overtime victory over Grand Rapids Forest Hills Central on Saturday at Parker Middle School in Howell.

“When he gets his hands free and sweeps, and if you give him a half a step, it’s over,” said DeBlasio, talking of Owens, the team’s leading scorer this season. “For him to get the game-winning goal, it was really special. It’s something the whole team celebrates.”

The game-winner, which came with 2:04 left in the second overtime, may have caught the Rangers by surprise – and some of Owens’ teammates as well.

“We had decided to settle it down, maybe get on offense, but I saw an opening and I just took a shot,” said Owens, taking in the moment just minutes after being swarmed by his teammates on the north end of the field. “It’s crazy, all these people watching. It feels really good to finish it off.”

It seemed like neither team would be able to finish things off. East Grand Rapids looked like it was going to close out the game in regulation, only to see Forest Hills Central tie it up at 10-10 on a goal by junior Luke Majick with 33 seconds remaining.

“To get back to this game, after what happened last year, has really been a driving motivator for us this year,” Rangers coach Andy Shira said. “Obviously our guys didn’t want to lose (the game). Especially against East Grand Rapids, we’re not going to go down without a fight.”

That was evident throughout the game.

Forest Hills Central kicked off the scoring less than five minutes in, with senior Tobey Hendricks scoring off a pass from Majick. But East Grand Rapids would answer, with Solberg scoring a pair of goals to cap off a low-scoring first quarter. 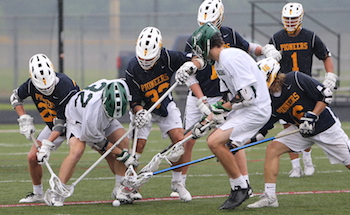 Forest Hills Central and East Grand Rapids then went on a scoring binge, combining to tally seven goals in just less than four minutes, the last three scored by the Pioneers. Solberg had three of them, Owens had the other, giving their team a 6-4 lead at halftime.

Though the Pioneers continued to maintain a lead into the fourth quarter, Forest Hills Central would not go away. On three occasions, the Rangers tied the game up. Junior Tate Hallock scored two of those tying goals, with Majick scoring the other.

Hallock finished with four for Forest Hills Central (18-2), while Majick and senior Patrick English each had two. Seniors Hendricks and Bryce Clay each added one goal for the Rangers, who entered the postseason as the top-ranked team in Division 2.

It was the third straight year the two schools played for the Division 2 title, with the Pioneers winning last year and the Rangers picking up the 2016 title. Central had defeated East Grand Rapids, 14-7, earlier this season.

“They executed a little bit more (today),” Shira said. “Everything they did today, we’ve seen on film. We just didn’t execute as much as them. We had our chances, but they’re an excellent team, very well coached.”

The championship was the fifth for East Grand Rapids (19-4), which also won titles from 2007-09 and again last year.