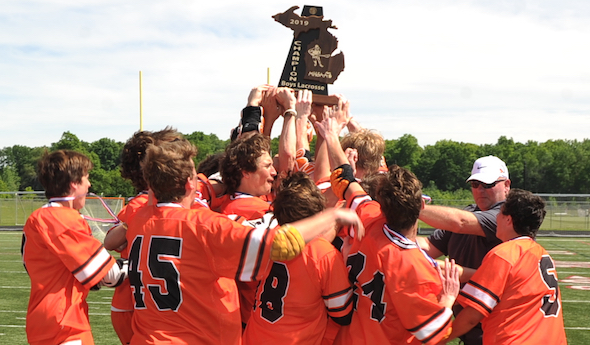 By Jeff Bleiler
Special for Second Half

He wasn’t about to endure that pain again with his senior season winding down.

With his Bloomfield Hills Brother Rice team trailing by one against reigning champion Detroit Catholic Central and the clock ticking precariously close to zero, Glod scored the game-tying goal with 1:55 left in regulation. He followed it with the championship-winner with one second to play Saturday at Parker Field in Howell to complete the Warriors’ fourth perfect season in school history and add their 14th Finals championship trophy in 15 seasons.

When Glod’s game-winner crossed the goal line to put his team ahead 14-13, he was chased down and mobbed by teammates.

“I turned back to the crowd, put my hands up. It was the best feeling in the world,” Glod said. “I saw my teammates run after me. It was incredible. I lost a state championship last year, so I went from the lowest of the lows to the highest of the highs.”

“We had to hold for the last shot, and we knew if we had the ability to shoot and score, it’s gonna happen,” Brother Rice coach Ajay Chawla said. “We ran through a play, missed a shot with eight seconds to go, and at that time you got to put it in the guys’ hands, the ones you can trust. Joey’s been there before, he’s a senior, he’s a leader. It’s awesome.”

Catholic Central took a 13-12 lead with 2:29 to play on Joey Kamish’s sixth goal of the game, on an assist from fellow senior Ryan Birney.

It marked just the third Catholic Central goal of the second half after the Shamrocks netted 10 in the first half.

Glod then tied the game with a shot from a sharp angle, and the Warriors got the all-important possession on the ensuing faceoff, milking the clock until there were 15 seconds left. A missed shot with eight seconds to play set up Glod’s heroics.

“Obviously we’d prefer to have the ball there at the end, but they got it,” Catholic Central coach Dave Wilson said. “They timed it well, they played it well. I think the ball just went in. So it was close, it was close all the way through. If you give Brother Rice extra opportunities, they’re going to capitalize.”

Catholic Central quickly captured its opponent’s attention by opening the scoring on a goal by Birney with 7:53 to play in the first quarter. After Pat O’Hara’s goal tied the game for Brother Rice a minute later, Kamish scored back-to-back goals 22 seconds apart to put the Shamrocks in front 3-1. 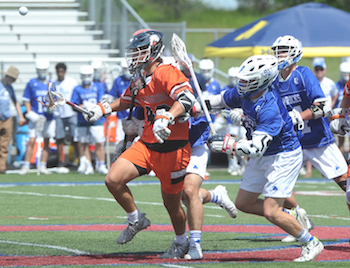 O’Hara’s second goal of the first quarter pulled Brother Rice within one with just over three minutes to play in the opening frame before Ryan Sullivan reestablished a two-goal Shamrocks lead with 1:31 to play. Kamish’s third of the quarter with six seconds left saddled Brother Rice with a four-goal deficit to start the second.

True to form, the Warriors were swift to answer, scoring five straight goals over the first 6:43 of the second quarter. O’Hara, DJ Dixon, Dylan Braddock and Michael Cosgrove all found the back of the net, with Braddock scoring twice. His second put the Warriors ahead 7-6, and the Shamrocks appeared to be reeling.

But the last four minutes of the second quarter were starkly different than the first eight minutes for the Shamrocks, who had only a handful of possessions in the early going of the quarter with most ending in missed shots, turnovers or balls in goalie Dom Dadabbo’s mesh.

Birney found pay dirt with four minutes to play to knot the game and again three minutes later to put Catholic Central in front again. Connor Beals’ goal with 1:04 to play in the half came just seven seconds after Birney’s, and Kamish put an exclamation point on the first half with a goal with six seconds to play to give the Shamrocks a 10-7 halftime lead.

Glod scored less than two minutes into the third quarter, and Dixon capitalized on a Shamrocks penalty with eight minutes to play to pull Brother Rice within 10-9. Kamish scored his third late-quarter goal, this time with 29 seconds to play in the third to make it 11-9 Catholic Central entering the final quarter.

Dixon and Braddock scored early in the fourth to square the game, before Birney scored and Jacob Hanewicz answered to keep it tied. Kamish then put Catholic Central ahead 13-12 with his final goal.

“Those last 3 minutes, I was kind of in shock,” Glod said. “It’s been an incredible ride. Ever since the day after the last state championship game, we got at it. We had this in mind the whole year. We knew we were going to get back here and knew we had to do everything we could to win this game, and it happened.”

Wilson had a simple message for his heart-broken team postgame.