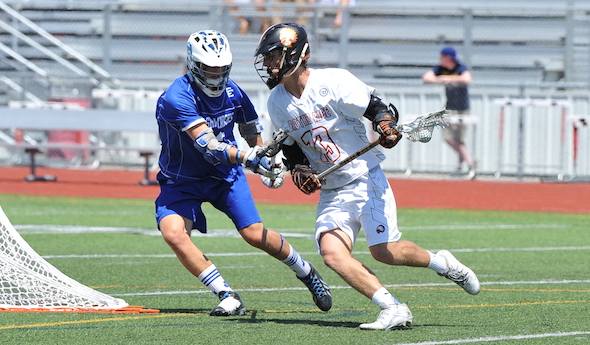 TROY — Morgan Macko is being modest when he says there are no superstars on this year's Birmingham Brother Rice lacrosse team.

Macko scored five goals and added an assist, as Brother Rice extended one of the most dominant dynasties in MHSAA history with a 16-7 victory over arch rival Detroit Catholic Central in the Division 1 championship game Saturday at Troy Athens.

The Warriors have won all 11 MHSAA Division 1 championships, going 54-0 in postseason play during that time. They are 159-1 against teams from Michigan since 2005, the lone loss being an 8-7 overtime decision at Detroit Country Day on April 16, 2014. Brother Rice, which tests itself regularly against strong opposition from Indiana, Ohio and Ontario, has a 223-27 overall record in those 11 seasons.

"There's a tremendous amount of pressure," Brother Rice coach Ajay Chawla said. "I'd be sitting up here not telling you the truth if I told you they didn't feel it. They feel it. Every year, they don't want to be the guys that let the legacy down. We didn't shy away from talking about it. We didn't treat this like another game. We understood this was a state championship."

And nobody understands how to raise the level of his game with a championship on the line better than Macko.

Last year, Macko tied a Finals record shared by two other Brother Rice stars by scoring six goals in a 23-7 victory over Catholic Central. Like last year, Macko scored all of his goals in the first three quarters, not as stat-stuffers in the final minutes.

"It's really fun playing on these big stages in front of a pretty big crowd," said Macko, a junior who was brought up to experience the postseason as a freshman. "You feed off each other's energy, and it's a lot of fun out here."

Three of Macko's goals came during a back-and-forth second quarter in which Brother Rice held off a Catholic Central charge. His fifth goal, which opened the second-half scoring and increased Rice's lead to 11-4, was called the biggest goal of the game by his coach. 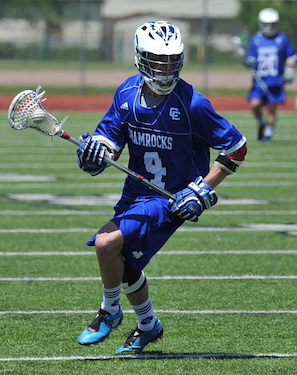 "He's a big-game player," Chawla said. "He finishes well. He produced for himself, but he also was the recipient of a lot of great dodges by a lot of guys. It's our unselfish plays that allow him to get goals when his guy slides off him and we find him. Overall, it was a great performance by Macko, but you have to credit that whole offense. The score speaks for itself."

Macko finished with a team-high 63 goals this season. He was one of four Warriors to record hat tricks in the game, with Bo Pickens, Riley North and John Lockwood all scoring three goals. It was the second Finals hat trick for Lockwood.

"There are just weapons everywhere," Macko said. "There are no superstars. The defense can't focus on one guy. You have to worry about everyone. There are threats all over the place."

So, even though Macko had six goals against them in last year's Final, the Shamrocks knew they couldn't sell out just to stop him.

"They have so much depth," said Catholic Central junior Rocco Mularoni, who scored five of his team's seven goals. "They play really well as a team. You can't pick out one individual guy to shut down."

Catholic Central (17-5) started strongly enough, opening the scoring on a goal by Mularoni with 9:15 left in the first quarter. Shortly after tying the score 1-1 on a goal by Pickens with 7:20 left in the first, Brother Rice called timeout. The Warriors came out of the timeout on fire, scoring two goals 34 seconds apart to grab a 3-1 lead. Brendan Kennedy and Lockwood scored to extend the lead to 5-1 after one quarter.

Just when it appeared a rout was in progress, Catholic Central restored some drama to the game by scoring three times in a 43-second span to make it an 8-4 game with 7:23 left in the second.

The Warriors regrouped with goals by Pickens and Macko in the final 1:30 of the quarter to take a 10-4 lead into halftime.

"I don't think we were very worried," Chawla said. "Our guys had to settle down a bit. We know they play on streaks and emotion. Once our guys settled down, we got those two at the end of the half, which were huge goals for us. That took a bit of the momentum back."

Brother Rice had the only two goals of the third quarter, with Macko scoring with 9:48 left and North with 25.8 seconds to go.

North's third goal increased Brother Rice's advantage to 15-4 with 9:01 left in the fourth quarter, getting the lead within one goal of invoking a running clock. Mularoni ensured that wouldn't happen, scoring two goals 57 seconds apart to make it 15-6 with 6:57 left.

Goals by Pickens of Brother Rice and Zach Crawford of Catholic Central completed the scoring.

Catholic Central has lost to Brother Rice in the Finals five times and in the Semifinals once.

"We seemed to turn it over a lot against Rice," Shamrocks coach Dave Wilson said. "We know when we have the ball we're going to score; at least that's how we do against 99 percent of the other teams in the state of Michigan."

The Warriors' streak of dominance doesn't appear likely to end any time soon. They are set to return seven of their nine starters from the championship game, including Macko.

And there are always players who have yet to wear the Brother Rice uniform waiting in the wings, eager to carry on the tradition.

"If you come in and can play, you can play,” Lockwood said. “We have a lot of younger kids who are going to come up and keep getting better."