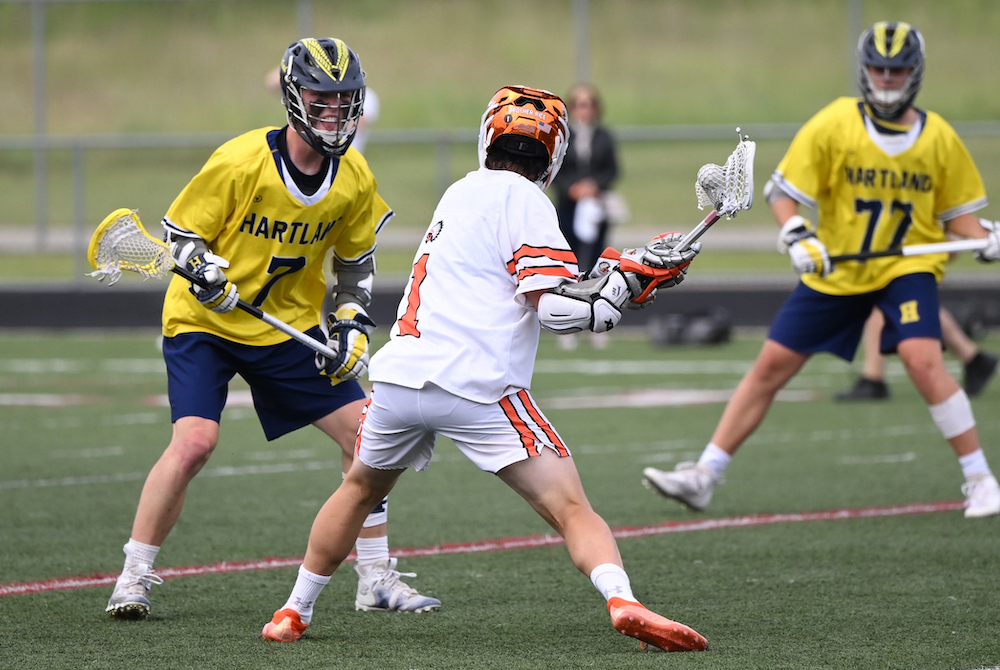 HOWELL – With 12 minutes to play Saturday, Hartland (19-4) could see the finish line with a two-goal lead against Bloomfield Hills Brother Rice, the dynasty in Division 1 lacrosse.

Rice rallied to tie the game at 10-10. The game eventually went into overtime, when Hartland became the first non-Detroit Catholic League team to earn the Division 1 title on Bo Lockwood’s goal to pull out a dramatic 11-10 victory at Parker Middle School Stadium.

“I don’t know if I’ll go to sleep tonight,’’ said Lockwood. “I have been dreaming of this my whole life. Glory to God. I’m just so grateful.

“On my goal it was a great pick by Mac Tognetti. They had been playing well on me the whole game. I got an opportunity, and I buried it.’’

Hartland was attempting to avenge last year’s 14-9 Division 1 loss in the championship game. Rice had won 15 of the 16 title games played in Division 1, succumbing only to Catholic League rival Detroit Catholic Central 11-10 in 2018.

“They worked their butts off,’’ Rice coach Ajay Chawla said. “Hartland got the last goal today. I thought it was a pretty even game, back-and-forth. We had many opportunities at the end to win. We couldn’t convert at the end. We took a bad shot. We’re a young squad. We made a number of mistakes. It’s sad for our seniors. We’re going to be a force to be reckoned with next year.’’

For now, it was Nick Levanti’s team’s time to celebrate. 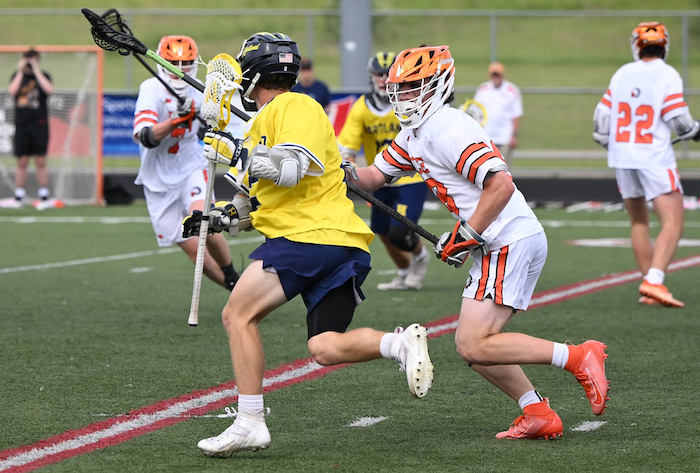 “The opponent isn’t as much to us game in, game out,’’ the Hartland coach said. “Obviously they are a great team. An historic program in Michigan. We looked at the game as focusing on what we could control. We were making some mental mistakes, but our confidence was high.

“Bo has done stuff like that since I met him as a freshman back in 2019. That’s just every day for Bo Lockwood.’’

Hartland dominated the offensive end for the first seven minutes and finally hit pay dirt when Lockwood scored to give the Eagles the first score. The lead didn’t last long as Rice’s Cashton Papadelis scored seconds later to tie the game, 1-1.

Ryan Krause responded for Hartland to put the Eagles up 2-1. He finished with three goals.

Rice junior Will VanLear tied the score near the end of the first quarter, but Krause countered with his second goal to give the Eagles a 3-2 lead. Teammate John Weber added another, and Joey Mattord opened up a three-goal advantage for Hartland, 5-2 with 10:45 to go in the first half.

Christian McNulty ended the Rice scoring drought with a goal to trim the deficit to 5-3, and Papadelis scored his second to get Rice within a goal with 3:08 left in the half. But Tognetti ended it on a high note for the Eagles, scoring just before the buzzer to give Hartland a 6-4 halftime advantage.

Rice (15-6) got an immediate third-quarter spark from Luke Washe, who scored his first goal of the championship to trim the deficit to 6-5. Rice erased the deficit completely when Sam Klein tied the score at 6-6. With momentum clearly on the reigning champs’ side, Papadelis scored his third goal to give Rice its first lead at 7-6 with 8:32 to play in the period.

Krause delivered his third goal for Hartland to tie the score, 7-7. Dylan Ayotte regained the lead for the Eagles with a goal to make it 8-7 with 5:12 still to play in the third.

Klein scored his second goal to tie the game 8-8. Drew Lockwood regained the advantage for Hartland with a goal with 2:38 left in the third. Brother Bo Lockwood followed suit 30 seconds later to give Hartland a two-goal lead.

McNulty scored with a little more than eight minutes left to cut the Rice deficit to 10-9. With 3:55 left in regulation, Sam Klein scored his third goal to tie the game 10-10.

The next goal was Lockwood’s overtime winner. Lockwood also finished with four assists, and Hartland finished the season 18-4.

“I dreamt of this my who whole life,’’ said Krause. “It’s nice to finally see it pay off.’’