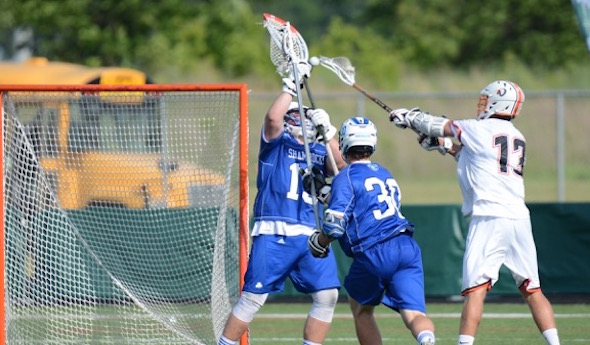 HOWELL — Ideally, the morning of a championship game arrives with as little stress as possible.

But junior Nick Dudley didn't catch a break with the timing of two important events in his life.

On the day that he took the field in the MHSAA Division 1 lacrosse championship game, he had to get up early and take the ACT test at Royal Oak Shrine High School.

"I think I did pretty well," said Dudley, who cites English as his strongest subject.

He will find out for sure soon enough.

But there is no disputing his performance on the lacrosse field later in the day.

Dudley completed his test at noon, was on the team bus to Howell at 1 p.m. and scored four goals for Birmingham Brother Rice in a 10-8 victory over rival Detroit Catholic Central on Saturday at Parker Middle School.

It was Dudley's first championship as a participating player, after being brought up to the varsity for last year's tournament. It was the 12th for Brother Rice in as many MHSAA tournaments. Only East Grand Rapids' boys swimming and diving team (15 straight in Class B-C-D from 1948-62) and Grosse Pointe Woods University Liggett's boys tennis team (13 straight in Class C from 1972-84) have won more consecutive MHSAA titles.

"Going into my senior year, there's pressure, but you've got to overcome it and keep going," Dudley said.

Chances are, Catholic Central will have a say in whether or not Rice's championship streak reaches 13.

The Shamrocks (17-5) have lost to Rice in the last three Division 1 championship games, and are 0-6 all-time against the Warriors in the Final.

"I will say, from our perspective, it's not a matter of if, it's just a matter of when," 11th-year Shamrocks coach Dave Wilson said. "We feel confident in that. We are working very hard. My hat's off to Brother Rice. They played a phenomenal game. They're a fantastic team, but we will carry on."

The only Michigan team to beat Brother Rice since the MHSAA began sponsoring lacrosse in 2005 was Detroit Country Day, which won 8-7 in overtime in a regular-season game on April 16, 2014. The Warriors are 174-1 against in-state teams during that span, including 59-0 during MHSAA tournament games.

Few of those 59 victories were as tightly contested as Saturday's. 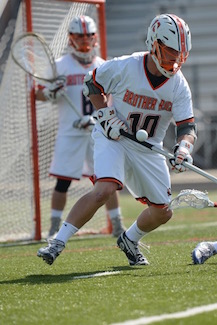 Catholic Central, which lost 11-5 and 14-7 to Brother Rice during the regular season, established an early tone by scoring the first goal on a shot by sophomore Peter Thompson with 7:11 left in the first quarter. It was the only lead the Shamrocks would possess, but the score was tied five times and the margin was one goal or less for the first 29 minutes of the game.

"You want to feed the guy that's hungry and the ball's going in the net," Wilson said. "If we had more opportunities to get him the ball, we could've done a little more."

While Dudley and Thompson filled the net, the goal-scoring stars from last year's Division 1 Final performed admirably as set-up men.

Macko, whose 11 goals over the last two MHSAA Finals are a two-game record, had one goal and four assists for Rice (20-2). Catholic Central's Rocco Mularoni, who scored five goals in last year's Final, had no goals and three assists.

The Macko-to-Dudley combination struck for back-to-back goals after Catholic Central's Collin Burgin tied it 5-5 just 33 seconds into the third quarter.

Dudley scored two goals one minute apart off passes by Macko to make it 7-5 with 6:53 left in the third for the first two-goal lead of the game.

"His vision is amazing," Dudley said of Macko. "It was him."

The Warriors broke it open to 8-5 on Ryan Scott's second goal of the game with 5:38 left in the third.

The Shamrocks weren't ready to concede another championship to Rice, however, getting within 8-7 with 3:52 left in the third on goals by Brennan Kamish and Thompson just 28 seconds apart.

Macko's only goal, on a patient individual effort around the net, made it 9-7 heading into the final quarter.

Cole Hyde re-established a three-goal lead for Rice with 7:41 remaining. Kamish's second goal got Catholic Central within 10-8 with 4:33 left. Mularoni rang a shot off the post with 3:03 left and Thompson had a shot stopped by goalie Teddy Lievois with 2:23 to go.

Rice was able to milk the clock down to 30 seconds following that save, leaving the Shamrocks no time for a comeback.

"They came in, they were inspired," Rice coach Ajay Chawla said. "We fought hard. CC's going to play hard against Rice every time they come in. We expected it. Coach Wilson did a nice job getting those guys ready. At the end of the day, we knew we were going to have a dogfight on our hands. The nice thing is we've played tough teams this year. We've been in these situations. Our guys were able to pull it out."