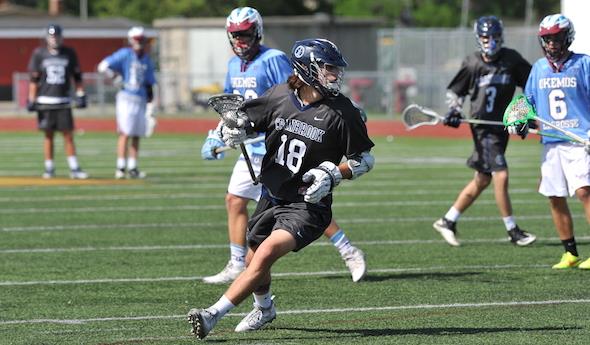 The final half-minute of the 2015 Division 2 boys lacrosse championship game played out in an unbelievably similar fashion to the concluding 30 seconds just two seasons before for Bloomfield Hills Cranbrook Kingswood.

Once again, the Cranes faced a 9-9 tie as they gathered for a final shot. And this time it was Johnny Wagner who sent it into the net, pushing his team past Okemos for a 10-9 season-ending victory.

Wagner had scored the game-winner just three days before when Cranbrook defeated Grand Rapids Forest Hills Central in their Semifinal. This time, Wagner clinched the championship by scoring his fifth goal of the game with 10.5 seconds to play after Okemos had tied the score with three straight goals – again, similar to Cranbrook’s 2013 title game win over Forest Hills Central.

"I did not see it go in," Wagner said during that June 7 postgame. "I thought the goalie saved it and everyone started jumping all over me. I got hit. I was shooting off my back foot. (But) I'm not complaining."

Wagner, who had scored three goals in the 2013 championship win as a sophomore, went on to play at Marquette University.

Click for coverage of the 2015 Final from Second Half and watch Wagner’s winner below from the NFHS Network.