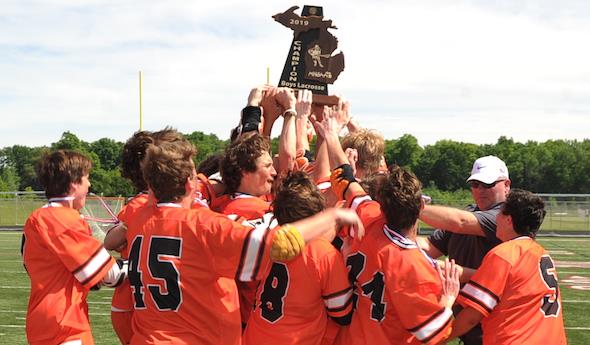 Justin Glod’s first goal during last season’s Division 1 Final didn’t come until the first few minutes of the second half.

But his second and third goals that afternoon have joined the most memorable in a long line of historic scores for the Bloomfield Hills Brother Rice boys lacrosse program.

Glod answered a Detroit Catholic Central goal 34 seconds earlier to bring the game back to a tie at 13-13 with 1:55 to play. He then scored the decider with one second remaining for a 14-13 title-clinching win that avenged a one-goal Final loss to the Shamrocks from 2018.

“I turned back to the crowd, put my hands up. It was the best feeling in the world,” Glod said that day. “I saw my teammates run after me. It was incredible. I lost a state championship last year, so I went from the lowest of the lows to the highest of the highs.”

The Detroit Catholic League rivals have met in the Division 1 championship game nine times, including the last six seasons. The Warriors trailed by as many as four goals during this latest matchup.

Glod is continuing his career at Harvard.

Click for coverage from Second Half and watch the winner below from the NFHS Network.