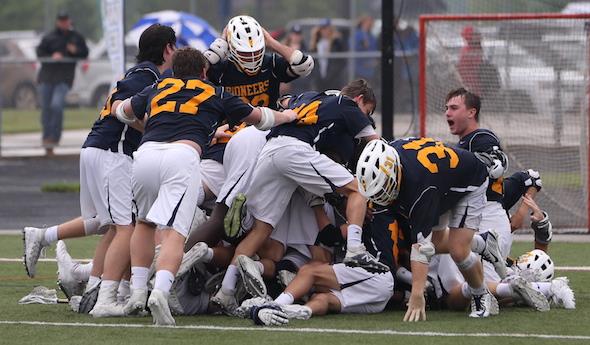 Eric Solberg tied the MHSAA Final record with six goals to set up East Grand Rapids to repeat as Division 2 champion in 2018.

And Chris Owens’ bouncer into the net with 2:04 left in second overtime finished the perhaps unexpected 11-10 Pioneers’ win over Grand Rapids Forest Hills Central, which had doubled up EGR 14-7 earlier that spring.

“We had decided to settle it down, maybe get on offense, but I saw an opening and I just took a shot,” Owens said shortly after. “It’s crazy, all these people watching. It feels really good to finish it off.”

East Grand Rapids also had defeated FHC 11-9 in the 2017 Final after the Rangers took their Division 2 championship matchup 10-6 in 2016.

Click for coverage of the 2018 Final from Second Half and watch the winner below from the NFHS Network.