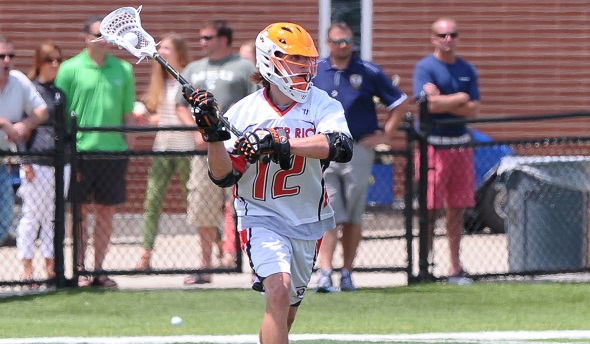 Some things change. Others stay the same.

For the first time in the decade of MHSAA Lacrosse Finals, all four boys teams playing for championships are from the Detroit area.

But Birmingham Brother Rice, despite losing its first in-state game this spring since lacrosse became an MHSAA sport in 2005, is back in the Division 1 championship game. The Warriors have won all nine Division 1 boys lacrosse titles.

The Division 2 Final begins at 2 p.m. at Troy Athens, followed by the Division 1 Final at 4:30. Click for more information including all results from this season's tournament. Both finals also will be streamed live on MHSAA.TV and broadcast on MHSAANetwork.com.

Here's a brief look at the four teams vying for titles (player statistics do not include Semifinals):

BIRMINGHAM BROTHER RICE
Record/rank: 18-4, No. 2 at end of regular-season
League finish: First in Detroit Catholic High School League Division I
Coach: Ajay Chawla, first season (18-4)
Championship history: Nine MHSAA championships (most recent 2013).
Best wins: 11-6 over No. 8 Brighton (Regional Semifinal), 16-4 over No. 6 Troy (Regional Final), 12-3 over No. 9 Birmingham United, 15-9 and 12-8 over No. 4 Detroit Catholic Central, 8-7 over Division 2 No. 1 Detroit Country Day, 20-8 over Division 2 No. 5 Cranbrook-Kingswood.
Players to watch: Jason Alessi, sr. M (65 goals, 37 assists); Joe Dudley, sr. A (57 goals, 19 assists); Reid Fisher, sr. M (45 goals, 17 assists).
Outlook: On one hand, Brother Rice fell to a Michigan team, 11-9 to Detroit Country Day. On the other, Brother Rice had already beaten Country Day once and won both meetings with Catholic League rival Detroit Catholic Central, Saturday’s opponent. The Warriors had a new look this spring with a first-year coach and a number of new contributors filling in for graduated all-staters. But Alessi will finish his career as one of the leading scorers in MHSAA history, Chawla coached the junior varsity team previously, and Brother Rice always has plenty of talent to fill in the lineup. Sophomore Morgan Macko and junior John Lockwood had 29 and 28 goals, respectively, heading into this week.

DETROIT CATHOLIC CENTRAL
Record/rank: 15-5, No. 4 at end of regular season
League finish: Second in Detroit Catholic High School League Division I
Coach: Dave Wilson, ninth season (116-60)
Championship history: Division 1 runner-up 2010, 2007 and 2006.
Best wins: 15-14 (OT) over No. 1 Grand Rapids Forest Hills Northern (Semifinal), 18-11 (Regional Final) and 11-9 over No. 3 Clarkston, 21-7 over No. 8 Brighton, 14-13 over Division 2 No. 2 Grand Rapids Forest Hills Central, 14-9 over Division 2 No. 4 East Grand Rapids.
Players to watch: Jack Van Acker, sr. A; Connor Holton, sr. D (Statistics not submitted.)
Outlook: Despite two losses to Brother Rice this season, DCC gave the Warriors a run in the Catholic League championship game, falling just 12-8, and beat the best of the rest to advance to this weekend. In fact, the Shamrocks fell by 10 to Forest Hills Northern in the regular-season finale before avenging that loss in the Semifinal. Van Acker and Holton both earned all-state honors last season as the Shamrocks won their first Regional title since 2010.

DETROIT COUNTRY DAY
Record/rank: 16-6, No. 1 at end of regular season
League finish: Does not play in a league.
Coach: Michael Cappelletti, first season (16-6)
Championship history: Division 2 champions 2011 and 2005; runner-up 2012.
Best wins: 11-8 over No. 4 East Grand Rapids (Semifinal), 16-3 over No. 9 Warren DeLaSalle (Regional Final), 22-1 over No. 10 Tecumseh (Regional Semifinal), 11-3 over No. 7 Haslett/Williamston, 21-14 over No. 5 Cranbrook-Kingswood, 8-7 over Division 1 No. 2 Birmingham Brother Rice, 18-9 over Division 1 No. 3 Clarkston, 12-5 over Division 1 No. 9 Brimingham United.
Players to watch: Nick Martin, jr. M; Jackson White, soph. G; Jack Bergmann, sr. A; David Pohl, sr. M (Statistics not submitted.).
Outlook: Country Day achieved the major accomplishment of becoming the first in-state team to defeat Brother Rice since the MHSAA began sponsoring lacrosse in 2005. And the Yellowjackets appear primed to finish with the one victory that arguably would be more significant from a statewide view. Martin, White, Bergmann and Pohl all earned all-state recognition last season, and White has been an absolute stopper in goal. Country Day has given up only 14 goals combined in four tournament games and gave up 10 or more only four times during the regular season.

PHOTO: Birmingham Brother Rice’s Jason Alessi will finish his career Saturday as one of the top scorers in MHSAA boys lacrosse history.