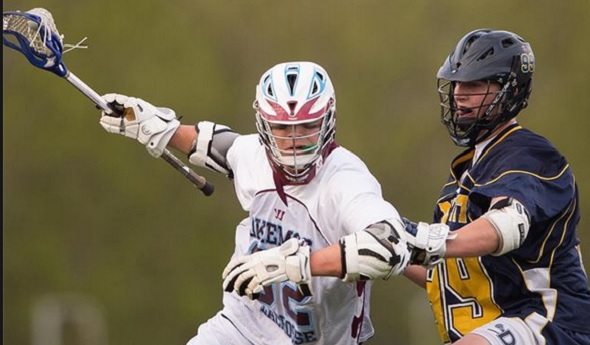 Three teams playing in Saturday’s MHSAA Boys Lacrosse Finals at Troy Athens are familiar with the setting – they played on the same field for the same prize only a year ago.

Birmingham Brother Rice has won all 10 Division 1 titles in MHSAA history, and Detroit Catholic Central was runner-up in 2014. Bloomfield Hills Cranbrook Kingswood is seeking its second Division 2 title in three seasons after finishing runner-up last spring – and faces an opponent, Okemos, that will enjoy competing on the season’s final day for the first time.

The Division 1 Final begins at 2 p.m., followed by the Division 2 Final at 4:30. Click for more information including all results from this season's tournament. Both finals also will be streamed live on MHSAA.TV, viewable with subscription, and broadcast on MHSAANetwork.com.

Here's a brief look at the four teams vying for titles (player statistics do not include Semifinals):

BIRMINGHAM BROTHER RICE
Record/rank: 18-4, No. 1 at end of regular-season
League finish: First in Detroit Catholic High School League A
Coach: Ajay Chawla, second season (37-8)
Championship history: 10 MHSAA championships (most recent 2014).
Best wins: 14-7 over No. 9 Grand Rapids Forest Hills Northern in the Semifinal, 14-3 (Regional Final) and 17-3 over No. 6 Birmingham United, 7-4 and 15-8 over No. 7 Detroit U-D Jesuit, 11-4 and 14-10 over No. 2 Detroit Country Day, 14-6 over No. 3 Detroit Catholic Central.
Players to watch: Ross Reason, jr. G (6.90 goals-against average); Brendon Kennedy, sr. A (29 goals, 12 assists); Morgan Macko, jr. A/M (56 goals, 46 assists); John Lockwood, sr. A (54 goals, 47 assists); Riley North, jr. A (31 goals, 11 assists).
Outlook: The Warriors have continued to dominate Michigan boys lacrosse, going undefeated in-state with the only losses. They fell to one of Indiana’s top teams (Culver Military Academy) three times and a Canadian power (Toronto Hill Academy) while also beating one of Ohio’s best in Upper Arlington and Indiana’s top-ranked team, Carmel. All seven all-staters from last season are gone, but more of the best from 2014 have continued to carry the program – Lockwood and Macko were among the team’s top scorers last season and combined for nine of the team’s 23 goals in last spring’s championship game win over DCC.

DETROIT CATHOLIC CENTRAL
Record/rank: 14-5, No. 3 at end of regular season
League finish: Second in Detroit Catholic High School League A
Coach: Dave Wilson, 10th season (131-62)
Championship history: Division 1 runner-up 2014, 2010, 2007 and 2006.
Best wins: 14-13 over No. 2 Detroit Country Day in the Semifinal, 14-13 over No. 4 Brighton, 13-6 (Regional Final), and 7-4 over No. 7 Detroit U-D Jesuit, 20-9 over No. 9 Grand Rapids Forest Hills Northern, 19-12 over No. 5 Troy, 11-8 over No. 10 Ann Arbor Skyline.
Players to watch: Zach Crawford, sr. A; Andrew Caris, jr. LSM; Alex Jarzembowski, jr. M; Rocco Mularoni, jr. A (Statistics not submitted.)
Outlook: DCC is back in the Final for the second straight season after edging Country Day, last season’s Division 2 champion, in the Semifinal. This team has a bit of a different look – there are only eight seniors, and only four start. In addition to wins listed above, the Shamrocks also were 3-1 against Division 2 teams that finished the regular season ranked among the top four, losing only to top-ranked Forest Hills Central (9-7 in DCC’s first game this season). They’re on a roll with eight straight wins – including six over ranked opponents – since falling to Brother Rice 14-6 in their only meeting this season.

BLOOMFIELD HILLS CRANBROOK KINGSWOOD
Record/rank: 13-9, No. 4 at end of regular season
League finish: Fourth in Detroit Catholic High School League A
Coach: Mat Wilson, fourth season (55-31)
Championship history: Division 2 champion 2013 and 2006, runner-up in 2014 and 2007.
Best wins: 8-7 (OT) over No. 1 Grand Rapids Forest Hills Central in the Semifinal, 11-5 over No. 6 Pontiac Notre Dame Prep, 13-12 over Division 1 No. 2 Detroit Country Day.
Players to watch: Johnny Wagner, sr. M; Bennett Faliski, sr. M; Peter Augier, sr. M; Michael Langdon, sr. D; Jack Blumberg, sr. D. (Statistics not submitted.).
Outlook: Cranbrook Kingswood is back in the Final for the third straight season and despite graduating a pair of standout offensive players after finishing runner-up last spring. Wagner is finishing a career that already has him entered in the MHSAA records listings three times, and he with the other four players mentioned above all earned all-state honors in 2014. The Cranes started 2-7 but faced both Division 1 finalists and top teams from Ohio; they are 11-2 since and have given up only 16 goals total over four tournament games.

OKEMOS
Record/rank: 17-2, No. 2 at end of regular season
League finish: First in Capital Area Activities Conference
Coach: Shawn Grady, 13th season (156-77)
Championship history: Has not played in an MHSAA Final.
Best wins: 14-10 (Semifinal) and 12-9 over No. 3 East Grand Rapids, 12-10 over Division 1 No. 4 Brighton.
Players to watch: Blake Grewal Turner, sr. A (60 goals, 21 assists); Cole Jamieson, sr. M (27 goals, 18 assists); Bennett Sherman, jr. A (56 goals, 31 assists); Cameron Stelljes, sr. G (5.20 goals-against average); Sam Horton, sr. D.
Outlook: The Chieftains have been building toward this first-time Finals appearance, improving their win total four straight seasons and with a group that went 15-2 in 2014 with five all-staters that are back this spring. Okemos’ only losses this season were to two of the best in Division 1 – by two goals to No. 9 Forest Hills Northern in the opener and then by only one goal to No. 3 Detroit Catholic Central in the regular-season finale. Those were two of only four opponents who scored more than seven goals on the Chieftains this season.

PHOTO: Okemos' Blake Grewal Turner works to get past a DeWitt defender during a victory this season. (Photo courtesy of Alan Holben Photography.)