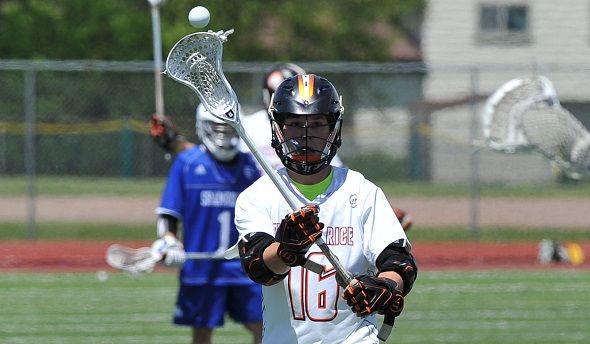 No. 1 will take on No. 2 in both MHSAA Boys Lacrosse Finals on Saturday at Howell’s Parker Middle School.

It just so happens that both championship games will pit opponents who already have faced each other twice this season with league titles on the line.

Brother Rice downed Detroit Catholic Central 11-5 and 14-7 in Detroit Catholic League A play, and they’ll face off once more in the Division 1 Final at 4:30 p.m. Starting the day at 2 p.m. in Division 2 will be Grand Rapids Forest Hills Central and East Grand Rapids, with the Rangers looking to add a third win to their 15-9 and 14-13 victories in Ottawa-Kent Conference Tier I play this spring.

Both Finals will be broadcast on MHSAA.tv, available with subscription, with audio available on MHSAANetwork.com. Click for more information, including all tournament results.

Below is a look at all four contenders, with player statistics through Regional Finals.

BIRMINGHAM BROTHER RICE
Record/rank: 19-2, No. 1 at end of regular-season
League finish: First in Detroit Catholic High School League A
Coach: Ajay Chawla, third season (57-10)
Championship history: 11 MHSAA championships (most recent 2015).
Best wins: 9-6 over No. 6 Clarkston in Regional Final, 16-3 over No. 9 Midland in Regional Semifinal, 11-5 and 14-7 over No. 2 Detroit Catholic Central, 8-3 over No. 3 Detroit Country Day, 13-9 over Division 2 No. 2 East Grand Rapids.
Players to watch: Morgan Macko, sr. A (70 goals, 55 assists); Riley North, sr. A (49 goals, 38 assists); Jack Kelly, jr. M (47 goals, 16 assists).
Outlook: Brother Rice has played through a couple closer games than perhaps usual this spring – but is again the heavy favorite as it seeks to continue its sweep of every Division 1 title since the tournament was started more than a decade ago. The only losses this spring were twice to Indiana powerhouse Culver Military Academy, and the Warriors took on and beat some of the best from Ohio and Illinois as well. Macko is finishing off one of the most productive runs in MHSAA lacrosse history and also starred the last two seasons.

DETROIT CATHOLIC CENTRAL
Record/rank: 17-4, No. 2 at end of regular season
League finish: Second in Detroit Catholic High School League A
Coach: Dave Wilson, 11th season (149-71)
Championship history: Division 1 runner-up five times (most recent 2015).
Best wins: 13-5 over No. 3 Detroit County Day in the Semifinal, 13-5 over No. 7 Brighton, 16-10 over Division 2 No. 2 East Grand Rapids, 17-10 over Division 2 No. 3 Okemos.
Players to watch:  Rocco Mularoni, sr. A; Justin Baker, sr. A; Brennan Kamish, jr. M (Statistics not submitted.)
Outlook: DCC will play in its third straight Final trying to break the hold of rival Brother Rice on Division 1. Seven seniors start for a team with plenty of big-game experience; midfielder Alex Jarzembowski is another veteran standout among many. Similar to Brother Rice, DCC also played strong programs from other states and Ontario. The Shamrocks have shown the ability to lock down top teams; they held opponents to fewer than 10 goals in all but six games and have given up only 11 goals total over four postseason games.

EAST GRAND RAPIDS
Record/rank: 15-5, No. 2 at end of regular season
League finish: Second in O-K Conference Tier 1
Coach: Rick DeBlasio, fourth season (first of second tenure; 48-13 overall)
Championship history: Three MHSAA titles (most recent 2009), three runner-up finishes.
Best wins: 16-15 (2OT) over No. 3 Okemos in the Semifinal, 9-3 and 9-3 (Regional Final) over No. 4 Ada Forest Hills Eastern, 8-6 over No. 5 Pontiac Notre Dame Prep, 6-4 and 9-7 over Division 1 No. 5 Rockford, 15-5 over Division 1 No. 3 Detroit Country Day, 16-5 over Division 1 No. 10 Ann Arbor Pioneer.
Players to watch: Hub Hejna, jr. A (67 goals, 30 assists); Matt Solberg, sr. A (43 goals, 49 assists); Ben Keller, jr. A (46 goals, 15 assists).
Outlook: East Grand Rapids will play in its first championship game since finishing runner-up in 2011, and has taken on plenty of strong teams to prepare. The losses came to Brother Rice, Detroit Catholic Central, twice to Forest Hills Central and to Okemos in the season opener – and the Pioneers avenged that loss Wednesday. Those four teams are the only ones to score more than seven goals on the Pioneers this season. DeBlasio formerly coached the team from 2002-04.

GRAND RAPIDS FOREST HILLS CENTRAL
Record/rank: 19-2, No. 1 at end of regular season
League finish: First in Ottawa-Kent Conference Tier 1
Coach: Jake Seiler, second season (36-5)
Championship history: Two MHSAA titles (most recent 2012), two runner-up finishes.
Best wins: 15-9 and 14-13 over No. 2 East Grand Rapids, 17-8 over No. 3 Okemos, 20-8 over Division 1 No. 5 Rockford.
Players to watch: Bryce Clay, soph. D (95 goals, 53 assists); Tanner Hallock, jr. A (51 goals, 34 assists); Max Kuiper, sr. A (38 goals, 28 assists).
Outlook: Second-year coach Seiler has Forest Hills Central back in a Final for the first time since finishing runner-up in 2013 and after having lost this season only to Country Day in double overtime and Culver. Although Clay is the most productive scorer, there’s lots of balance with six Rangers tallying at least 20 goals heading into the week – and plenty of help in goal as senior Kadin Schermers and freshman Jack Nolan have combined to give up six goals per game this spring.