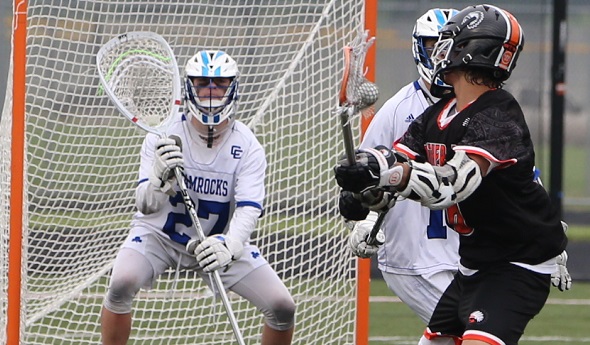 We entered last season’s Boys Lacrosse Finals with a familiar scenario – both championship games were rematches – and we finished the day with Detroit Catholic Central breaking new ground with its first Division 1 title.

With a Semifinal win earlier this week over reigning Division 2 champ East Grand Rapids, could Ada Forest Hills Eastern become the next to end the spring as a first-time champion?

That’s a possibility in Division 2 on Saturday as the Hawks will make their first Finals appearance as a stand-alone program. Meanwhile, Bloomfield Hills Brother Rice will be looking to take Division 1 back from the Shamrocks, and Grand Rapids Forest Hills Central stands in the way of FHE as it hopes to rise after two straight runner-up finishes.

The Division 1 game leads off this year’s series at 2 p.m. Saturday, followed by the Division 2 game at 4:30. Both Finals at Howell’s Parker Middle School will be broadcast on MHSAA.tv, available with subscription, with audio available on MHSAANetwork.com. Click for more information, including all tournament results.

Below is a look at all four contenders, with player statistics through Regional Finals unless noted.

DETROIT CATHOLIC CENTRAL
Record/rank: 19-3, No. 2 at end of regular season
League finish: Second in Detroit Catholic High School League
Coach: Dave Wilson, 14th season (203-82)
Championship history: Division 1 champion 2018, runner-up seven times.
Best wins: 14-13 (OT) over No. 6 Lake Orion in Semifinal, 12-3 over No. 8 Clarkston in Regional Final, 23-10 (Regional Semifinal) and 18-8 over No. 7 South Lyon, 17-9 over No. 5 Rockford, 22-6 over Division 2 No. 3 Ada Forest Hills Eastern, 12-3 over Division 2 No. 2 East Grand Rapids.
Players to watch: Joey Kamish, sr. A; Ryan Sullivan, jr. A; Justin Petouhoff, sr. LSM; Kyle Love, sr. M; Connor Beals, sr. M; Jakob Hemme, jr. G; Ryan Birney, sr. M. (Statistics not submitted.)
Outlook: Last season belonged to the Shamrocks, as they finally broke through to defeat Brother Rice both during the regular season and in the championship game. The Warriors won the first meeting this season by 11 but the second by only four goals, and DCC should have plenty of confidence for this final rematch. Kamish, Love and Beals all made the all-state first team last season, while Sullivan, Petouhoff, Hemme and Birney made the second team. The only other defeat this spring came in the regular-season finale to Division 2 top-ranked Grand Rapids Forest Hills Central, by three.

ADA FOREST HILLS EASTERN
Record/rank: 16-6, No. 3 at end of regular season
League finish: Third in O-K Conference Tier 1
Coach: Zack Grusell, first season (16-6)
Championship history: Division 1 runner-up 2011 and 2013 as part of Forest Hills Eastern/Northern.
Best wins: 9-6 over No. 2 East Grand Rapids in Semifinal, 15-5 over No. 4 Spring Lake, 16-7 over No. 9 Flint Powers Catholic, 9-8 over No. 5 Grand Rapids Forest Hills Northern.
Players to watch: Brandon Pham, sr. G (8.4 goals-against average, .500 save percentage); John Morgan, soph. A (69 goals, 34 assists); Sam Bowen, soph. A (43 goals, 28 assists); Kevin Sprague, soph. A (33 goals, 15 assists); Ethan Johns, soph. M (30 goals, 21 assists).
Outlook: Forest Hills Eastern avenged a one-goal regular-season loss to East Grand Rapids to earn a spot in the championship game, and the Hawks have to be excited about Saturday and the future given the relative youth of their leading scorers this spring. Tough losses midseason to Detroit Catholic Central, Rockford, FHC, Hartland and EGR over an eight-game span no doubt helped prepare Forest Hills Eastern for this run, and the Hawks have given up a combined 27 goals over their last seven games. Grusell was one of the state’s all-time leading scorers while starring for Portage Central until graduating in 2011, and he moved up from assistant this season after also spending a season as an assistant at Forest Hills Central.