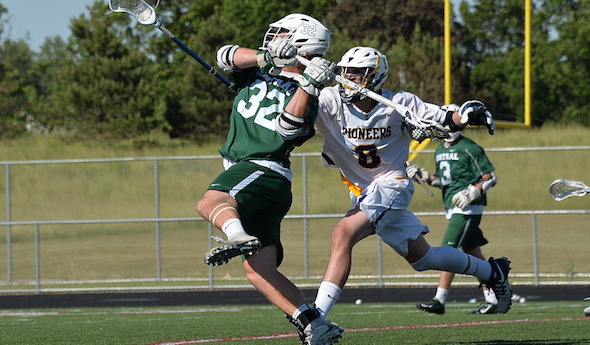 There’s little question which teams have been the best in Michigan boys lacrosse the last few seasons.

The Division 2 game leads off this year’s series at 2 p.m. Saturday, followed by the Division 1 game at 4:30. Both Finals at Howell’s Parker Middle School will be broadcast on MHSAA.tv, available with subscription, with audio available on MHSAANetwork.com. Click for more information, including all tournament results.

Below is a look at all four contenders, with player statistics through Regional Finals.

DETROIT CATHOLIC CENTRAL
Record/rank: 18-2, No. 1 at end of regular season
League finish: First in Detroit Catholic High School League A
Coach: Dave Wilson, 13th season (182-79)
Championship history: Division 1 runner-up seven times (most recent 2017).
Best wins: 10-9 and 11-8 over No. 4 Birmingham Brother Rice, 13-12 over No. 2 Hartland in Semifinal, 20-9 over No. 9 Rockford, 17-8 over No. 6 South Lyon Unified in Regional Final, 19-18 over Division 2 No. 1 Grand Rapids Forest Hills Central, 10-4 over Division 2 No. 2 East Grand Rapids.
Players to watch: Peter Thompson, sr. A; Joey Kamish, jr. A; Patrick Brandemihl, sr. M; Ethan Pattinson, sr. M. (Statistics not submitted.)
Outlook: DCC broke through against rival Brother Rice during the regular season and now will look to claim its first Division 1 championship in its fifth straight title game try against the Warriors. The Shamrocks have beaten most of the best in Michigan, with both losses to out-of-state opponents. Thompson was a repeat all-state first-teamer last season and Kamish made the second team. Like Brother Rice, only five opponents have scored double-digit goals on DCC this spring.

EAST GRAND RAPIDS
Record/rank: 17-4, No. 2 at end of regular season
League finish: Second in O-K Conference Tier 1
Coach: Rick DeBlasio, sixth season (91-30)
Championship history: Four MHSAA titles (most recent 2017), four runner-up finishes.
Best wins: 16-3 over No. 9 Grosse Pointe North in Semifinal, 16-2 (Regional Final) and 14-11 over No. 7 Ada Forest Hills Eastern, 15-3 over No. 6 Bloomfield Hills Cranbrook Kingswood, 14-5 over Division 2 No. 10 Orchard Lake St. Mary’s, 17-6 over No. 3 Vicksburg, 16-8 over Division 1 No. 5 Brighton, 10-3 over Division 1 No. 9 Rockford, 12-2 over Division 1 No. 8 Lake Orion.
Players to watch: Nick Milanowski, sr G (5.10 goals-against average), Eric Solberg, sr. A (63 goals, 11 assists); Chris Owens, sr. A (66 goals, 27 assists), Jay Stecco, jr. A (23 goals, 62 assists).
Outlook: After falling to Grand Rapids Forest Hills Central in the 2016 Final, East Grand Rapids won last year’s championship rematch 11-9 to claim its first title since 2009. The Pioneers fell to FHC in their meeting earlier this season and will be playing from a bit of an underdog role again – but with a two-time all-state first team goalie in Milanowski and plenty of scoring prowess. Seniors Jack DelVecchio (31 goals) and Connor Davis (22 goals) also are among nine players who had tallied double-digit goals this season heading into this week. Senior Drew Thomas was a first-team all-state defender last season.

GRAND RAPIDS FOREST HILLS CENTRAL
Record/rank: 18-1, No. 1 at end of regular season
League finish: First in Ottawa-Kent Conference Tier 1
Coach: Andy Shira, first season (18-1)
Championship history: Three MHSAA titles (most recent 2016), three runner-up finishes.
Best wins: 19-3 over No. 10 Orchard Lake St. Mary’s in Semifinal, 25-12 over No. 3 Vicksburg in Regional Final, 15-11 over No. 6 Bloomfield Hills Cranbrook Kingswood, 20-8 over No. 7 Ada Forest Hills Eastern, 14-7 over No. 2 East Grand Rapids, 16-4 and 19-7 over Division 1 No. 9 Rockford, 12-5 over Division 1 No. 4 Birmingham Brother Rice.
Players to watch: Bryce Clay, sr. A (83 goals, 52 assists); Tate Hallock, jr. A (57 goals, 34 assists); Tobey Hendricks, sr. A (51 goals, 21 assists); Jack Nolan, jr. G (8.00 goals-against average).
Outlook: Shira was the team’s second new coach in two seasons but has Forest Hills Central back in the championship game for the third straight. Clay is one of the state’s top players, a multiple-time all-state first-teamer, and will look to end his career with another high note. Senior defender Andrew Trapp and senior midfielder Patrick English made the all-state first and second teams, respectively, last season, although English (16 goals, 14 assists) had played in only 13 games entering the week and isn’t listed in the starting lineup. Junior Luke Majick added another 45 goals and 25 assists entering this week, and junior Logan Wedder is a top face-off specialist.