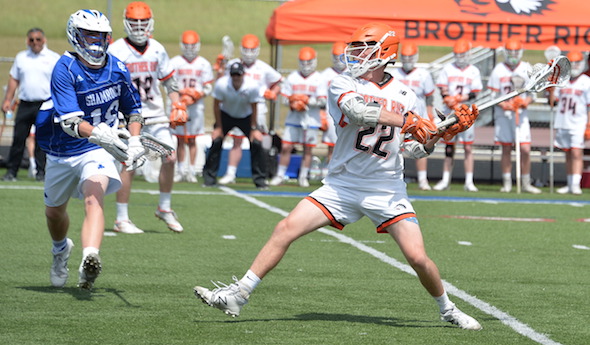 HOWELL – The chain remains intact for another year at Birmingham Brother Rice.

But adding a 13th straight Division 1 championship took a gallant effort over the final 14 minutes Saturday against an opponent that couldn’t be more familiar – or dangerous after a couple of close meetings earlier this spring.

Detroit Catholic Central too leads twice during the third quarter of the Division 1 Final at Howell’s Parker Middle School. But Brother Rice scored the equalizer with 1:01 to go in the third, and senior Cameron Gould netted the game-winner with 4:27 to play for an 8-7 win over the Detroit Catholic League rival Shamrocks, who finished runners-up for the fourth straight season.

“(Our) streak’s a huge deal. No one wants to break the chain, but at the same time I’m overwhelmed with emotion. I’m just very happy for my team and all of my brothers.”

Brother Rice has won every Division 1 title since boys and girls lacrosse became MHSAA-sponsored sports in 2005.

The Warriors (20-4) had beaten DCC by one and five goals in their previous matchups this season after downing the Shamrocks 10-8 in last season’s Final. This was the third time during Brother Rice’s run that it was pushed to within a goal in a championship game – Catholic League mate Detroit U-D Jesuit played the Warriors to 12-11 scores in both 2005 and 2009.

For obvious reasons, it’s become expected for Brother Rice to be playing on the last day of the season. But earlier this week it had to survive an 8-6 Semifinal against Rockford – and DCC was as poised as could be to end the streak.

The Shamrocks scored first, a little more than three minutes into the game on a Peter Thompson shot. Rice twice built two-goal leads but never broke further away. 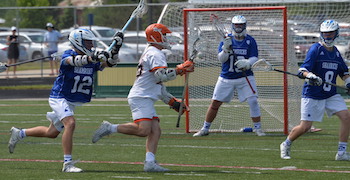 DCC scored the first three goals after halftime, with sophomore Joey Kamish delivering the first and senior Brennan Kamish the next two.

“We only have five seniors, but they work so hard,” DCC coach Dave Wilson said. “We were just trying to give them some reminders: Why are you here? What is your goal? And there was no fear. They wanted to win.”

Rice didn’t lose to an in-state opponent this season, but did go 5-4 again out-of-state competition. Seasoned seniors took over Saturday when it counted – Jack Kelly broke the DCC scoring run with a goal with 8:21 left in the third quarter and had the equalizer seven minutes later. Neither team scored during the fourth quarter until Gould netted his game winner.

“If you would’ve told me we were going to get held to eight I would’ve told you Dave (Wilson) would’ve won too,” Rice coach Ajay Chawla said. “Our defense came up big. We’ve been waiting for that game from them for a while. That’s why we go out and play tough teams, so when we get in these situations, we can bear down.

“We play tough opponents every day, whether in practice or games. That’s why we go out of town to play, so for games like this when it comes down to, barrels down to the last quarter or last goal, they’ve seen it before. They’re not afraid. They know how to handle it.”

Gould had a game-high four goals, and Kelly had three. Senior Daniel Reaume had Rice’s first goal and two assists.

DCC finished 15-6 this spring, with its only other in-state loss to East Grand Rapids.