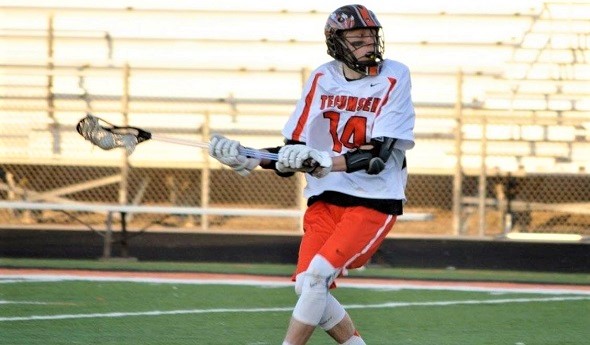 Dylan Day was in the fifth grade and playing Little League baseball in Tecumseh when he earned a spot on the district all-star team. Because he wasn’t a resident of Tecumseh, however, he wasn’t eligible to play for the squad.

“I was already starting to like lacrosse,” said Day. “In school, the varsity kids came down to our school and gave us a clinic on lacrosse. It looked like something I’d be interested in. I decided to give it a try.”

That lesson must have been a good one. It eventually led to a tremendous four-year run for the Tecumseh team and a phenomenal individual career for its leader.

Day is a multiple-sport athlete who completed his four-year career last week as Michigan’s second all-time leading scorer in lacrosse with nearly 500 career points. Last fall he rushed for 1,020 yards and passed for 1,037 more for the Indians’ football team, earning all-Southeastern Conference honors and receiving all-state mention from some postseason teams. He had more than 3,200 career offensive yards in football.

Despite hearing from Tecumseh’s football coaches that he might have a future playing college football, the 6-foot, 175-pound Day has long been dreaming of playing college lacrosse. He started playing the sport year-round before middle school. During the summer he would sometimes go from a full day of lacrosse to football workouts. He joined a traveling lacrosse team early on and has been playing across the country now for several years.

“I think the sport just fits my style,” he said. “I like to be active, run around and I like to hit. It’s the sport that I definitely have the most fun playing.”

Day was an instant success in lacrosse.

As a freshman, he scored 65 goals and had 27 assists, earning all-SEC and honorable mention all-state honors for the 14-3 Indians. After that season, he made the Under Armour All-American Midwest Uncommitted Team, a national traveling team that competed in a high-level tournament in Baltimore.

“He was a leader since the day he stepped on our practice field by challenging other teammates to elevate their game and speed,” Tecumseh lacrosse coach Steve Ayre said.

In 10th grade, he scored 83 goals and had 45 assists, with an 11-point game against Saline. As a junior, he surpassed the previous MHSAA record for goals in a season with 104 and had 59 assists. The Indians went 20-1 and won a Regional championship – and fittingly Day scored the game-winning goal in overtime.

“I didn’t care that I scored the goal as much as I cared about winning the championship,” he said. “It was a dogpile, everyone was jumping on. It was great.”

Another thing that made his junior season one to remember was he was able to share it with his younger brother Blake who also played on the team.

“We are brothers, so we argue, but it was pretty cool to play alongside of him, too,” he said.

This season, Day was as good as ever, scoring 52 goals and getting 52 assists. He finished his career with 304 goals, 183 assists and 417 ground balls.

“Dylan has always shown great athleticism, but his tempo of play and fearlessness set him aside from other athletes,” Ayre said.

Although he spent most of his career as an attack, he also played some midfield. “I think the coaches recognized I was good at scoring goals, so they put me in the attack spot,” he said.

In November, Day committed to the University of Indianapolis to play lacrosse. It’s a NCAA Division II program that is relatively new but has enjoyed a lot of success. In just their fourth season, the Greyhounds made the national semifinals and finished with a 16-3 record overall.

“My education is the most important thing,” Day said. “When I started looking and making visits, that’s the first thing I would ask about. I want to be a dentist or something in that field.”

As for playing the sport at the next level, Day is excited for the challenge.

“I’ve been playing lacrosse year-round now for several years,” he said. “I’m just a busy person in general. I think I’ll get used to playing in college.”

Ayre said he has no doubt Day will do what it takes.

“His dedication to academics and athletics has always impressed me,” Ayre said. “In today's world it is easy to get caught up in wanting to be a college athlete. Unfortunately, this usually means you lose sight of other things in your life, like academics, family, being a kid. Dylan played football for four years, worked at a job, completed a pre-dentistry course at our Tech Center, played on numerous travel and showcase lacrosse teams, and still managed to be a kid.”