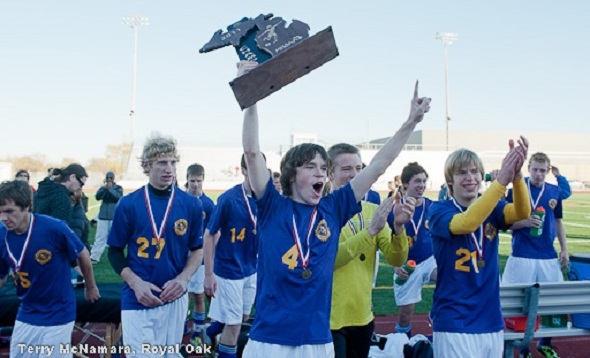 One team won an MHSAA title for the first time, another for the first in nearly two decades. And two more added to a significant pile of soccer championship trophies.

But the tie that binds all four of this season's Finals champions is location -- all four are suburban powers near the big city in the southeastern corner of the state.

Here's a rundown of Saturday's Finals:

Daniel Ovesea's goal from just inside the midfield stripe gave Canton its first MHSAA Boys Soccer title since a Class A trophy in 1994, with a 1-0 win over Grand Haven.

Ovesea's boot lofted high over a group of players in front of the goal behind the Buccaneers keeper Ethan Beswick.

Canton (24-1-2) and Grand Haven (18-2-3) played to a scoreless first half and seemed headed to overtime prior to Oversea's goal.

The Chiefs got stellar play from netminder Steven Murphy, who stopped 10 shots in the victory.

One school was guaranteed its first MHSAA Boys Soccer crown in the Division 2 Final, as both Auburn Hills Avondale and Spring Lake were making first appearances in the championship contest.

In the end, it was Avondale hoisting the trophy following a 2-1 win over the Lakers.

Avondale (18-5-2) got the equalizer early in the second half on Joe Davison's goal, and with just 1:53 to play, Skyler Russ nailed the clincher to give the Yellowjackets their first championship.

Spring Lake outshot Avondale, 18-11. Ben Richter got the win in goal for the Yellowjackets, while Harry Kriger stood tall in net for Spring Lake despite the loss.

The Yellow Jackets (20-4-1) fell behind just 5:28 into the contest, as Unity Christian's Jared Haverkamp found the net with an assist from Jake Love to put the Crusaders on top.

The lead was short-lived, however, as DCD's Dean Akeel evened things up with a marker at the 10:20 mark of the opening half.

Country Day got the game-winner from Oliver Harris 18:02 into the second half, and the defense held strong from there.

Unity Christian (24-1-1) outshot Country Day, 14-7, but it was not enough for the Crusaders to avoid their first loss of the season.

Country Day's Zachary Walker got the win in goal, while Unity's Zach Lier made six saves in the defeat.

Steven Fiema scored off an Evan Kraatz pass with 1:08 to play in the second overtime.