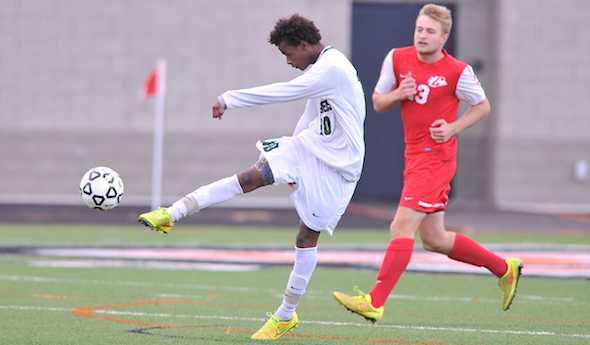 Click below for MHSAA.tv highlights from all four games, plus links to watch them in full.

Rangers First Goal - Grand Rapids Forest Hills Central scored once in each half in the Division 1 title game against Canton. Anthony Bowie gets the first tally with 17:25 left in the period.

Insurance Goal By Haji - With 1:30 left to play, Forest Hills Central gets its second goal, by Mohamed Haji.

VanNortwick Blast - Grand Rapids Forest Hills Northern scored first in the Division 2 title game with Mason. Evan VanNortwick's blast from way out found the top of the net with 15:13 left in the first half.

Bulldogs Tie It - Early in the second half, Mason's Christian Jordan heads in a corner kick to tied the score at 1-1.

Barrington Bangs It In - Things looked good for Forest Hills Northern when Travis Barrington headed in a cross with 2:32 left against Mason to give the Huskies a 2-1 lead.

Wild Goal Ties It Again - In a wild play in front of the net, Mason's Christian Jordan gets the goal with 38 seconds left in regulation to tie the game against Forest Hills Northern at 2-2.

Shefkiu Finishes It - On the final kick of the shootout, Mason's Lirim Shefkiu scores to give the Bulldogs the Division 2 title.

Selvius Stops - The big save in the shootout for Grand Rapids South Christian came when Sailors keeper Carter Selvius stopped a shot by Austin Brown of Williamston.

Soldiers Score First - Cole Russell gets the game's first goal with 10:01 left in the first half for Genesee Christian.


Knoll Goal - Kalamazoo Hackett ties the game 10 minutes into the second half when Will Knoll directs the ball in off a restart.

Amat Knocks Down The Door - Hackett tied the game at 2-2 with 7:11 left in regulation when James Amat knocked in Max Keenan's free kick.

Oliver’s Twist For The Win - Jesse Oliver got the game winner for Genesee Christian with about a minute left in the first overtime period.

PHOTO: Grand Rapids Forest Hills Central’s Mohamed Haji (10) had one of his team’s two goals in the Division 1 Final.