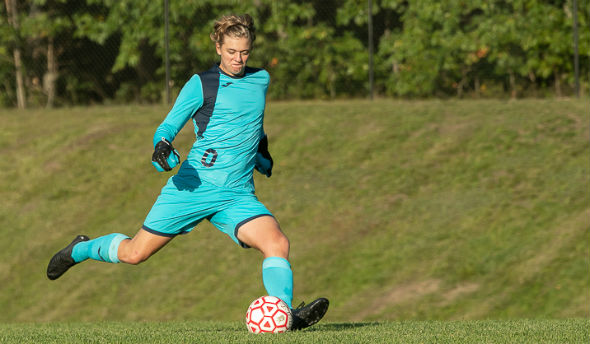 The Warriors’ senior keeper is the first to credit the defenders in front of him for Western Michigan Christian’s five shutouts in six Division 4 tournament games over the last three weeks. But he deserves ample credit as well, and came up with a number of key saves in last week’s 2-1 shootout win over top-ranked Grandville Calvin Christian to help his team to the Semifinals and earn the MHSAA “Performance of the Week.”

Fourth-ranked WMC will face No. 2 Grosse Pointe Woods University Liggett in Saturday’s Division 4 Final, and it can be argued no team has traveled a tougher road to the season’s final day. After blanking three District opponents, Goorman helped the Warriors to a 3-0 shutout of No. 3 North Muskegon in the Regional Semifinal. Next was Calvin, and Goorman made two saves during the second period of overtime and two more during the shootout, including on Calvin’s final shot to ice the win. He then had another shutout as WMC defeated No. 5 Dansville in Wednesday’s Semifinal, his 14th shutout this season, which took his goals-against average down to 0.57. Goorman joined the varsity for the District as a freshman and then was the part-time starter for the first part of his sophomore year before taking over when his partner in net was injured. He made the Division 4 all-state third team in 2018 and over his career has logged 45 shutouts, seventh-most in MHSAA history.

Goorman also has played baseball and basketball during his high school career, although he has decided to not play basketball this winter. But the court certainly has had a major impact on Jameson as an athlete, directly and indirectly – his grandfather Jim Goorman led WMC’s boys basketball varsity to 504 wins and five Class D titles from 1980-2012. There’s also a family background in soccer championships – Jameson’s dad Jamie was on the Warriors’ 1988 Class C-D title-winning team. Jameson is hoping to continue playing soccer at the collegiate level and also carries a grade-point average approaching 3.5. He plans to study either nursing or accounting.

Coach David Hulings said: “He knows the game and is able to interpret what he sees so quickly that he’s able to do what he needs to do. This year he had two really great saves, one against Reeths-Puffer that kept us in the game and allowed us to finish with a tie. The other was against Leland in the last five minutes of the game. He made a tremendous save and we won 1-0. … In our first game against Orchard View, they had seven breakaways and Jameson saved every one of them. Those were give-me goals, and he stopped them. I don’t know of a goalkeeper in my nearly three decades of coaching who is better 1-on-1 than Jamo.” (Comments first appeared in the Local Sports Journal.)

Performance Point: “I think since we got to the playoffs, we’ve been playing our best soccer,” Goorman said. “I haven’t had to make a ton of saves, other than the PKs, so most of the credit should go to my defense. (Opponents) haven’t had a ton of opportunities. Against Grandville Calvin Christian we went to a PK shootout. I’ve always been pretty good at PKs, so I just go in there thinking I’m going to save every single PK. For me, I was pretty confident going into it. … My sophomore and junior years, we lost in PKs both years in Regionals. We did not want to go out on PKs again, so we’ve been practicing that all year. I was getting pretty confident in our chances in that. My sophomore and junior year I felt really nervous, but going into the last shootout  I felt really confident; I didn’t feel that nervous . I was more excited than I was nervous.” 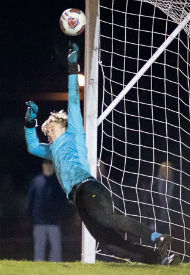 It’s the guys in front of me: “Brandon Fles, I think he’s one of the top two defenders in the state if not the best defender in the state, in my opinion. He’s been phenomenal since sophomore year. Him and Jake Betten, Isaiah Visker and Brandon Eenigenburg, the whole back line has played really well. I think most of the credit should go to them. There haven’t been too many teams that have challenged me a lot. There’s been some shots, but a lot of them have been from far out and not too hard to handle.”

Playoff path: “Calvin, North Muskegon and Dansville were all really quality teams. … With our team, it’s probably a little different than with any other team. We really like to stay loose, relaxed and just be ourselves for the games. And during practices we stay loose; we have fun. We’re just enjoying every minute of it. … It’s definitely not easy to have fun and stay loose and play hard and keep the intensity up, but I think that’s something we’ve just learned to do well going into the postseason. We’ve been trying to prepare ourselves all year for this, so I don’t think it’s been too hard to bring our best game every single game.”

Grandpa taught us: “It’s awesome being in a family with him. He’s really showed me how to win and how to have confidence, but also not (to) be overconfident and cocky. (He) showed me how to be humble, and I think I really appreciate that – and just how always to have good sportsmanship.”

Pitch play: “(Soccer has) probably come the most natural to me. I’ve had to work harder in baseball to get good at that – I’ve worked at that my whole life. I think soccer has come more naturally, and I’ve put more time and effort into that. I started playing club soccer my eighth grade year. It helped me so much with my feet, helped me get going, and then I started to really love soccer. I played it a lot more, so it became really fun for me, and I love my team. … I think after my sophomore year, I really just started to realize that I loved it more and I enjoyed playing it and I was getting better at it.”