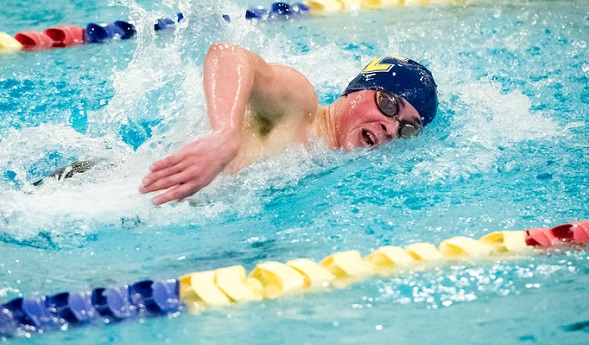 PORTAGE — Thursday night was an emotional one for the Portage Central boys swimming & diving team, and not only because it was Senior Night.

The Mustangs’ 114-69 win against St. Joseph was the last meet in the 44-year-old pool located at the middle school.

“They’re building a new pool at the high school,” Central coach Jim Schafer said. “It’s bittersweet after spending 33 years coaching in this pool; (there are) a lot of great memories.

“A lot of great student athletes have been part of the program. The old pools have served Portage very well, and I’m sure the new ones will serve just as well for the future of Portage Aquatics.”

The future is bright for the program – but so is the present.

The Mustangs are ranked No. 8 in the latest Lower Peninsula Division 2 state poll heading into the Southwest Michigan Athletic Conference meet Friday and Saturday at Battle Creek Lakeview.

The Mustangs have won 19 conference titles, including last year’s when they shared the crown with Kalamazoo Loy Norrix.

“There are a lot of good teams there,” Schafer said. “Mattawan gave us a really good meet last week. Norrix has a lot of good kids; so does St. Joe.

“Battle Creek Lakeview is always strong. It’s going to be a tight race between a lot of teams.”

The Mustangs, who take an 11-1 dual record into the meet, are no slouches in the pool.

After finishing eighth in LPD2 last year, they already have qualified four finalists from that team.

Owen Miller, the reigning LPD2 champ in the 200-yard freestyle, is just a junior and, while nostalgic for the pool where he set two varsity records, he is looking forward to the new one.

“I’m very excited for that,” he said. “We were shown the layout of the pool a while ago, but I forget what it looked like. I remember I liked it, but I’m not sure why.

“It’s going to be a much larger pool. More locker rooms.”

Miller also finished third in the 500 freestyle at the Finals last year and swam the first leg of the 400 freestyle relay with junior Sam Weber, senior Jacob Cole and Jack Rogers, who graduated last year. They placed eighth.

“Owen’s a quiet, hard-working guy,” said Schafer, who also teaches physical education, health and sports science at the high school. “As far as our team, he’s a great freestyler, but he can also swim other events as well.

“He’s one of our go-to guys that I can go to at any meet and say I need you to swim this. We’re fortunate enough that we have a handful of those kids. We have a pretty versatile lineup.”

Swimmers on the 10th-place 200 medley relay team were Rogers, who is now a freshman on the Wayne State University swim team, Weber, Cole and junior Jack Liu.

“Swimming is such a mental sport,” Cole said. “People don’t understand. Once you get up on the blocks, you don’t hear anything else. When he says ‘Take your mark,’ everyone has to be quiet in the building. There’s no noise.

“All that pressure that’s on you before you go in the race, it’s all gone for that moment before the buzzer’s released. It’s just like you and the water, and it feels like practice again.”

“I’ve coached several brothers, which is kinda nice because you know the families,” Schafer said.

With his brother holding team records in the 200 individual medley and 100 breaststroke, Jacob Cole has plenty of motivation.

“I don’t really excel in any of the major strokes, but I’m generally pretty good at every stroke,” Cole added. “My favorite event is the 400 IM which isn’t offered in high school, so I go in the 200 IM.”

Last year, Miller swam the first leg on the relay team, which was fine with him.

“I like it because I like to go out and try my best to get a lead, and then it takes some pressure off coming to the finish,” Miller said. “I like to cheer on my teammates as they come in.

“I enjoy them both (relays and individual competition). I think relays are more fun in that it’s the team and you’re working together, and it’s more of an accomplishment if you place high. Individuals, you have a little more self pride that you did this all yourself.”

Some teams do something special to bond during tournament time, but don’t count the Mustangs among them. 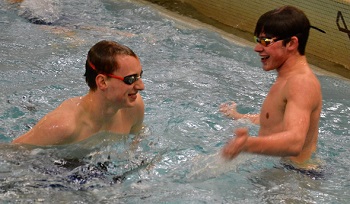 “We’re not shaving our head, that’s for sure,” Miller said, laughing. “We’re going to veto that one if the seniors bring it up.

“They talked about bleaching our hair, but we kinda talked them down to frosted tips style, but we’ll see if we actually go through with it.”

Schafer said there is a reason for Portage Central’s success.

“We’ve got some pretty hard-working kids and there are two good age-group programs in the area, which help feed into our program,” he said.

“We’re fortunate enough to work with kids who already have a good swimming background when they come in.”

Cole gives credit to his coach.

“Schaf’s the best,” he said. “He’s an amazing coach. Whenever I come to the high school season, I’m always excited because the team camaraderie is really great. It’s just a fun time, and I think Schaf brings that out in everybody. One of the three goals is building relationships, and that’s one thing we say.

“It’s great if you’re winning, but at the end of the day were you a good sport while you were doing it? Did you make friends during the season? Was it fun? What’s the point of a sport if you’re not having fun while you’re doing it?”

Schafer has just three other seniors on the team: Caleb Calnin, Ferris Ghazal and Ethan Kloosterman. 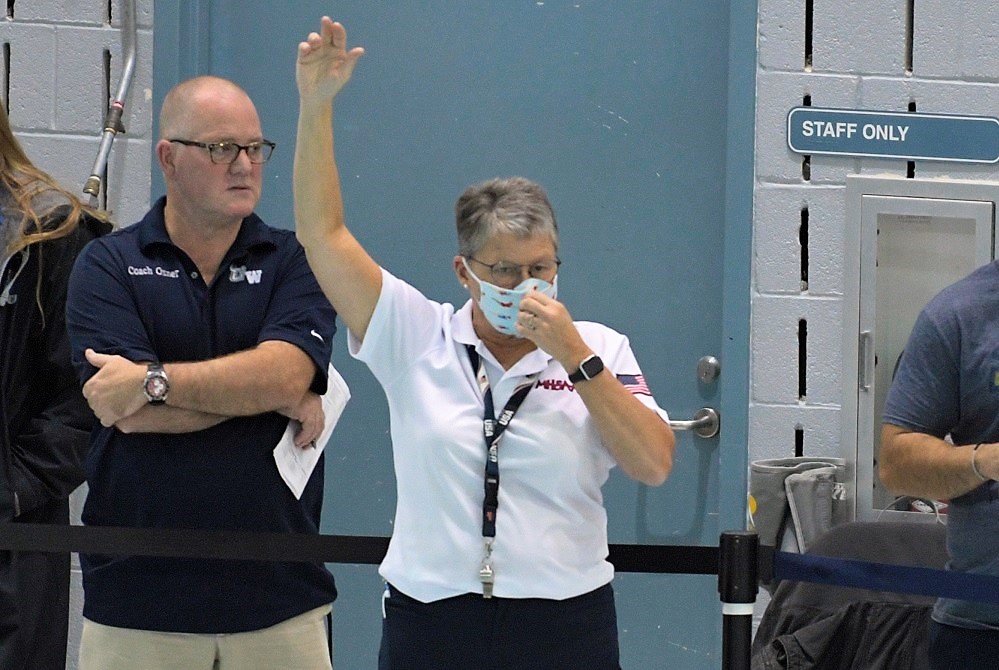 Below is this week's segment – Swim Turn Judges - Listen

Did you know the officials in swimming do more than make sure everyone dives in at the same time?

Each race has a turn judge who is positioned in line with the end wall. Their job is to make sure each swimmer is executing the proper stroke during his or her turn.

For example, if you are swimming the individual medley and are in the backstroke lap, you must turn while using the backstroke. You can’t go into the breaststroke while turning. If you do, the turn judge will signal to the referee by placing one hand overhead with an open palm, and then report it to the referee after the conclusion of the race.

The referee will then decide if the turn was legal or if the swimmer should be disqualified.