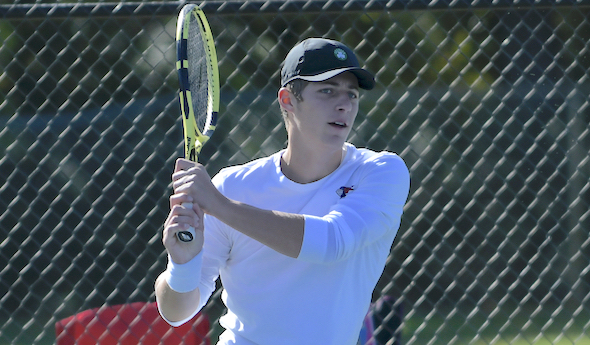 When he got to the court at Portland High School, Grosse Pointe Woods University Liggett senior William Cooksey discovered a realization: He was about to end his storied high school career at the same place he began it.

Even crazier was the high school career Cooksey ended up producing, as he made it four MHSAA Finals championships at No. 1 singles following a 6-0, 6-3 win over Andrew Solarewicz of Grand Rapids West Catholic in the Lower Peninsula Division 4 Final.

Cooksey became the first Lower Peninsula athlete to win four MHSAA Finals boys No. 1 singles titles since Hamtramck’s Francisco Castillo did so from 1957-60. Only five athletes total, both peninsulas combined, have won four championships at the top flight.

Ranked No. 8 in the nation for his age group, the 17-year-old Cooksey will play collegiately at University of Michigan.

“I was going in there expecting a physical match,” Cooksey said of Wednesday’s final. “I started off playing really clean and hitting big. He wasn’t used to that ball. Towards the middle of the second set, he kind of caught on to it. I kind of adjusted from there and put more balls in play.”

In an effort to prevent the spread of COVID-19, the MHSAA Boys Tennis Tournament this fall was adjusted from its usual flighted bracket format to a head-to-head team event. Liggett won the LP Division 4 team title Friday, and Wednesday the top eight No. 1 singles players in each division faced off for individual championships.

Okemos senior Josh Portnoy might not have been the top seed going into his Division 1 individual championship match against Gabe Brown of Troy Athens, but he did have two other things going for him.

One was that he had homecourt advantage with the Final taking place at Okemos.

“I really felt like it was an advantage,” said Portnoy, the No. 2 seed. “Having friends and teammates there cheering for me and practicing there gave me an advantage.”

The other edge was having some knowledge of Brown, who beat Portnoy earlier this season.

“Just play free and just play my game,” Portnoy said of his big adjustment for the rematch. “Definitely play more aggressive and be on the offense more.”

Portnoy certainly did that, earning a surprisingly dominant 6-1, 6-1 win over Brown to capture the championship.

It turned out to be a double title for Portnoy after Okemos won the Division 1 team title five days earlier.

Portnoy started off the day with a 6-0, 6-0 win over Angie Zhou of Ann Arbor Pioneer before beating Noah Roslin in their semifinal, 6-4, 6-4.

Mattawan senior Nathaniel Webster said he had never experienced pain like that before on a tennis court.

While up 2-1 in the second set of his championship match at Lansing Waverly against Nick Herdoiza of Walled Lake Central, Webster said he started experiencing a “whole-body cramp.”

Webster won the first set 6-4, but the cramp was so severe that he said he was forced to serve underhand the rest of the match.

“My teammates were there cheering, and I got a lot of adrenaline going,” Webster said. “I don’t know what happened.”

What eventually happened was that Webster overcame the pain and grinded his way to a second-straight No. 1 singles title, beating Herdoiza in the second set 6-2.

Seeded No. 1, Webster beat Alex Wootton of Portage Northern in a quarterfinal, 6-3, 6-0, and Sammy Yin of Grand Rapids Forest Hills Central in a semifinal, 6-3, 6-1, to earn the opportunity to repeat.

“This was a lot sweeter,” he said, comparing to 2019. “I was cramping in my last match a lot, so it was more hard-fought than last year. Just to go out my senior year with all my friends, it felt great to go out like this.”

Ann Arbor Greenhills junior Mert Oral repeated as No. 1 singles champion in this division in impressive fashion at Mason, beating Owen DeMuth of Bloomfield Hills Cranbrook Kingswood in the final, 6-0, 6-1.

“It feels good to be able to back up what I did last year, for sure,” he said.

“My serve was pretty good,” Oral said. “I was really consistent. I was able to use my forehand from the baseline and was really happy with the way I was able to compete and battle throughout my matches.”