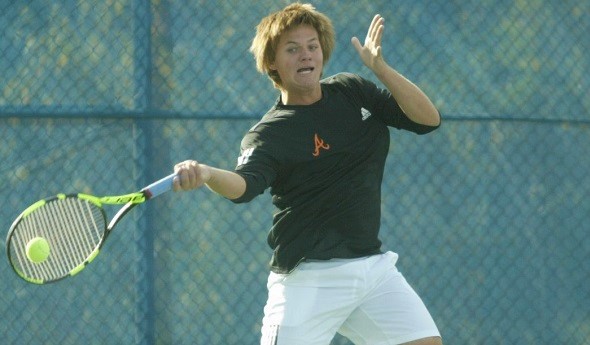 A longtime coach retires after 45 years building one of the state’s strongest tennis programs, even receiving national recognition for his work spreading love for the game – but he never won a championship at the highest level. His program is taken over by a pair of former players, one the longtime girls coach whose son fills the No. 1 singles flight and is among a number of second-generation players on the team.

At the beginning of the season, they write three goals on the dry-erase board in their team room – to win league, Regional and MHSAA Finals championships. They’re finally able to check off every single one, returning home from the season’s final tournament to a police escort after achieving that previously unattainable ultimate goal for the first time.

The Allegan boys tennis team is still celebrating its Lower Peninsula Division 4 championship won Oct. 18-19, a crowning achievement following the 45-year coaching career of Gary Ellis which concluded after the 2018 season. Former players Jen Aldrich and Seth Arthur took over as co-coaches this fall and – with a lineup of players brought up through the community’s tennis program – added the highest prize to Ellis’ legacy while creating their own.

“We had three goals … so every time we (accomplished one), we would bring them in the check it off the board – ‘Ok, step one is done. Now to step two,’” Allegan co-coach Jen Aldrich said. “I think everyone bought into ‘team’ this year. In previous years, we had a lot of individual successes. This year was different; we were going to win as a team. Nobody talked about individual flight championships. That was a huge key – everybody knew they were important, and everybody knew they had to get points at states.”

The MHSAA/Applebee’s “Team of the Month” actually tied for the LPD4 championship with Kalamazoo Hackett, after defeating Hackett 6-2 in match play earlier this season and winning the Regional title ahead of the second-place Irish on Oct. 10. (And of course, this is not to take anything away from Hackett’s fine Finals performance. The Irish earned the shared title – their first Finals championship in the sport since 2005 – by tying Allegan with 21 points at the Finals.)

The Tigers’ quest reached back generations. As reported by the Allegan News when Ellis retired, he had led the program to 30 league and 12 Regional titles, 32 MHSAA Finals appearances and 23 top-10 finishes at the year-end event.

Freshman Eli Festerling gave Allegan a boost at No. 4 singles with the program’s first Finals flight championship since 1990. Noah Festerling and Ben Groth also made the championship round, taking runner-up honors at No. 3 doubles. 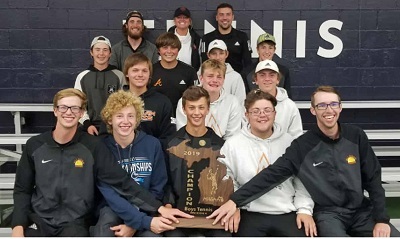 The Tigers also got at least one win at six flights and made semifinals at five – although the team entered with only four flights seeded (among the top four) to advance to the second-to-last round. Total, Allegan flights finished 16-7 at the Finals.

One of those semifinalists was No. 1 doubles pair Jack Nahikian and Korbin Sisson – after Nahikian had played No. 4 singles the year before. Vance Muenzer was a Regional runner-up at No. 3 singles this fall after making the jump from playing No. 4 doubles in 2018.

Tyler Aldrich – Jen’s son – was a Regional champ at No. 1 and won two Finals matches while entering unseeded. No. 2 singles Tim Lyon also won a match at the Finals, while Owen Clearwater and Walker Michaels at No. 2 doubles and Chase Williams and David Roark at No. 4 also made semifinals. Aldrich, Eli Festerling, Clearwater/Michaels, Noah Festerling/Groth and Williams/Roark were Regional champs to pace that team title victory.

“I think our strength is our depth. We were strong all the way through,” Jen Aldrich said.

“It’s extra special too for such a small town,” she added, “because Gary and I, we run the summer tennis program so most of these kids we’ve had in the program since they were 3 and 4 years old.”

Aldrich had played for Ellis’ girls program from 1988-91 before going on to play at Western Michigan University, and since coming home has led the girls tennis program for 16 years – her brother Tony Fales actually was Ellis’ assistant for the latter’s final 15 years. Arthur played for Ellis before graduating in 2010 and went on to play at St. Joseph’s College in Indiana.

Arthur kept players loose, especially during big events, providing a boost of fun when the team needed to keep things light. Aldrich was more the disciplinarian, stepping in to crack down when required. They were assisted by Jesse DeBoer, another former Allegan standout who graduated in 2012 and played at Spring Arbor.

“It’s awesome that we took over this year, but deep down we know this is because of Gary Ellis,” Aldrich said. “He built the program. He’s worked with these kids. He got them to this point. So we’ve been celebrating Gary this whole time, because we know it’s because of him and my brother … we just happened to be in the right place at the right time. This really truly was a championship because of Gary Ellis. … This is truly his program.”

And it’s a championship that brought pride to many who have played for Allegan over the years. Ellis’ teams had reached third place at the Finals multiple times, including in 2018.

If this year’s athletes didn’t understand what they accomplished in the moment, they have come to understand over the last month.

“I think probably their families as a whole (know) too,” Aldrich said. “Some of the parents of the players were in the program for Gary – they were players here once – and a lot of alumni (showed support) on our Facebook page and that sort of thing.