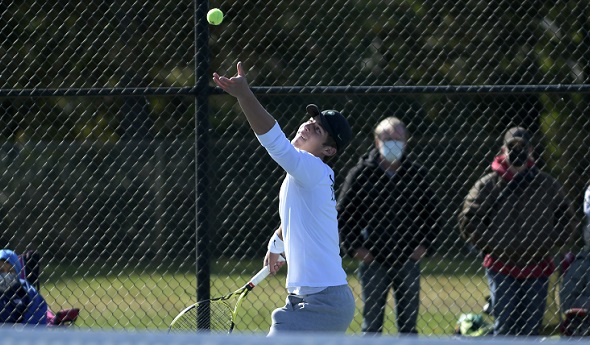 As many wins as William Cooksey piled up playing tennis for Grosse Pointe Woods University Liggett the past four years, there were probably more times he was asked why he was playing high school tennis in the first place.

One of the country’s top junior players, who is ranked No. 8 in the nation for his age group, the 17-year-old Cooksey also won the under-18 boys single title at the USTA National Indoor Championships in Kansas City last year.

That seems like a recipe for wanting to just train full-time for junior circuit play, but Cooksey stuck with playing high school tennis for a simple reason.

“I got a lot of good memories and experiences, but I think the main thing was team environment,” Cooksey said. “Becoming a leader and adopting that role model role. I just had a bunch of buddies on the team, and it was just a fun time.”

In addition to having fun with friends, Cooksey also ended up leaving a major legacy with his high school accomplishments.

At the MHSAA Division 4 Individual Final on Oct. 21 in Portland, Cooksey won his fourth straight No. 1 singles title, putting him in rare company.

Cooksey became the first player from the Lower Peninsula to win Finals titles at No. 1 singles in any division all four years of high school since Francisco Castillo of Hamtramck did so from 1957-60. Cooksey became the fifth player total in state history to accomplish the feat; Marquette's Alec Olivier (2016-19) was the only other athlete since Castillo to win four Finals championships at the top flight.

Cooksey arrived at Liggett as a scrawny, 5-foot-6 kid who had enough skill to still win the Division 4 championship at No. 1 singles as a freshman in 2017.

He leaves high school as a chiseled, 6-foot-3 phenom who has developed his game further and will embark on a collegiate career at the University of Michigan.

Another mark Cooksey said that high school tennis left on him was that it helped launch him into an elite national junior player.

“I was always short, weak and I wasn’t doing so well in the younger divisions like the 12s and the 14s,” Cooksey said. “I was kind of struggling with it a little bit and getting down on myself. But after winning states my freshman year, I got a bunch of confidence. I started growing and started putting on some muscle. That’s when I started loving playing the game.”

Liggett head coach Mark Sobieralski said Cooksey enjoyed being around high school friends and teammates so much that he would often spend just as much time at practices trying to coach them up as he did playing himself.

“He loved the kids and to be with them,” Sobieralski said. “When he came to practice, he would take like four kids and work with them and then practice on his own. All of his friends, he got to play with and he had fun. That’s the greatest thing about him.”

But now that high school is over, Cooksey is moving at the high speed of his serve toward his future.

It was somewhat of a lost summer on the junior circuit not only because of COVID-19, but also because he was battling a wrist injury.

But Cooksey, who said he likes to pattern his game from professionals Jannik Sinner of Italy and Dennis Shapovalov of Canada, said he is much healthier and raring to get back into junior tournament action.

“My wrist is definitely feeling better,” Cooksey said. “I’m hoping they are going to have national indoors so I can defend my title there. That would be cool.”

No matter what the future holds for Cooksey, he will leave high school tennis knowing he forever made his place in the record books.

“When you see him, he looks like a 5-star,” Sobieralski said.

It’s certainly been hard to argue.

PHOTOS: (Top) University Liggett’s William Cooksey serves during his No. 1 singles match at the MHSAA Team Tennis Finals earlier this month. (Middle) Top to bottom: Liggett playing for No. 1 championships as a sophomore, junior and senior. (Click to see more from HighSchoolSportsScene.com.)