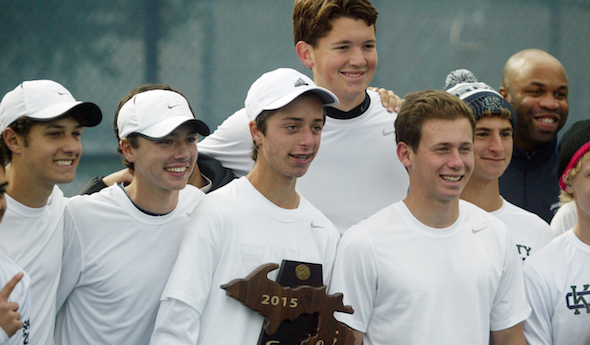 By Greg Buckner
Special for Second Half

On Saturday, the Cranes turned the tables, winning the MHSAA Final with 38 points to leave the Yellowjackets settling for second with 30 at Hope College.

“I think for our seniors, it’s fantastic,” Cranbrook Kingswood coach Jeff Etterbeek said. “These guys have watched that trophy presentation for four years now, and for them to have this day was really exciting. Country Day obviously has a great program — they’re one of the top five programs in the state in all divisions.

“We had to beat them three times (this season) and we did. I’m really proud of this team, especially the leadership that our seniors came out with today.”

The win was especially sweet after Country Day beat Cranbrook Kingswood by seven points for the LP Division 3 championship last year — and the Cranes did it in dominating fashion Saturday by winning all but two flight finals on the day.

“It’s so surreal watching Country Day come away with the title the last four years and being able to take it away for my senior year; it’s an unbelievable feeling,” Cranbrook Kingswood senior Marc Sable said. “Just this group of guys — they’re my best friends. Just the depth with our team and (Country Day) is crazy.

“When you have a team like us where from No. 1 singles to No. 4 doubles that has some great team chemistry, that lets us have such great results and we were able to come away with the title.”

Cranbrook Kingswood held on to its two-point first-day lead on the Yellowjackets thanks to a clean sweep of all four doubles flights.

Nolan Trepeck and Matthew Gerard started it off with a 6-1, 6-0 win over Country Day’s Damian Runkle and Adam Junn at the first flight. Chase Ghesquiere and Steven Meng beat Country Day’s Ryan Murakawa and Ricky Wamicke 6-0, 6-0 at No. 2; Brandon Kerr and Colin Petzold topped Country Day’s Kavon Rahmani and Joe Zhang 6-4, 6-4 at No. 3; and Andrew Du and Jacob Yellen claimed a 6-1, 6-0 victory over Holland Christian’s Brady Brower and Ethan Mouw in the No. 4 flight final.

“But I thought the edge would be in the doubles for us, and that certainly proved to be true.”

The hometown Maroons placed fourth with 17 points, trailing third-place East Grand Rapids by three, but JP Avila won the No. 1 singles title with a 6-1, 6-4 victory over Sable for the first MHSAA title at the top singles flight in program history.

“It’s pretty crazy to think that it’s my first year playing here at Holland Christian and being able to do this is not only cool for myself, but for the school and the team as well,” said Avila, who was born in Holland but lived in China and Mexico before returning. “It’s an honor to be able to do it and play for Holland Christian. … I think it will be a couple days until I realize what I’ve done.” 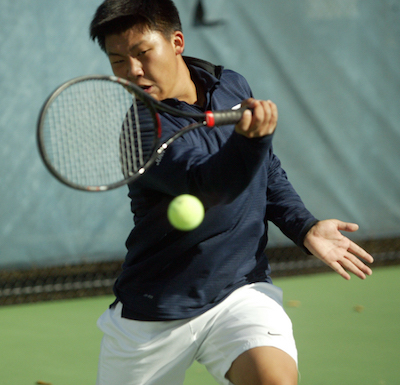 The Yellowjackets’ Michael Khaghany beat Cranbrook Kingswood’s Michael Bian 6-1, 6-3 for the No. 3 singles flight title — and it was only fitting that the two state powers that have combined to win the last seven Division 3 titles would square off in six of the flight championships Saturday.

“Cranbrook was better and we gave effort. We played better today, but they played better than we did,” Country Day coach Tom Ellis said. “You’re probably looking at the two best teams in the state. We’ve played the Novis, the Cranbrooks and played Division 1 teams. You’re looking at Cranbrook as the best team in the state — and we’re not far behind.”