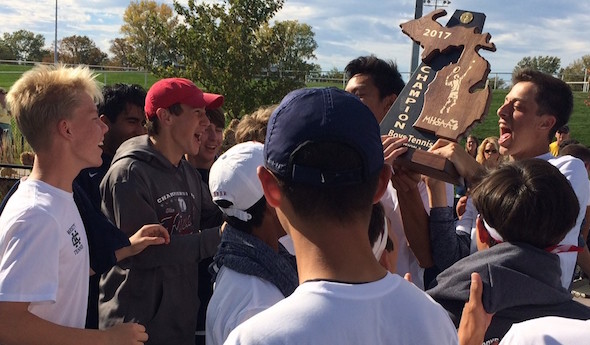 Cranbrook Kingswood did have a twist to this year’s winning plot. The Cranes were led by a new coach this season in Steve Herdoiza. Although in his first season with the boys, Herdoiza is no stranger to the tennis program as he has coached the Cranbrook Kingswood girls team the past four years.

“With this group of guys, I thought that winning a third state title was very attainable,” Herdoiza said. “I knew a lot of these guys. As a new coach it’s important that everyone buys into the system, and all these boys did. This is a team with a lot of depth and a lot of talent. When you put those two things together, and everyone is working hard, you can accomplish big things.”

Cranbrook Kingswood’s depth and talent proved key. Two years ago, the Cranes won the title by eight points over second-place Country Day, and last year the margin was just one point over the Yellowjackets. At the Regional leading up to this year’s Finals, Cranbrook Kingswood defeated Country Day, ranked second in LPD3, by two points.

Strong play in the singles flights proved a key for Cranbrook Kingswood. At No. 1 singles, senior Benji Jacobson came into the tournament as the top seed. A two-time individual Finals champion and last year’s winner at No. 1 singles, Jacobson claimed this year’s title with a 6-2, 6-4 win against Jack Dausman of Coopersville. Dausman was a familiar foe for Jacobson, as Jacobson defeated Dausman in last year’s semifinals.

After a slow start to the season, Jacobson came into the tournament on a roll the last few weeks.

“At the beginning of the year I struggled a little bit,” Jacobson said. “I changed my grip and it took a while to get used to it. A few weeks ago, it started to click and it made a big difference this year.”

Jacobson, who will continue his tennis career at Tulane University next season, capped his career at Cranbrook Kingswood as a three-time individual and three-time team Finals champion. While the individual titles are nice, the team title is by far more special for Jacobson.

“Winning the team title easily feels better,” Jacobson said. “For the past three months we’ve been on the court grinding and having fun off the court. These guys are like my brothers. We are more like a family, and winning three in a row is unbelievable.”

“Words can’t describe this feeling,” Bosch said. “Being here last year helped me because I was not as nervous as last year. Winning the team title is great, especially for our seniors. This was their last matches in high school, and to send them out with a third title is amazing.”

Cranbrook Kingswood also came away with the championship at No. 3 singles. Justin Luo, the top seed, turned in an efficient performance in the finals with a 6-0, 6-0 win against second-seed Kody Harrington of Allegan.

“The first set was real close,” Wang said. “It went to a tie breaker and I won it 9-7, so it definitely was real close. It feels good to end my senior year with a win.” 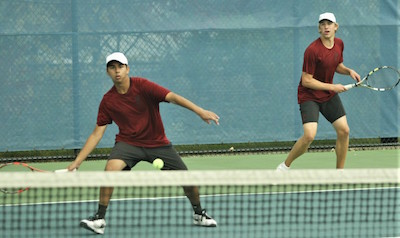 In doubles play, Cranbrook Kingswood won at No. 2 as the top-seeded duo of Joseph Croskey and Nikhil Deenadayalu defeated Connor Smith and Kole Butterer of East Grand Rapids 6-4, 6-2.

“To win the last match of your high school career is pretty awesome,” Lee said.

One of the bigger surprises of the tournament came at No. 1 doubles, where Forest Hills Eastern’s Nick Hakken and Anish Premkumar, the three seed, defeated Cranbrook Kingswood top seeds Andrew Du and Jacob Yellen 4-6, 7-6 (4), 6-2.

“To finally win it is amazing,” Premkumar said. “It’s always been a goal of ours to win state.”

The win also helped Eastern finish in third place, the best finish the Hawks have ever posted at the Finals.

“We were just really focused,” Hakken said. “We had Country Day in the semifinals so we had to be real focused for that match also. To help the team to its best finish ever is really cool.”