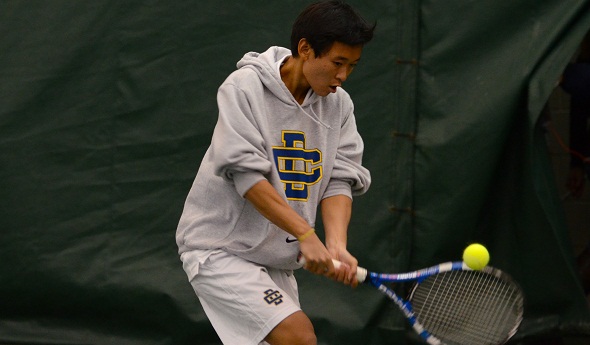 By Alan Babbitt
Special to Second Half

One of the nation's top young players helped Detroit Country Day repeat as MHSAA Lower Peninsula Division 3 champion on Saturday, winning his No. 1 singles flight to lead a Yellow Jackets domination of the two-day tournament.

"I've never experienced that before. It's great being on a team," said Fliegner, who was homeschooled before enrolling at Country Day this fall. "I played a ton of USTA tournaments. Nothing I've ever done feels (this) good mainly because of the team atmosphere. Everyone's watching.

"To come through like that, we did great. We've got a ton of good players on one team." 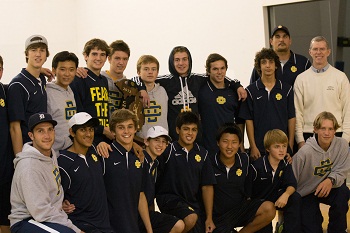 Fliegner, a junior, wrapped up his first high school season by winning his title match 7-5, 6-4 over sixth-seeded Jan Krakora of Plainwell. He entered this fall ranked No. 19 in the United States Tennis Association Under-16 rankings.

Krakora, the lowest seed in the tournament to reach a title match, is an exchange student from the Czech Republic. He enjoyed his first experience with American tennis.

"It is really nice," Krakora said. "I didn't how big the state tournament is. It's really, really good guys. I'm happy I'm runner-up. I think I really played well in the finals. This is a really good experienced for me."

St. Joseph's Kenny Garstecki spoiled Country Day's bid for a perfect tournament by rallying in the No. 4 singles final for a 1-6, 6-3, 6-3 win over top-seeded Max Shanbron.

"It means a lot to us," Garstecki said of finishing second. "We would like to win, but at least they didn't sweep."

The third-seeded Garstecki avenged a 6-3, 6-4 loss to Shanbron earlier this season. Garstecki also won a three-setter during the semifinals.

"It feels good, a huge sense of accomplishment," Garstecki said. "I played him in my third match. I thought I could turn that match around, and that's why I did. I improved my ability to push him back, to keep him from being aggressive."

The Yellow Jackets held their top seed in every other flight.

Country Day coach Josh Molino was pleased with how his team handled the tournament moving indoors to Riverview Athletic Center and a 1 p.m. start on Saturday. It moved from Holland Christian High School because of wet playing conditions.

"It's late in the season now. Weather is a big factor," Molino said. "When we got here today, the guys were sitting around a little bit, but with any sport, you've got to be ready to roll with the punches. We understand we're here for one reason - to play tennis - whether it's inside, outside or underground

"We feel if we work hard enough, we can match up pretty well with anybody."

At No. 2 singles, Country Day's seeded Sven Kranz won his flight with a 6-1, 6-3 decision over St. Joseph's Thomas Bellio in the championship match. Kranz, the 2011 state runner-up at No. 1 singles, completed an undefeated season.

At No. 3 singles, Country Day's Rishi Patel repeated as champ in the flight by defeating Cranbrook-Kingswood's Will Dube 6-1, 6-0 in the final.

"Our goal at the beginning of the year was to get better each match. We had a lot of guys come through," Molino said. "I was really proud of Max. It was a tough loss - a lot of pressure on him - but he had a great season. The only thing I ask for is to fight for every point, and he did.