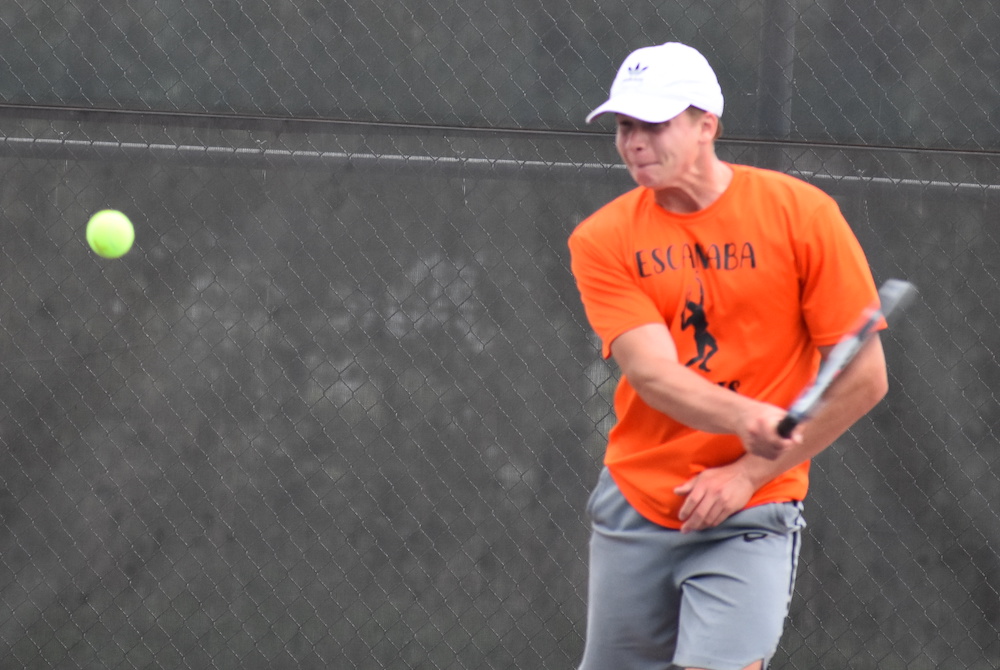 Maybe all it needed was some heavy rain to end that title drought.

The Eskymos battled through two lengthy weather delays to win their first U.P. Finals title since 2007. Escanaba’s win also ended Negaunee’s three-season tenure as champion as the Miners finished with 13 points, six behind the Eskymos.

Escanaba took three of the four doubles finals (Nos. 1, 2 and 3) and Nathan Howes took home the championship at No. 3 singles to lift the team to victory.

“It’s been 2007 since we’ve won this, and that’s a long time,” Escanaba head coach Tom Penegor said. “I’m just proud of these guys. They worked hard. Our two biggest goals throughout the year were to have fun and to get better. 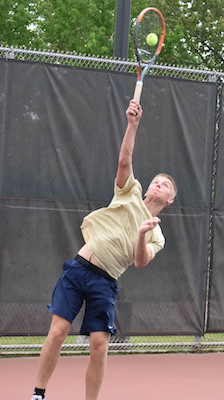 “Normally in past years, Negaunee was always the team to beat. We’d play them early in the year and we’d be somewhat close to them, but by the end of the year, they’d widen the gap. This year, we actually closed the gap. It’s a great accomplishment for these guys because Negaunee, that’s a program that we try to get close to and this year, we did and passed them. So I’m very proud of that. Plus, we only have four seniors, so hopefully we can come back and do some damage again next year. That’s something to shoot for.”

Negaunee got title wins from Will Luke at No. 1 singles and Luke Syrjala at No. 2, while also getting the victory at No. 4 doubles to keep pace with the Eskymos. However, those just weren’t enough to overtake them.

Even though Negaunee’s reign at the top came to an end, Miners head coach Kyle Saari was proud of how his team of newcomers performed.

“If you look at it, we entered this year, we had 10 new kids in the varsity lineup and this is kind of a big unknown,” he said. “When you end up entering the UPs, it’s kind of seeing and kind of trying to predict how they will respond on this day. That includes how do they respond to a 1 or 2 seed, how do they respond if they have a first-round match. And I think kind of as a whole, what it turned into for us today, it was just pretty much a learning experience, how to handle that down time.

“If you kind of look at the day as a whole, Escanaba had a terrific day; hats off to them. They responded and they had a really strong showing at 3 singles today, at 4 singles. With them being able to get through the finals into those flights, that really kind of set the table for them to be successful later in the day.”

Menominee finished third with 10 points and won the last match of the day as Danny Birch defeated Escanaba’s Connor Smale in a three-set thriller (6-4, 2-6, 6-2) at No. 4 singles. Marquette took fourth with five points, followed by Gladstone with two and Kingsford with one.

PHOTOS: Escanaba’s Nathan Howes returns a serve during his No. 3 singles match Wednesday in Negaunee. He went on to win the match and the flight. (Middle) The Miners’ Will Luke serves during a No. 1 singles match. He finished the season undefeated. (Photos by Ryan Stieg.)