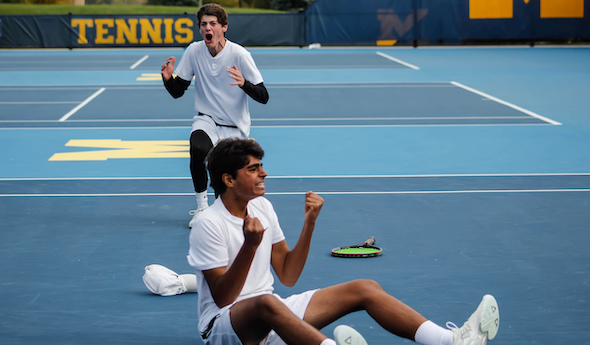 On Saturday, he wanted to experience that achievement for himself.

The Grand Rapids Forest Hills Northern junior and his doubles partner, Justin Lee, finished off a barn-burner of a tie-breaker, defeating Detroit U-D Jesuit’s Charlie Young and John Dahmer, 6-2, 7-6 (6), in the No. 2 doubles championship match, helping seal not only a flight title for Rynbrandt himself, but clinching the school’s first team Finals title since 1998.

“Knowing that (our win) clinched the team title makes it all that much sweeter,” Rynbrandt said. “The team hasn’t won a title in about 20 years and two of my older brothers had won state titles, so it’s something I’ve always wanted to do.”

What made it even more special is that Rynbrandt’s older brothers – Quentin and Aidan – both won their titles at No. 2 doubles as well. Oh, and to top it off, Saturday’s Lower Peninsula Division 2 Finals were played at the University of Michigan.

The Huskies’ 1998 title came when they competed in Division 3.

“It feels good that we could go out and win it,” said longtime Northern head coach Dave Sukup, who also was the head coach of that 1998 team. “We’ve come close a lot of times, some seconds and thirds and fourths. It feels good to fight back. Earlier this year we were (ranked) fourth or fifth, but we’ve come back and worked for this.”

The Huskies finished with 28 team points and had seven of eight flights reach Saturday’s semifinals, with four making it to the championship round. Along with Rynbrandt and Lee, two other doubles teams won titles for the Huskies. The No. 1 team of Nav Dalmia and Jeff Consolla defeated Jesuit’s Kagan Shetterly and Theodore Yaldoo, 6-3, 6-4, in their championship final. And Northern’s Jack Sparhawk and Ty Ulchman defeated Jesuit’s Teodore Melnyczuk and Nathan Comerford in the No. 3 doubles championship match, 6-4, 7-5. 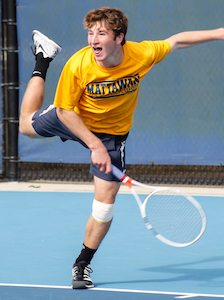 Jesuit, which along with Birmingham Seaholm shared the lead with Northern after the first day, sent all four of its doubles teams into Saturday’s finals. But the Cubs came up empty from there, finishing with 25 team points – good for second overall.

“They definitely were the favorite (coming in), but we had every opportunity to take it from them,” Jesuit head coach Jim Slaughter said. “They were the ones who had to play tense, and we could have come in and snatched it. But it didn’t happen today. We didn’t do the things that we normally do. We didn’t play our game. That happens.”

At No. 1 singles, Mattawan’s Nathaniel Webster defeated Berkley junior Adnan Alousi in the final, 6-1, 6-2. It was redemption for Webster, who lost in last year’s championship match.

“I wanted to win a state championship so bad,” said Webster, who did not drop a set and lost just seven games over his four matches on the weekend. “My team, we were so excited to compete at the state championships. I’m glad I could win this for myself and for them.”

Birmingham Groves finished third overall thanks to a pair of individual championships Saturday. Senior Brett Kovan defeated Northern’s Owen Goodrich in three sets in the No. 4 singles final, 6-2, 5-7, 6-3. The No. 1 seed entered the tournament with just two losses and entered the match against Goodrich having lost just a single game over his previous three matches.

The Falcons were also the top seed at No. 4 doubles, where the team of Will Hess and Will Kostello breezed to a 6-2, 6-1 victory over Jesuit’s Jake Kuredjian and Alex Mackillop in their final.

The final two individual flight championships were both won by Midland Dow – which finished fifth overall with 19 team points. Freshman Colson Wells – the second seed – defeated top-seeded Nolan Kovan of Groves, 6-3, 6-2, in the championship match at No. 2 singles. And senior Saketh Kamaraju needed three sets to defeat Portage Northern’s Graham Holley, 7-6, 6-7 (4), 6-2, in the No. 3 singles final.

The team title was the third overall for Sukup and his program, and it may not take 20 years to get to number four. The Huskies are young. They graduate just three starters and should return all four of their singles players in 2020.

“We’re really young,” Sukup said. “We’ll have all of our singles back and a good chunk of our doubles, so we’re excited about that.” 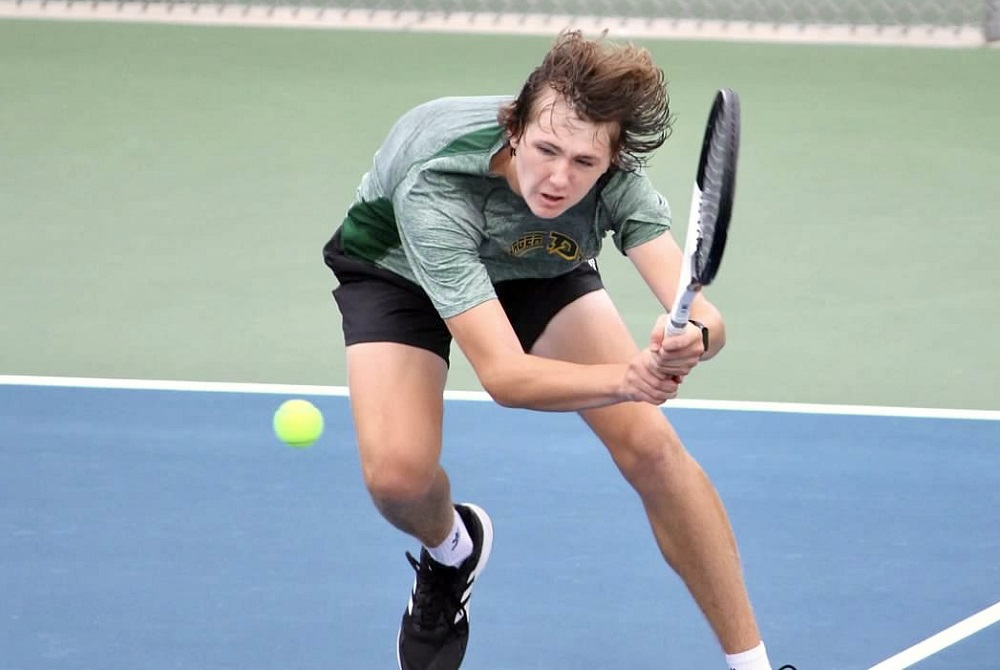