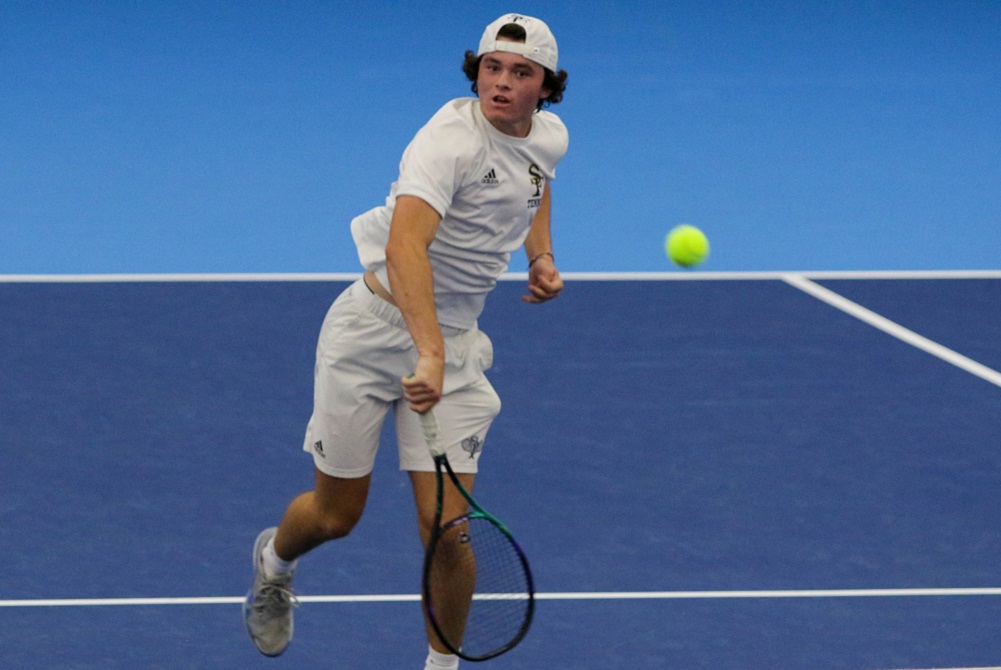 The favorites are often familiar at the Lower Peninsula Boys Tennis Finals. But last season showed us there’s plenty of room for new achievements – and with more possibilities this weekend.

Troy in Division 1 and Traverse City St. Francis in Division 4 were first-time champions last fall, and Northville and Big Rapids are among candidates hoping to make similar history as play begins Thursday in Division 4 and Friday in the other three brackets. All championship matches will be played Saturday.

See below for a look at several contenders, and check out the MHSAA Website for brackets and more (Final rounds will be played at sites listed first below):

Troy was first with 30 points, Bloomfield Hills second with 26 and Northville third with 23 last season, and they figure to dominate the top of the standings again in some order. Bloomfield Hills is seeking its first championship since winning back-to-back in 2017 and 2018, while Northville is playing for its first top-two finish.

Bloomfield Hills: The Black Hawks enter this weekend with four top-seeded flights, three second-seeded flights and a fourth seed. Senior Daniel Stojanov is seeded first at No. 2 singles and the reigning champion at that flight, while junior Aaron Rose is the second seed at No. 3 singles after winning No. 4 last year. Freshman Connor Shaya is the top seed at No. 4 singles, with seniors Drew Davis and Toni Vasile top-seeded at No. 3 doubles and junior Kierth Lingam and sophomore Dominic Pascarella top-seeded at No. 4. Pascarella won the No. 4 flight last season with a different partner.

Troy: The Colts’ repeat pursuit will be keyed by seven seeded flights, including the favorites at No. 1 and No. 2 doubles – seniors Srihari Ananthalwan and Rushil Kagithala, and freshman Derrick Kim and junior Nish Palepu, respectively. Ananthalwan was part of the No. 2 champion last season, and two singles players are returning Finals runners-up – junior Derek Blackwell, who played No. 2 in 2021 and is seeded eighth at No. 1; and Haresh Anand, who played No. 4 last season and moved to No. 2 this fall.

Northville: Sachiv Kumar was a headliner last season jumping from the fifth seed to the No. 1 singles championship, and he’s seeded second at that flight this time. All eight Mustangs flights are seeded, including two more in the second slots – sophomore Josh Kim at No. 4 singles, and senior Varun Varre and sophomore Brian Zhang at No. 4 doubles.

Clayton Anderson, Rochester junior: Another incredible story from last season, the reigning No. 1 singles runner-up made his run to the championship match while unseeded. This fall he is 22-0, with an early-season win over Kumar.

Birmingham Groves last fall ended Forest Hills Northern’s two-year reign atop this division, edging the Huskies by a point 27-26 while Dow tied for third with 20. Groves is ranked No. 6 heading into this weekend, while Dow is seeking its first championship since 2016. Dow and Forest Hills Northern both are undefeated, but tied in an Aug. 27 match. FHN’s other tie came against No. 4 Mattawan. Forest Hills Central is seeking its first championship since winning back-to-back in 2014 and 2015, and its losses are once to FHN, twice to Dow and once to No. 5 Birmingham Seaholm.

Forest Hills Northern: Seven flights are seeded, and all seven are seeded fourth or higher with two singles and three doubles pairs on the second seed lines. Senior Anderson Halland was part of the No. 2 doubles champion last season and is teaming up with junior Aidan Beyer for the fourth seed at No. 1. Senior Kyle Wang is back after finishing runner-up last year at No. 3 doubles, and he’s seeded second at No. 2 this weekend with junior Sam Deroos.

Forest Hills Central: No. 1 singles senior Sammy Yin is the top seed at the top flight, with six more flights seeded between third and fifth in their respective brackets. Yin made the semifinals last season, also as the top seed, and enters the weekend 32-3 with two wins over King this fall.

Nolen Kovan, Birmingham Groves senior: The reigning No. 1 singles runner-up upset Yin last year to reach the championship match and is back as the fourth seed. He’s 17-7 but with five losses to LPD1 contenders and the two LPD2 defeats to Yin and King, those two both coming Aug. 27. He defeated Stafford last week in their lone meeting of the season.

No team other than the three mentioned above has finished among the top two in this division since 2013, and no one else has won the Division 3 title outside of those three since the first fall LP boys tennis season in 2007. Cranbrook has won the last two team championships and six of the last seven, with Greenhills claiming the 2019 title. The Cranes won last season with 32 points, five more than Country Day and seven more than the third-place Gryphons. Greenhills defeated Country Day by six points to win last week’s Regional.

Ann Arbor Greenhills: For the first time since 2018, three-time No. 1 singles champion Mert Oral isn’t topping the lineup. But senior Chakor Rajendra has taken over and earned the top seed coming off the No. 3 singles title last season and having won the No. 4 championship when he was a freshman. Total, the Gryphons are seeded first at seven flights. Senior Rishi Verma is the reigning champion at No. 2 singles and the top seed at that flight as he seeks his third title after also winning No. 3 in 2019, while sophomore Kabir Rajendra is the top seed at No. 3 singles after finishing runner-up at No. 4 last fall. Greenhills didn’t make a doubles final in 2021, but is seeded to sweep with senior Mustafa Zirapury and junior Alex Ye at No. 1, senior Ismael Metwally and junior Lucas Nor at No. 2, seniors Arjun Prabhakar and Dylan Carvette at No. 3 and junior Charles Branch and freshman Ajay Purohit at No. 4.

Detroit Country Day: All eight flights are seeded, with freshman Luke Zhang leading the way as the top seed at No. 4 singles and senior Clay Hartje the second seed at No. 3. Hartje was part of the No. 3 doubles champion in 2019 and the No. 2 doubles runner-up last fall.

Michael Mascarin, St. Clair senior: The No. 3 singles runner-up as a freshman, Mascarin played No. 1 doubles last season (reaching the semifinals) and is the third seed at No. 1 singles this weekend. He’s 24-5 with two losses to DeMuth and a third to Chakor Rajendra.

Landon Coates, Stevensville Lakeshore senior: The fourth seed at No. 1 singles is 20-1, his only loss coming in August. He also was in the No. 1 bracket last season, but unseeded.

Traverse City St. Francis emerged from years of contention to win its first championship last fall, and should be in the mix for a repeat although 2021 runner-up University Liggett is the favorite to add to its most recent title won in 2020. St. Francis scored 34 points last season to win by seven. Big Rapids is seeking its first top-two Finals finish and should make a nice jump from last year’s tie for seventh.

University Liggett: The Knights will attempt to reclaim the championship on the strength of seeds at every flight, with two top seeds and four second seeds. Junior Sebastian Courtright was last season’s runner-up at No. 1 singles, with senior George Anusbigian runner-up at No. 2 and senior Gerry Sherer runner-up at No. 3; they are the second seeds this weekend at Nos. 1, 3 and 2, respectively. Senior Steve Wheatley and freshman Griffin Marchal are the top seed at No. 1 doubles, and senior Ryan King and freshman Niko Cooksey are top-seeded at No. 2.

Traverse City St. Francis: Four top seeds and plenty of championship experience should have the Gladiators contending deep into Saturday. Junior Tristan Bonanni is the reigning No. 2 singles champion and seeded third at No. 1, while sophomore Owen Jackson is seeded first at No. 2 singles after winning No. 3 last year and junior Chris Bobrowski is top-seeded at No. 3 coming off a runner-up finish at No. 4. Seniors Charlie King and Derek Berta are the top seeds at No. 1 doubles after winning the No. 3 title last fall, and sophomores Eli Schmude and Max King are the top seeds at No. 2.

Simon Caldwell, Grand Rapids West Catholic freshman: West Catholic graduated last season’s No. 1 singles champion and could have the next, as Caldwell enters his first Finals as the top seed at that flight. He’s 26-0 with half those wins by 6-0, 6-0 scores.

Daniel Pero, Brooklyn Columbia Central junior: The fourth seed at No. 1 singles made the semifinals at that flight last season as the fifth seed. He’s 13-0 and has lost five points total and none since mid-August.