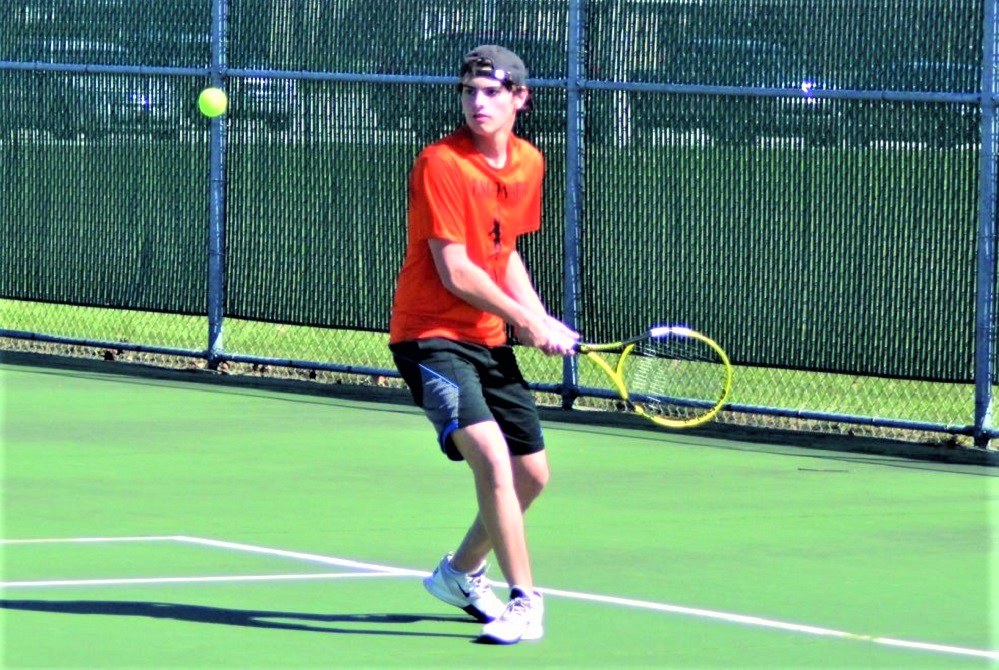 The Eskymos, fresh from earning their first Great Northern Conference title since 2003, will try to change that at today’s U.P. Division 1 Finals at Negaunee.

“We have a very nice opportunity ahead of us,” said fifth-year coach Tom Penegor. “We just went through a tough GNC meet (May 27 at Marquette). We’re hoping that will give us an edge in the U.P. Finals. I think we have some momentum.”

Standing in the way is five-time reigning champ Negaunee.

“They’ll be tough, and Marquette has good singles players,” said Penegor. “The other schools also have some good players. There’s pressure out there, and everybody responds to that differently. The game is just as much mental as physical. The scoring system is different from the GNC. You need every single point.”

“It felt great to win the GNC,” said Dlugas, who among latest improvements to his game has made the transition from a two-handed to a one-handed backhand shot. “We hadn’t won the GNC since I was born. Four of us have played for two years, and the rest of the guys are first-year players. We’re a fresh team, and that’s why this is so important for us. We have a lot of No. 1 seeds and we’re definitely improving, which gives us a pretty good feeling going into the Finals. I think we’re ready to go.”

Also part of today’s lineup are senior Ryan Moreau and junior Viktor Pospisil, an exchange student from Mladá Boleslov in the Czech Republic, who together are 10-2 at No. 1 doubles. 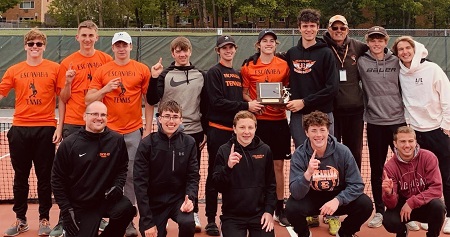 “I wasn’t supposed to play tennis, but I started playing with the guys at first, then decided to join the team,” said Popisil. “I had been playing in my hometown in Europe and appreciate having the opportunity to play here. I didn’t think we’d be this good at the beginning of the season, but everything kind of progressed as the season went on. We’ve been coming together as a team.”

Moreau said he truly enjoys playing with his partner.

“Viktor’s a great player, and we’ve become great friends,” he added. “All the players from the other schools come up and talk to him.

“I’m real excited about the Finals. Negaunee has a great program. We’re coming in as kind of an underdog. We definitely have to play our game and take the title away from them. If we do that, we should take it.”

“This experience has been awesome,” said Williams. “I learned a lot about tennis and made a lot of new friends. This is actually my first high school sport. Our first match (this season) against Menominee was exciting. I didn’t know how it was going to go, but I thought we performed beyond expectations.

“Negaunee as a great team, and West Iron County is very good. I thank God for giving me the strength to play at a high level and Coach, my teammates and parents for all their encouragement and support. Winning the GNC gave us a boost going into the Finals.”

Joining them in the doubles lineup are seniors Tanner McDonald and Jordan Nance (13-1) at No. 3 and senior Brayden Roberts and junior Joe Hubert at No. 4.

Should the Eskymos prevail today, it would mark the first time they’d have won the GNC and U.P. Finals in the same year since 1999.

“We had four practices before the U.P. Finals,” said Penegor. “After the GNC meet, we asked the guys if they wanted to practice over the weekend and they decided they wanted to do that.

“Our team has worked hard, and our assistant coaches (Chris Ogren and Alan Adams) have been a tremendous asset to our team this year.”

Tennis is a self-supporting program at Escanaba, and Penegor said one of the reasons he took over after retiring from the city was out of love for the sport.

“We appreciate the support of our sponsors, and the parents have driven us to some of the meets,” said Penegor. “They’ve also been big supporters of our team.

“We started with four seniors. It’s nice to have a mixture of younger kids with our seniors. This is definitely the best mix we’ve had in my five years as coach. We stress to the kids the importance of having fun, making improvements and working on their game.”