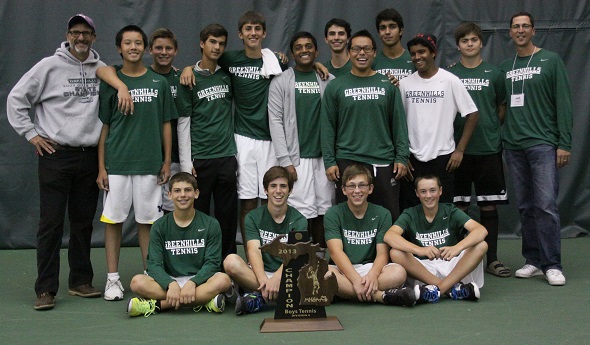 By Greg Tunnicliff
Special to Second Half

GRAND BLANC – Growing up in a family known for basketball, Teddy Oosterbaan decided to break from tradition and become a server – of tennis balls.

“I just try to do the best that I can,” Teddy Oosterbaan said. “(Tennis) is exciting and our team making states was cool.”

While the youngest Oosterbaan isn’t sure if he will suit up for Hackett on the hardcourt, he already has left his mark on the tennis courts.

Saturday, he was rarely challenged en route to posting a 6-0, 6-0 victory over Cal Willa of Grand Rapids West Catholic in the Lower Peninsula Division 4 No. 2 singles championship match at Genesys Athletic Club in Grand Blanc.

“I was in a pretty good rhythm the whole year,” said the 6-foot-4 Oosterbaan, who ended 24-1. “I felt I was getting better the whole season.”

Top-ranked Ann Arbor Greenhills continued its dominance in the team competition, capturing five of the eight fights en route to earning its sixth straight team championship and seventh in the last eight seasons.

The Gryphons finished with 33 points in the 24-team field, nine more than runner-up West Catholic (24).

“It’s a new group of guys each year; it’s a new challenge each year,” Greenhills coach Eric Gajar said. “They were well prepared. All the stuff we asked them to do, they brought together this weekend. They delivered at crunch time.”

At No. 1 singles, Lansing Catholic junior Matt Heeder overcame a slow start to post a 6-4, 6-3 victory over West Catholic’s Nicholas Solarewicz in the championship match.

Heeder fell behind 3-0 in the opening set before winning six of the next seven games. He was never seriously threatened after that en route to capturing his first Finals championship.

“After getting down 3-0, I started staying down on the ball,” Heeder said. “I was a little nervous the first couple of games, but coach settled me down and I got into a groove. I tried not to over think. I just did what I was capable of doing.” 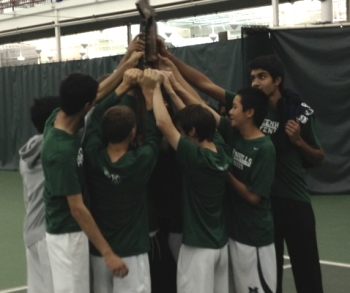 Pacing Greenhills was its No. 4 singles player, sophomore Gage Feldeisen, who captured his second championship and first at singles. Feldeisen, who was seeded second, won all four of his matches in straight sets, including a 6-3, 6-2 triumph over top-seeded A.J. Samdal of Grand Rapids South Christian in the final.

“Being the No. 2 seed, you don’t have any pressure to win,” said Feldeisen, who won at No. 4 doubles last year. “You can go out and just play the best you can. I hit my forehand a lot, tried to stay consistent.”

Greenhills captured all four double flights, led by its No. 1 team of senior Adhi Rajaprabhakaran and freshman Sam Talsma. The second-seeded tandem upset top-seeded Alex Lemire and Mike Nowicki of West Catholic, 6-1, 7-5, in the championship match.

“We were expecting a lot from ourselves from the beginning,” Talsma said. “We knew we had what it took to win the title. We never thought about anything else during the match.”

It is the third doubles championship for Rajaprabhakaran, who won at No. 3 in 2011 and No. 2 last year.

“It’s all I could ask for,” Rajaprabhakaran said. “I never lost in Division 4, and I wanted to keep that streak going. Along with our team winning, which is more important, I couldn’t be happier.”

“I never expected to get here the first year, upset the No. 1 seed,” Akervall said. “We had to stay strong the whole time. I’m just ecstatic.”

It is Sykes third Finals title, having won at No. 4 doubles the previous two seasons.

“I’m shaking right now,” Sykes said. “It took a lot of work in the offseason and during the season, trying to keep up with the competition. (Winning a third straight championship) is a good way to go out.”

The Gryphons’ freshman No. 3 doubles tandem of Andy Xie and Matt Chatas entered the tournament as the top seed and showed the field why, winning all four of their matches in straight sets.

“We just had to stay loose and not get down if we lost a game,” Xie said. “After a couple of games, we just got into our zone.”

The duo rolled through their first three matches, yielding no more than four games in a set. In the championship match, they held off second-seeded Jack Ninivaggi and Alex Dow of Liggett, 7-6 (7-4), 6-2.

“For the first day, we just had to get through,” Chatas said. “The second day, we had to play hard and make sure not to give (opponents) anything.”

Junior David Groden and sophomore Brandon Johnson joined Greenhills’ team this fall, and they got their careers off to fast start by winning the No. 4 doubles championship.

The twosome, which was seeded No. 2, upset top-seeded Jackson Benning and Davey Sekhon of Liggett, 4-6, 7-5, 6-4, in the championship match.

“We realized we were playing for the title,” Groden said of his and Johnson’s performance in the third set. “We wanted it, and we did it.”

Rounding out the individual winners was Hackett freshman Henry Hedeman, who won at No. 3 singles. Hedeman, who was seeded No. 1, captured all four his matches in straight sets, yielding no more than one game in a set.

He beat third-seeded Nick Link of West Catholic, 6-1, 6-1, in the championship match.

“It was pretty nerve-racking; you don’t want to have a big upset happen,” Hedeman said. “I had to play smart. I had to focus on the tournament.”