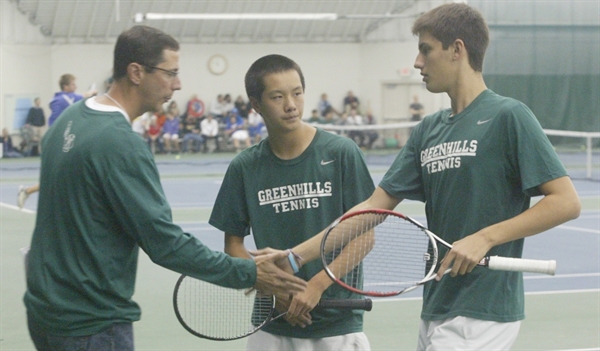 By Butch Harmon
Special to Second Half

And for Greenhills coach Eric Gajar, title number seven was just as exciting as the previous six.

“It’s a different group of guys and a different feeling every year,” Gajar said. “We’ve had a lot of pressure on us all year, and we take everybody’s best shot. We may have taken some of the drama out of it by clinching the title on Friday, but it was still exciting to win the state title.

“This never gets old. It’s always fun to win it.”

Greenhills clinched Friday as it saw all four of its doubles pairs qualify for Saturday’s play and three singles flights earn trips to the semifinals. The Gryphons then captured three doubles championships along with a pair of singles titles to finish with 33 points. Grosse Pointe Woods University Liggett placed second with 22, while Traverse City St. Francis rounded out the top three with 21 points.

“Some of the guys struggled earlier this season, but they kept working and persevered,” Gajar said. “It just took a while for everything to sort itself out.”

Setting the table for Greenhills was its doubles teams.

At No. 1 doubles, junior Brandon Johnson and sophomore Sam Talsma captured a title with a 6-2, 6-1 win against David Niewoonder and Dean VanElderen of Kalamazoo Christian. Johnson and Talsma were on winning doubles teams last season as Talsma also played No. 1 and Johnson was at No. 4.

“It’s the same feeling you have of winning but at a different level,” Johnson said. “It feels real good to win it at one doubles this year.”

Repeating at No. 1 was particularly special for the senior Talsma.

“It’s pretty nice to go out with another title,” Talsma said. “I had a new partner this year in Brandon. It was a nice season getting to know him, and winning the state title again feels great.”

A pair of sophomores hooked up for Greenhills to win No. 2 doubles. Andy Xie and Isak Akervall captured a 6-1, 6-0 victory against Alex Dow and Dave Sekhon of University Liggett.

“We’re real happy with the outcome,” Akervall said. “We had a pretty tough match in the semifinals yesterday. We had some nerves early, but then we settled down.”

“You don’t want to be the team that breaks the streak,” Xie said. “The streak is like the elephant in the room.”

Rounding out the doubles titles for Greenhills was the No. 4 team of freshman Zach Wu and senior David Groden, who faced a familiar foe in the final. Wu and Groden had split a pair of matches with Jackson Richmond and Ryan Navin of Traverse City St. Francis earlier this season.

Wu and Groden won the season series and the flight as they claimed a 6-3, 6-1 victory this time.

“Our whole season we have been working to this point,” Wu said. “We were really focused today and playing the way we were supposed to.”

The lone doubles title not won by the Gryphons featured a thrilling match at No. 3 that went three sets and featured the surprise squad of the tournament.

Grand Rapids Catholic Central’s No. 3 pair of junior Josh Sullivan and sophomore John Jakubowski came into the tournament seeded fifth. On Friday, Sullivan and Jakubowski defeated the No. 1 seed from University Liggett in the semifinal. They followed that up Saturday with a gritty 6-3, 4-6, 6-4 win against Matt Chatas and Nick Wu of Greenhills, who entered the tournament seeded second.

“Tennis is such an up-and-down sport,” Jakubowski said. “There are so many highs and lows, I’m just so glad we ended it on a high.”

“We were just hoping to play our best and maybe make it to the semifinals,” Sullivan added. “This is just a great feeling. This is crazy.” 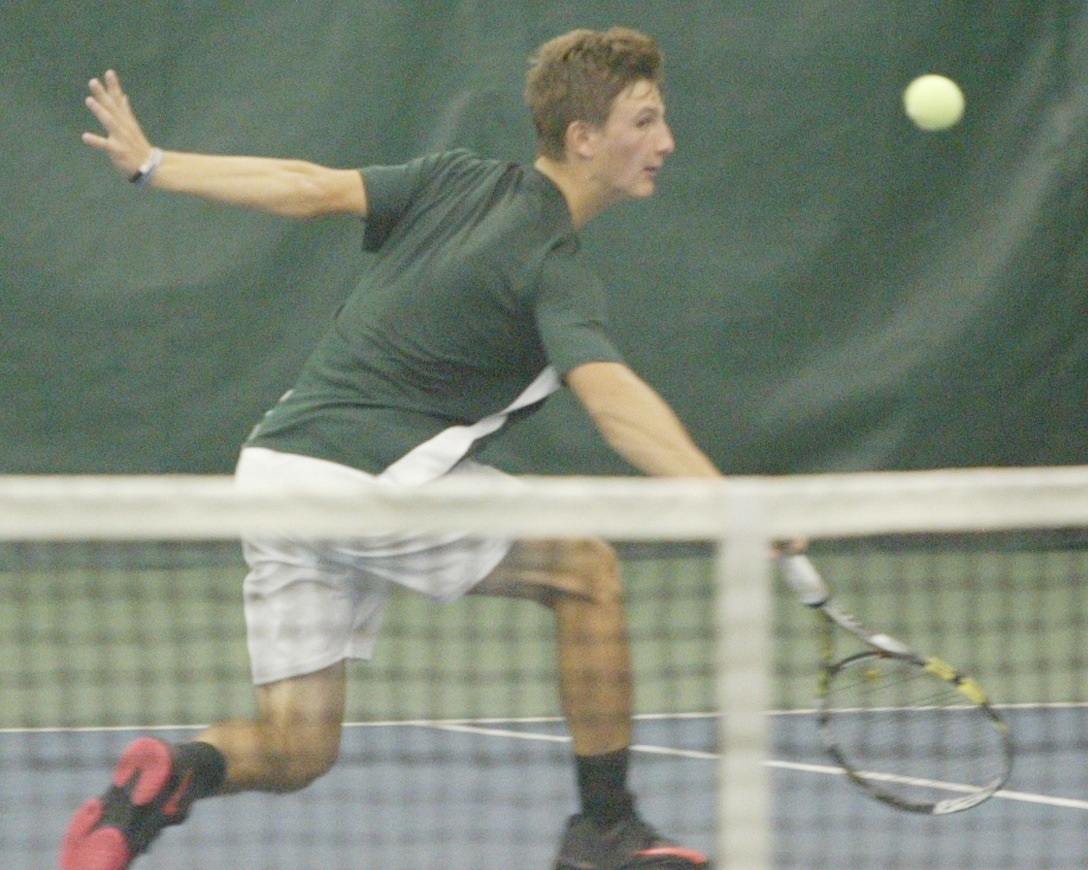 In singles action, the feature match came at No. 1, where a pair of seniors met in a rematch of last year’s title match.

“It was the same exact final as last year,” Solarewicz said. “We are both seniors, and it both meant a lot to us. The first set I started slow and I had some nerves, but then they wore off and I played my game and played my best.”

The title was the first for Solarewicz, who reached the semifinals as a sophomore and the final as a junior.

“To do it in my senior year is special,” Solarewicz said. “I know Matt real well. We played together in juniors, and it was a real great match.”

At No. 2 singles Kalamazoo Hackett sophomore Henry Hedeman made it two MHSAA titles in two years. Hedeman, who won at No. 3 singles last season, captured the No. 2 title this time with a 6-2, 6-1 win against Sam Holmes of Traverse City St. Francis.

“The competition was definitely stiffer at No. 2 singles,” Hedeman said. “I felt I played great the whole tournament.”

The win put Hedeman halfway to his goal of four state titles.

“That has been my main goal since last year,” Hedeman said. “After I won it last year I made it a goal to win it all four years."

Ann Arbor Greenhills made its presence felt in singles action by winning at Nos. 3 and 4.

At No. 3 singles, junior Gage Feldeisen turned back Ian Worthington of Grand Rapids Catholic Central 6-2, 6-1. As a captain this year, the win was special for Feldeisen.

At No. 4 singles, Greenhills freshman Sonaal Verma showed why he is ready to carry on the Greenhills winning tradition as he defeated Noah Katt of Kalamazoo Hackett 6-2, 6-0.

“It’s pretty special to come in as a freshman and win state,” Verma said.

With number seven in the books, the question for the Gryphons is: Can they make it eight straight next year?