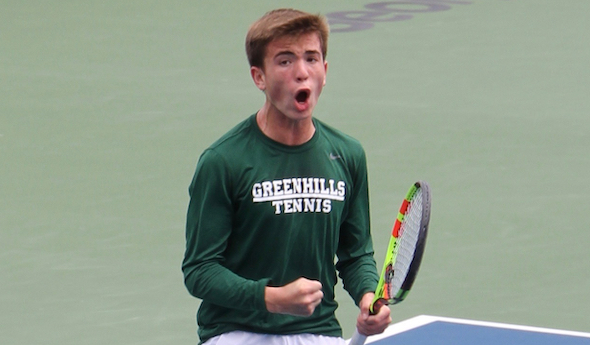 KALAMAZOO — Saturday was a perfect day for tennis and almost perfect for Ann Arbor Greenhills.

Bloomfield Hills Cranbrook Kingswood and Detroit Country Day tied for second with 24 points each, while East Grand Rapids and St. Clair tied for fourth with 22.

This is the first year in Division 3 for Greenhills, the D-4 reigning champ who had won that division nine of the last 11 years.

“We were looking forward to coming in to see what it’s like (in D-3),” Greenhills coach Eric Gajar said.

“It lived up to expectations. There are a lot of very good teams here on the second day of the tournament. We did well (Friday), but the kids felt it was a step up.”

Greenhills, which clinched the team title in the semifinal round, had the top seed in every flight except No. 4 singles.

That was a motivator for Gryphons freshman Chakor Rajendra, the second seed at that flight.

“He had a little chip on his shoulder because he had such a good year and was undefeated,” Gajar said.

“But then in three doubles, we were the one seed and lost to some guys seeded lower. That’s why you go out and play. Anything can happen.”

“I never knew that high school tennis could be this fun,” he said. “I’m part of a great team with so many amazing people.

“I learned a lot from this experience. I play USTA tournaments, and this is going to definitely transfer some of these things I’ve learned and help me become a better player and a better person overall.”

As for being seeded second, “I wanted to prove that I had what it took to be a state champion,” he said.

“I just wanted to do the best I could. Seeding is great, but in the end it doesn’t matter.”

Playing behind his younger brother is not a problem for the senior.

The No. 1 singles match finished first and “I didn’t want him to one-up me,” the senior said.

“There were intervals in my match when I was somewhat distracted with his match a little bit because I wanted him to win so badly, especially since he was down in his first set and had to claw back.”

Oral was up 2-0 in the second set, but then the momentum changed.

“(Pinnoo) hit some good shots, attacked more and was more aggressive,” he said. “I had like 10 set points.”

Pinnoo said the cheers from teammates helped motivate him.

“I kept fighting, keeping him in the point, making him move, tiring him out,” Pinnoo said.

“I just don’t give up and keep fighting for every point. I was trying to win for the team.”

Mert Oral admitted that being a top seed leads to a bit of extra pressure.

“I just tried not to focus on the seed (Friday) and play my way into the tournament and get a feel for everything.

“(Saturday), I was really able to find my A game.”

In the semifinal, “The guy (No. 4 seed Ben Collins of East Grand Rapids) brought the best out of me, and in the finals that was a great match. I was able to just get by.

“I mean, I had to come back in the first. It was just trusting my game.”

Distelrath upset No. 2 seed Nikolas Gruskin of Detroit Country Day, 6-3, 6-4, in the semifinal.

“It felt good because I lost to him in a full third during the regular season, and I was glad I got to play him again and get a chance to get some revenge,” he said.

Facing Oral, “He’s very good,” Distelrath said. “I went in with the mentality that I’ll give my best and work my hardest until I’m out of gas.”

Verma was broken twice to start the match down 0-3, but “it feels nice to bring it back and then bring it home.

“I generally don’t like to be the top seed, actually, because of the pressure. But I guess it worked out this time.”

Verma said he was inspired by his teammates.

“I looked at my teammates, and they were all fighting, too,” he said. “I was like, we came all this way.

“You’ve just gotta push, gotta put in that effort and find that extra gear, and I did.”

Both teams advanced to the finals with three-set wins in their semifinals.