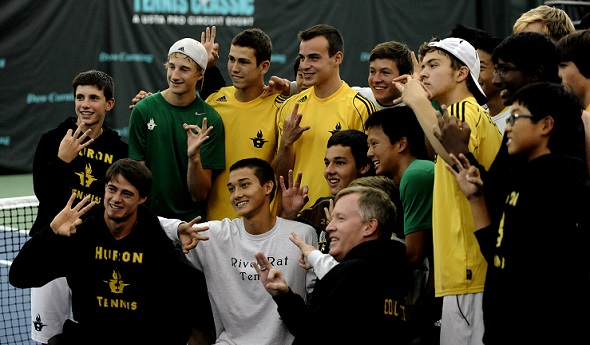 By Geoff Mott
Special to Second Half

If Brother Rice could beat two-time defending champion Ann Arbor Huron at No. 3 and No. 4 doubles, all three schools would share the 2013 team championship.

While Brother Rice pulled out a win at No. 3 doubles, Huron’s No. 4 doubles team of Will Brenner and Orion Sang held on for a 6-3, 7-5 win over Patrick Hamill and Dan Lunghamer to give the River Rats their third-straight Division 1 title.

“It was better that we didn’t know the state championship was on the line,” said Sang, who didn’t know Huron had won the title outright until he was mobbed by teammates after the win. “I had a little feeling that it was close because everybody was fighting so hard.

“This feels good. We always thought about (winning a third state title) and that’s been in the back of our minds.”

“We knew we had to win out but we just wanted to go out and do the best we could,” said Brother Rice senior Joey Hildebrand, who teamed with David Weatherford to beat Huron’s Jason Chen and Austin Luker, 3-6, 7-6 (7-3), 7-5 at the No. 2 doubles title match. The win set up the dramatic final two matches.

“It feels great because we wanted to give our team a chance to win this.”

Novi junior Tim Wang captured the individual championship at No. 1 singles. After a hard-fought 6-2, 4-6, 6-3 win over No. 5 seed Justin Hyman of Rochester Adams, the top-seeded Wang went on to knock off Northville’s No. 2-seeded Connor Johnston 6-1, 6-3 in the final. 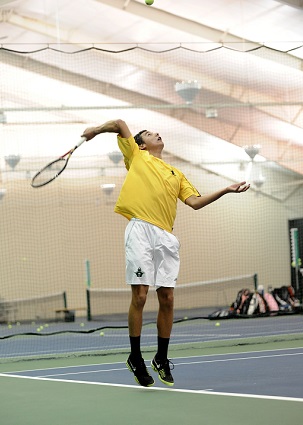 “I knew Johnston had a really tough match and while I had a three-setter (in the semifinals), Johnston was cramping up after a really tough match,” Wang said. “I had good shots today. I was playing great, and after he broke my serve in the second set, I found an extra gear.”

Wang ate bananas and drank Pedialyte to counter cramping issues that affected a lot of the athletes.

“I pride myself in fitness, and I’m really blessed that I haven’t had problems with cramping,” Wang said. “I might have been the No. 1 seed, but I had to play my best. This means a lot to me because it came down to who wanted it the most.

“I was ready to grind it out.”

Novi’s Koushik Kondapi won the No. 3 singles title with a 4-6, 7-5, 6-4 win over top-seeded Colin Williams of Huron while Novi teammate Maxx Anderson had treatments for cramps twice before delivering a 3-6, 7-6 (9-7), 6-3 win over Brother Rice’s Jack Winkler for the title at No. 4 singles.

“I think I became smarter with the cramping,” Anderson said. “I almost defaulted but my coach wouldn’t let me. If he would have said yeah, I would have defaulted. But I could hear my teammates chanting my name and there was no way I could stop.”

Ann Arbor Pioneer sophomore Ian Yi captured the No. 2 singles title, beating Rochester Adams’ Oliver Li 6-1, 6-2 in the final. Yi, who beat Ann Arbor Huron’s Kevin Mei in the semifinals (1-6, 7-5, 6-1) for the fourth time this season, had lost twice to Li this year.

“I went hard for all of my shots,” the 14-year-old Yi said. “I was able to edge him on big points. Coming in my goal was to get to the semifinals. I was really loving it when the people were cheering for me. It pumped me up even more.”

Huron’s six seniors have provided the leadership for another title run. While Jack Petersen (No. 1 singles), Kevin Mei (No. 2) and Colin Williams (No. 3) came up short of individual titles, seniors Aaron Brodkey and Akihiro Ota returned to clinch back-to-back titles at No. 1 doubles.

The doubles team’s only blemishes on the season came in a pair of eight-game pro sets, and Brodkey and Ota never lost a regular set on the year. After winning 6-1, 6-1 in the semifinals against Victor Flynn and Will Norris of Grosse Pointe South, Brodkey and Ota beat Brother Rice’s Connor Parks and George Hamaty 6-4, 6-2 in the final.

“There really wasn’t any extra pressure on us because we worked so hard all year to get the No. 1 seed,” Ota said. “We wanted to prove we were that good and it was a tall order (with the competition). This feels really good to go out on top.”

Teammates since seventh grade, Brodkey and Ota became leaders together while setting an example for the younger doubles players.

“We’re best friends,” Brodkey said of Ota. “You could ask me any question about him and I’d know it. When we break down for hitting drills, we don’t even join the group. We just hit with each other.

“We’ve made a pretty good team. I hit big shots to set him up at the net and he has some of the best hands you’ll see in the state in doubles.”

Top-seeded Brendan Dillon and Joe Paradiso captured the No. 3 doubles title for Brother Rice, outlasting Huron’s Michael Bondin and Danny Friedman for 3-6, 6-2, 7-6 (7-3) in the title match.

“I had a large group back this year with six seniors with a lot of experience,” Ann Arbor Huron coach Stefan Welch said. “Brother Rice and Novi were so close last year and you know they wanted it so bad this year so we knew it would be close.

“It came down to who would play well, and I’m so proud to be able to send these guys out on top.”