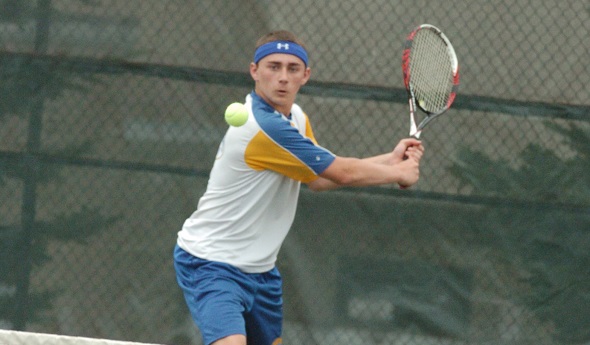 By Craig Remsburg
Special to Second Half

KHS last won an outright peninsula crown in 1953. The Flivvers shared titles with Marquette in 2008 and Negaunee in 2010.

Kingsford placed seven of eight flights in the finals Wednesday and won six.

“It has been a banner year,” Kingsford head coach Mark Shanks said in closing out his 13th season at the helm of the Flivvers. “We’ve been working on this (U.P. crown) for years.

Kingsford senior Sean Ryan, part of his team’s winning No. 2 doubles unit with Ted Pietila, said capturing the peninsula title had been on the Flivvers’ minds for “a long time.”

“After last year, we didn’t lose too many seniors, so we set this as a goal.” he said. “Every team skull session, we talked about the 60-year drought.

“It feels great this being our year.”

Sophomore Adam Szabo helped lead Kingsford with a 6-1, 6-0 win over Negaunee’s Ryan Syrjala at No. 2 singles.

“It was a pretty good match with a lot of line points,” said Szabo, who finished second last year at No. 2. “My serve was on, and I hit a lot of winners with my backhand.”

Other Flivvers who won titles were Daniel Harrington at No. 3 singles, Brady Hicks at No. 4 singles, Alec Tuchowski and Joe Gregory at No. 3 doubles and Tyler Schaut and Chris Roell at No. 4 doubles.

“We have seven sensational seniors, and these are the best group of kids I’ve had in my 26 total years as a tennis coach,” he said.

Cody Tossava of Negaunee High School closed out a brilliant high school career on a high note Wednesday by taking the No. 1 singles title — his third consecutive peninsula crown overall. He won twice at No. 2 singles before Wednesday’s No. 1 championship.

“I told myself afterwards he started it and I finished it (Wednesday),” the Negaunee netter said.  “I thought I really played well today. I served with consistency, and my forehand and backhand were good.”

Tossava came from behind in both sets, trailing 1-0 in the first and 2-1 in the second before winning both despite committing some unforced errors.

“Unforced errors are part of the game,” the southpaw said. “But I know what I’m capable of doing.

“My goal was to put (Harrington) on his backhand and spread him out. I did that, and it opened my forehand a lot.”

“In his tennis career, he has overcome a lot of adversity.” the coach said.

“Cody persevered and deep down, he’s a competitor, a tough kid. He’s one of the best in the U.P. and has helped set the stage for our program.”

The Miners saw their three-year reign as U.P. team champs — two outright — come to an end. They and Marquette finished with nine points each.

“Kingsford’s a strong team. We needed a near-perfect day to keep our (title) run going,” Saari said. “But today was good for us. Taking second is a good sign for our freshmen and sophomores. It will be a good learning experience and raise the bar for them.”

“Marquette’s always tough, but we just stuck to our game plan,” Fix said. “We communicated well and both moved at the same time.”

Added Eastin: “Teamwork and rushing to the net were big. It’s pretty awesome (winning a U.P. title). It’s nice to get it our senior year.”

Marquette coach Charlie Drury, who was without the services of No. 1 singles player Josh Downs due to a broken arm Downs suffered a week ago, said his team’s No. 1 doubles unit “just came up shy.”

“I was hoping Escanaba was getting tired, but it was a good match,” Drury said. “(The Escanaba duo) was experienced, sat back and let our guys make the mistakes.”

PHOTO: Kingsford’s Adam Szabo won the Upper Peninsula Division 1 singles championship at No. 2 singles to help his team to the team championship. (Photo by Craig Remsburg.)