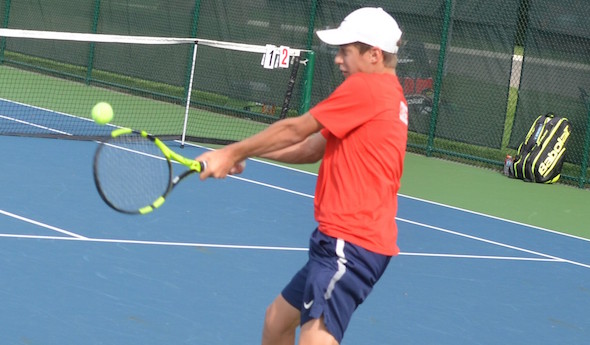 NOVI – With its second straight Division 4 team title minutes from being locked up, Grosse Pointe Woods University Liggett received a scare when William Cooksey, the second seed at No. 1 singles, went down writhing in pain after hurting his left wrist.

At the time, the team title was still on the line and he was up against Evan Sood of Ann Arbor Gabriel Richard, 6-1, 2-1.

After getting his left wrist wrapped, the freshman continued and prevailed 6-1, 6-3.

“I fell and it caught me off guard,’’ said Cooksey. “I fell awkwardly on it. There was no way I wasn’t going to finish. It’s just sore now.”

He scored five points on the weekend, but his final point ended up not needed as the Knights had already defended their title by edging Ann Arbor Greenhills, eventually claiming a 34-32 victory Saturday afternoon at Novi High School. Traverse City St. Francis finished third with 28 points.

“I thought it was broken when he went down; he’s still good enough to get the job done,’’ said Coach Mark Sobieralski of Cooksey’s injury. “He’s a tough kid and a good athlete.

“We’ve revived the program. Six guys on this team are four-year varsity starters. The experience was helpful. In three matches in the semis we met up with Greenhills, and we won all three. In two of the three there were match points against us.’’

High drama filled the air as three teams had a legitimate chance at winning the team title.

Friday’s first rounds left a three-team fight between Liggett, Greenhills and Traverse City St. Francis going into the semifinals, with each team sitting at 24 points.

Top-ranked Liggett and No. 2 Greenhills started to separate themselves going into the championship flight. Liggett had 31 points with Greenhills two behind at 29 and St. Francis trailing with 26.

However, the Gladiators and Ann Arbor Gabriel Richard had a chance to play spoiler with four spots in the finals.

Greenhills got one point closer when Kaan Oral beat Ian Sood of Gabriel Richard, 6-3, 6-2, for the No. 2 singles championship. It was the third time Oral beat Sood this season. 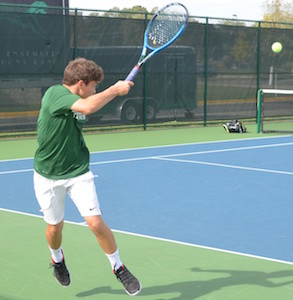 “Obviously this means a lot,’’ said Oral, a sophomore. “Winning eight years in a row and then losing last year was tough. We’ve all worked very hard all year to try and get back to where it belongs. It’s a dogfight. They’re working hard and they want it, and we want it even more.

“Ian is very consistent on the baseline and I just don’t try to give him any easy points.’’

Greenhills evened the team score when Drake Rosenberg and Taha Zirapury beat Matthew Lesha and Craig Buhler of Liggett 1-6, 6-3, 6-4, at No. 3 doubles.

“We lost to them pretty bad earlier in the year,’’ said Zirapury. “Liggett was the only team we hadn’t beaten. I was really nervous, and in the first set it was difficult for us getting balls back. Later in the first set we kind of figured it out, what’s Liggett’s game. We played against it, and that helped us come out on top.’’

“We set a team record for points scored at the final yesterday (Friday), so it’s cool being able to get to this point,” Sodini said. “I had played (Scoggin) before. We’re just all trying to beat each other – St. Francis, Greenhills and Liggett. We lost some close matches in the semifinals, so we’re just trying to get as many points as we can.’’

Liggett came through at No. 2 doubles with top-seeded Thomas Van Pelt and Spencer Warezak beating Sushruta Shankar and Joey Formicola of Greenhills, 6-7 (6-2), 6-2, 6-4.

“I try not to think about (the team title), but it’s very stressful,’’ said Van Pelt. “After the first set we had a really good meeting with our head coach Mark (Sobieralski) and our assistant coach. We didn’t play that well, and we still almost won it. That gave us confidence. We were reminded that we’re a team. We put it to them in the second set.’’

At No. 1 doubles Jack Harris and Trey Feldeisen of Greenhills defeated Alec Azar and Maddie Fozo of Liggett, 6-3, 7-5.

PHOTOS: (Top) University Liggett's William Cooksey returns a volleyball during a No. 1 singles match Saturday at Novi. (Middle) Greenhills' Nathan Rosenberg unloads during a match at No. 4 singles. (Click to see more from HighSchoolSportsScene.com.)