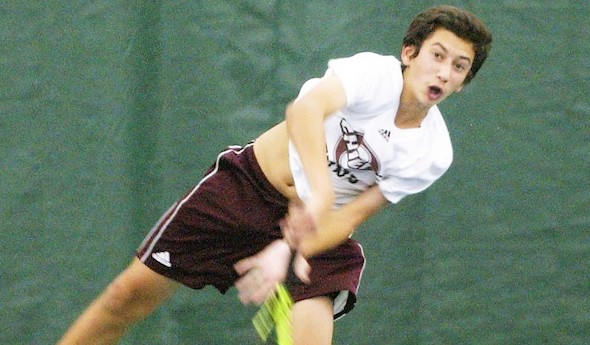 HOLLAND – What started with a love of the sport in elementary school grew into a second straight MHSAA Finals championship for members of the Okemos boys tennis team Saturday.

Led by a core group of players who began playing tennis together at a young age, Okemos won the Lower Peninsula Division 2 title with six flight championships and 37 total points. Birmingham Groves and Birmingham Seaholm tied for second with 23 points, with Grand Rapids Forest Hills Northern placing fourth with 19.

“We’ve known when these kids were 5, 6, 7 years old they were going to be good,” said Okemos coach Chris Silker. “They have stayed together. They have invested in each other and really pushed each other to higher levels every year.”

The No. 1 doubles team of seniors Zal Chinoy and Daniel Gorelik are a prime example of the long-time friendships on the team.

“I’ve known Daniel since I was in the second grade,” Chinoy said. “We started playing tennis together around that time. We built a friendship around playing tennis, and we kept it going for all these years and our chemistry is a main, main part of our game.”

Chemistry proved key as Chinoy and Gorelik wrapped up their careers by turning back Ben Adams and Aidan O’Neill of Birmingham Seaholm 6-1, 6-3.

“Actually Zal is the one that played tennis before me,” Gorelik said. “He was playing since he was 6 years old, and he was the one that brought me into it. He said, ‘Hey, you should try this sport.’ It’s actually surreal we are here right now playing one doubles together.”

At No. 2 doubles, sophomores Druv Talluri and Shrey Patel turned back Jonathan Cross and Owen Cross of Birmingham Seaholm 6-4, 6-1.

“It feels great,” Talluri said. “All the practice and it paid off.”

The duo both won flight titles last year as well. Talluri was part of the victorious No. 3 doubles team in 2017, while Patel won the No. 3 singles title last year.

Depth and balance are a major strong point of this year’s Okemos squad.

“We’re deep, we’re deep,” Silker said. “When you have a freshman that can come into the one-singles spot and pushes everyone down, it creates a stronger and deeper lineup.”

That freshman is Ozan Colak, who came into the tournament as the top seed at No. 1 singles. Colak more than lived up to his lofty ranking as he wrapped up the title with a 6-3, 6-1 win against Nathaniel Webster of Mattawan.

“Right now, I just can’t get this smile off my face,” Colak said. “It feels really good. I’ve had a lot of injuries, and to come out here and still play as well as I believe I can is huge for me. It’s a huge confidence boost. It just feels great to be on a team that is so good.”

At No. 2 singles, Okemos sophomore Joshua Portnoy stopped Anish Middha of Midland 6-1, 6-1 in the final. The win was extra special for Portnoy, as he lost in the final last year.

“I’m really excited because last year I fell short in the finals,” Portnoy said. “It just felt great coming back here and winning it. After the loss last year, I wanted to win it so bad, so I just worked really hard to come back this year and win.” 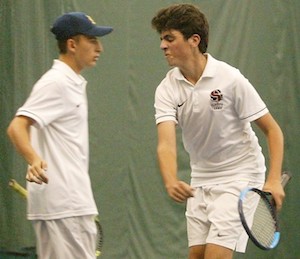 Okemos junior Benjamin Letzer claimed the title at No. 3 singles as he topped Saketh Kamaraju 6-1, 1-0 (retired). Letzer reached the quarterfinals at No. 1 singles last year and No. 2 singles as a freshman, and breaking through this year was special.

“It was a lot of fun getting a state championship,” Letzer said. “We have a lot of great guys on this team, and we are really positive and that helps.”

Winning the team title made the day even more special for Letzer.

“It’s really amazing,” Letzer said. “We have this great team chemistry and we’ve been playing this great tennis for two years. Hopefully we can keep it going.”

Sophomore Rohan Shah capped the sweep of singles flights for Okemos when he turned back Owen Goodrich of Forest Hills Northern 6-0, 6-1 at No. 4.

“It was really cool winning four singles,” Shah said. “We have a special team. We have just amazing players, and it’s truly an honor being on this team. The seniors this year really worked their tails off, and it’s amazing to see them win a second title.”

Birmingham Seaholm finished the tournament with a pair of flight championships. At No. 4 doubles, the team of junior Fred Kassab and sophomore Nolan Werner outlasted Brett Kovan and Ethan Weitzman of Birmingham Groves 6-4, 6-3. The Seaholm duo entered the tournament seeded fourth but defeated top-seed Okemos in the semifinals and third-seeded Groves in the final.

“It’s crazy,” Werner said. “We were the number four seed, so we were not even projected to be here. We took down Okemos and took down Groves, two very good teams, so it worked out pretty good. We were just more aggressive at the net. We were making our serves, cutting more, it was great.”

Confidence was also a big part of Kassab and Werner’s success.

“I didn’t think we could do it at first,” Kassab said, “but we just took one match at a time, one point at a time and we persevered and won. We knew we had it in us.”

Seaholm pulled another upset at No. 3 doubles, where the second-seeded team of Max Levitsky and Cameron Lee outlasted the top seed from Okemos, Siddharth Nagisetty and Aditya Kandula, 7-6 (2), 6-4.

For Levitsky, a senior, winning capped a career that saw him finish as a runner-up at No. 3 doubles last year and a quarterfinalist at No. 3 singles as a sophomore.

“It’s fun to go out with a win as a senior,” Levitsky said. “I think we won more of the big points, and we played our game really well. This feels pretty good.”

Lee, a junior, reached the quarterfinal round as a singles player last year.

“This feels awesome,” Lee said. “It’s extremely special. I think we just outplayed them. We capitalized on the easy balls, and we weren’t nervous or tentative.”

PHOTOS: (Top) Okemos freshman Ozan Colak follows through during No. 1 singles action Saturday. (Middle) Birmingham Seaholm’s Nolan Werner and Fred Kassab encourage each other during a No. 4 doubles match. (Click to see more from HighSchoolSportsScene.com.)