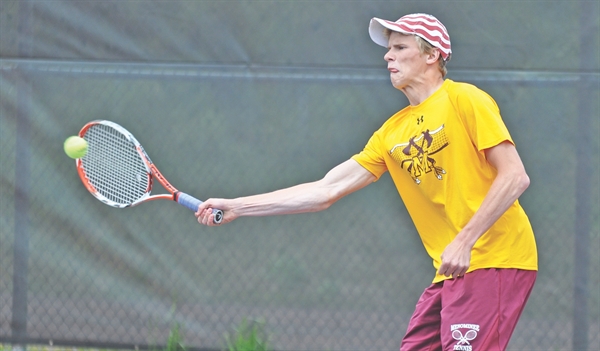 By Steve Brownlee
Special for Second Half

NEGAUNEE — A tale of two strategies worked out about as well as possible for the Negaunee and Menominee high school tennis teams Thursday afternoon.

In the end, each won its final match of the day to forge a tie for the MHSAA Upper Peninsula Division 1 boys tennis title at the Miners’ courts.

It will be considered a win for each school, with each adding to its respective trophy case. A duplicate will be ordered and sent out, of course, so each team can claim the ultimate spring victory.

The Maroons claimed their half of the title when juniors Levi Kempka and Jake Anglehart pulled out a comeback 4-6, 6-3, 6-2 win over Negaunee seniors Jacob Paupore and Matthew Jandron in the No. 2 doubles final.

Theirs was one of only two matches still going late in the afternoon at the new set of eight side-by-side courts at Negaunee High School.

Asked if they had an inkling their match might help determine the meet’s winner, Kempka said they had much more than an inkling.

“Right after the first set was over, (Menominee) coach (Troy Reuter) came over and asked if we wanted to know where we were in the meet,” Kempka said. “I said, ‘Yeah, tell us.’ And he said if we won, we wrapped up at least a share of the title.

“I think we started playing a lot better after that. The intensity went way up.”

The second-year doubles partners rallied to win those last two sets and get their team to 16 points.

Sertich would need a win to get Negaunee to its 16th point.

However, he had no idea what was on the line.

“I had no idea what the magnitude of the match was,” Sertich said. “I just thought that it was the last match.”

“We try to keep our distance and stay quiet in those kind of circumstances,” Negaunee coach Kyle Saari said. “Just let nature take its course.”

That was readily apparent as Menominee players and coaches crowded close to the fence to watch the outcome of the match, while no one from Negaunee stood within 40 or 50 feet of the adjoining outside fence where Sertich was playing.

“You’ve got to give Thomas credit,” Saari said. “He’s a consistent hitter, he hits a slow ball back, and at No. 4, that can be frustrating to a lot of players.

“Give him credit, too, especially with the pressure of having two teams rooting against you.” 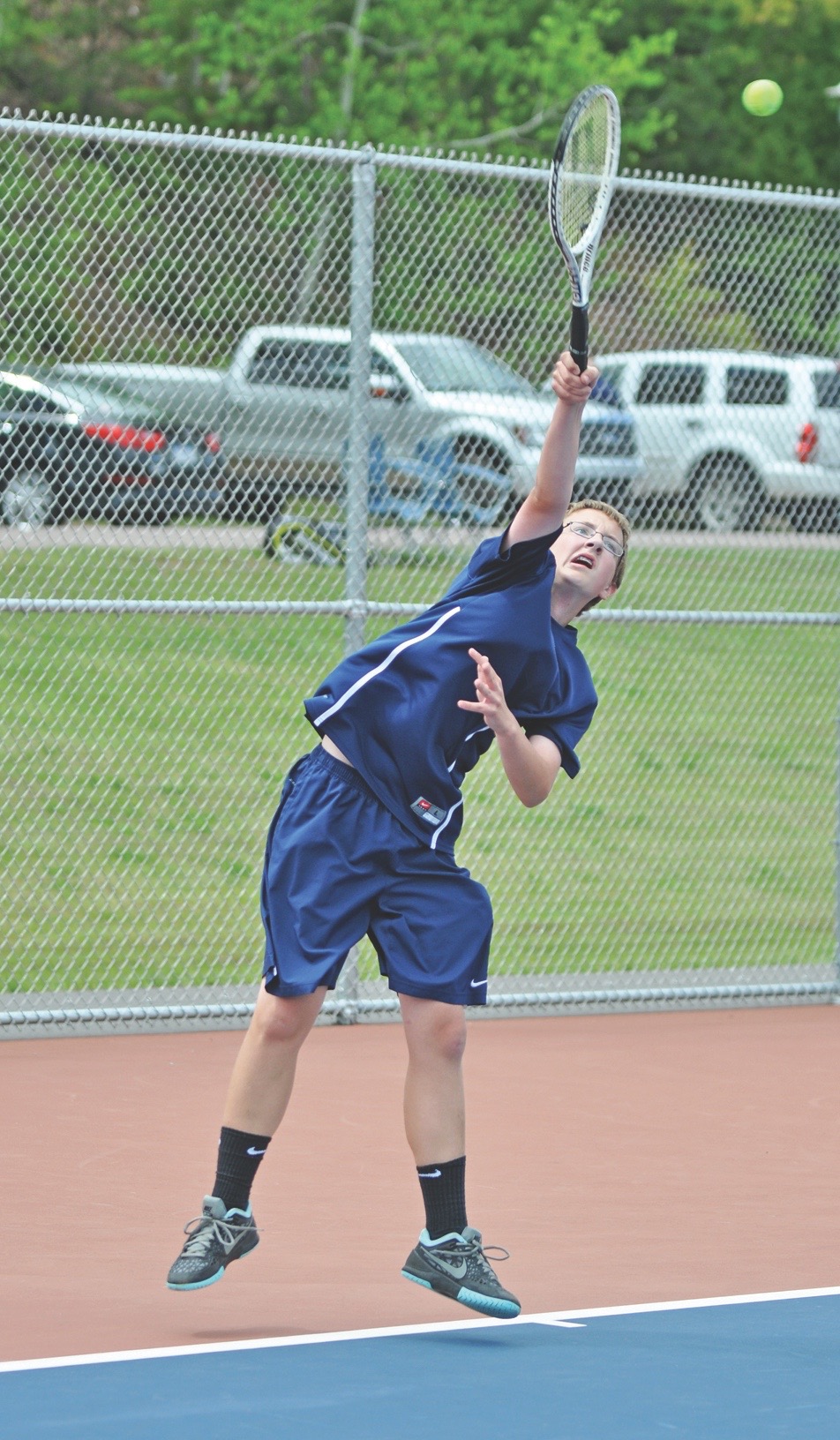 “What it comes down to, going back to 2010, is that the groups (of players) that follow watch it being done, and that next group comes in not only expecting to contend, but believing they can do it.

“It makes them work that much harder to see if they can achieve more than the group that preceded them.”

On Thursday, Menominee won four flight championships and Negaunee three, accounting for all but one title among the eight flights as each scored 16 points.

Despite not winning a title, Kingsford finished third with 12 points as the Flivvers had four runner-up finishes.

Escanaba was fourth with five points, followed by Marquette with four and Gladstone with one.

The Redmen had the other champion, freshman Alec Olivier at No. 1 singles. He slipped by Kingsford’s Brady Hicks 6-2, 6-0 in his finale.

Menominee also got wins from No. 3 singles player Mitchell Boucher, 6-4, 6-4 over Negaunee’s Luke Skewis; the No. 1 doubles tandem of Adam Nolde and Aaron Maas, 6-4, 6-1 over Brett Hicks and Chris Roell of Kingsford; and the No. 3 doubles pair of Peyton Mileski and Joe Anttila, 6-4, 6-1 over Negaunee’s Dylan Tasson and Peyton Anderson.

PHOTOS: (Top) Menominee's Aaron Maas takes a swing during the No. 1 doubles championship match against Kingsford on Thursday. (Middle) Negaunee's Thomas Sertich serves the ball during the No. 4 singles semifinal match against Escanaba's Christer Carne. (Photos by Elizabeth Bailey.)