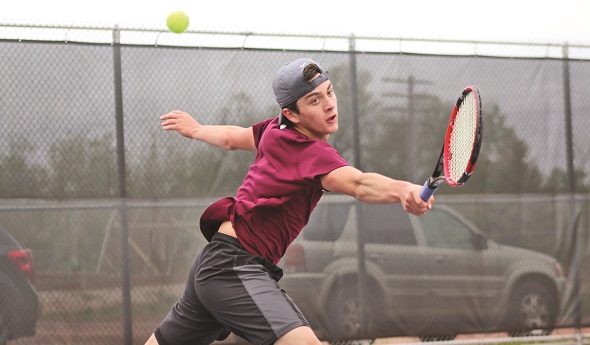 NEGAUNEE — Welcome to late spring in the Upper Peninsula.

With a stiff northwest breeze whipping across the Negaunee Tennis Facility coupled with off and on drizzle and temperatures in the mid to upper 40s, conditions were far less than perfect for Wednesday’s Upper Peninsula Division 1 Boys Tennis Finals.

The Negaunee Miners didn’t seem to mind, however, as they retained their title with 21 points.

“I think the wind helped me a little,” said Negaunee junior Thomas Sertich, who outlasted Kingsford’s Nick McCole 6-0, 2-6, 6-2 for the No. 3 singles crown. “I feel comfortable playing in any conditions. I talked to our coach (Kyle Saari) after the second set, and it helped me a lot. He told me to regroup and hit the reset button.

“My experience helped. I knew what I had to do. I felt I had to do what I was doing in the first set. It feels wonderful to win again as a team. This is what we work for all year.”

The Miners sent seven to the championship round and won six flights. The title was the program's fifth this decade.

“I think the best part is all eight flights contributed to our point total,” said Saari. “The kids bought into the idea they wanted to play their best tennis on the last day of the year, and they did that. Getting to the finals is always part of the goal. To win six flights is a rewarding feeling. Each group wants its own accomplishment.”

Teammate Luke Skewis topped Menominee’s Jake Anglehart 6-3, 6-2 for the No. 2 singles championship and freshman Chas Kumpula added a title at No. 4. Kumpula finished 20-1 this season.

Negaunee’s Jacob Talaga and Darius Provost finished 21-0 in No. 3 doubles with a 7-5, 6-3 triumph over Esky juniors Alex Valentine-Soren Thompson.

“It was fun,” said Valentine. “I got a lot of experience for next year. It was pretty hard to hit into the wind, and the court was a little slippery.

“I’ve learned that you have to push yourself to the net and put shots away at the net. It’s good to get used to playing in these conditions.” 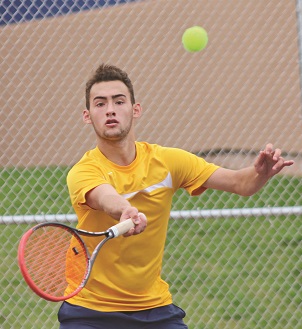 In No. 2 doubles, Negaunee’s Jackson Sager and Drew Lindberg dispatched Marquette’s Adam Skendzel and Mitch Connon, and Evan Hassel and Jake Larson rallied past Kingsford’s Reece Fortner and Ethan Fox 5-7, 6-4, 6-3 at No. 4.

“That helped us relax,” he said. “It looked like they were trying to slow us down. We just tried to relax and hit our shots.”

The eventual champions also appeared to have an answer whenever the Eskymos duo tried to charge the net.

“We would lob the ball over their head,” said Fortner. “We tried to hit the angles and make them run a little. Returning the ball to the opposite side enabled us to get back into a pace we were more comfortable with.”

“Everything went pretty good,” said Olivier. “I started out pretty good. Eric kept battling. He played well. I had to earn my points. The wind made it a little tricky. But if you prepared for it, it was no big deal.

“I put a lot of time in during the offseason, which really helps. That way, once you get into the season, you’re ready to go. I just have to keep hitting balls and fine-tune everything.”

“I played a long, tough match with Jon,” he said. “I’m happy with how everything turned out. Alec is very consistent and accurate with his shots. He’s a smart player who knows when to hit his shots.

“I’m real happy we won as a team. We played really well today.”

Marquette coach Charlie Drury also was happy with how the Redmen performed.

“This was our best showing all year,” he said. “We had a great group to work with. This has been a tough year. The weather has made it tough all year. It was hard to get any continuity, especially in doubles.”