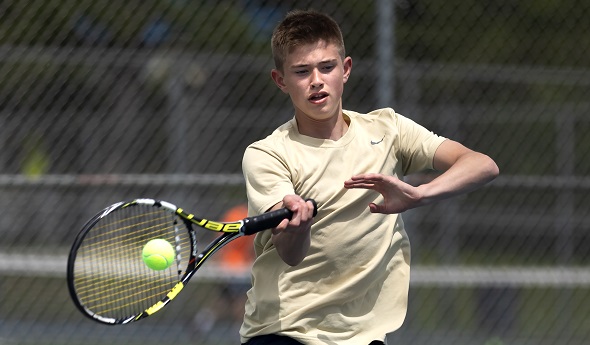 Olivier finished his high school tennis career with an unblemished 63-0 record and capped it with his fourth UP title at No. 1 singles.

While going undefeated through high school wasn't a goal when Olivier started out as a freshman, he said, the quest to maintain a perfect record brought more pressure as he played over the seasons.

"I'm happy it's over. Very stressful trying to go undefeated my whole career," Olivier said. "Really glad I was able to stay undefeated. I think my first year I was the only person to make it in the finals. Now we've got five people in the finals. Really looking forward to what comes of Marquette tennis."

Negaunee took the team win with 21 points. The Miners won all but two flights. Olivier and teammate Benjamin Sternschuss were the only ones to thwart the Miners in the finals.

Down by two points in the second set, the Miners duo of Jakson Sager and Drew Lindberg rallied back to win 6-2, 7-5. The comeback underscored Negaunee's ability to overcome adversity to win its fourth consecutive UP title and eighth of the last 10.

"It's a belief. I think the biggest time that's evident is when you end up in a pressure situation," Negaunee head coach Kyle Saari said of the team's resilience. "If it's 5-4 or if you end up getting into a third set, you see people do it before or if you've done it before yourself, you don't feel the pressure – you can apply the pressure." 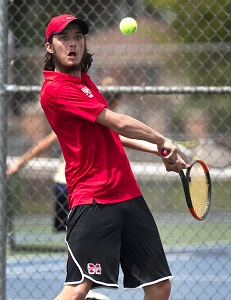 Saari said the team's winning culture has centered on a team-first approach – a win in any flight is embraced by each player in every flight.

"We understand that most seasons we come in there's a pretty sizable target on our back," Saari said. "These kids, they kind of embrace that challenge and understand the tradition they've built to pass the game on to the next group that comes in. Back from the first day of practice, this is always one of the goals that we set. They work hard day in and day out and support each other. They definitely do it as a team sport. That's always the unique side of it is they embrace each other’s success, and that's what's most neat to be a part of."

"Coming in we were the underdog because we had lost to them two times earlier this season," she said. "Winning (the Great Northern Conference tournament) last week, I was hoping we could pull it off. Negaunee has such a solid one doubles team, I knew it was going to be tough no matter which way it went. Last time we played them it went to three sets. We were right there with them."

Asked what's different about his tennis game in his senior year compared to his freshman year, Olivier ran his fingers through his beard.

"I've got a lot longer beard," he said with a smile. "I'm definitely a lot more mature. I've got a much better understanding of tennis. Playing a lot of matches you get a good understanding of how the game works and how your points play."

"Playing at No. 1 you're always facing the best players," Drury said. "To be able to do it for four years is just a remarkable feat. I don't think anyone has done that, at least not in the last 50 years that I'm aware. Alec's been solid. He's had a lot of pressure to keep that record going. He's done just a tremendous job and (I) couldn't be more proud of him."

"Couldn't be more pleased with the guys," Drury said. "I felt as though we were gaining ground going into this tournament. I really think that our guys learned something today to compete with a good team like Negaunee. You've gotta work hard, and today they really did. Negaunee edged us out, but they deserve the win."

PHOTOS: (Top) A Negaunee player returns a volley during Wednesday’s Upper Peninsula Division 1 Finals. (Middle) Marquette’s Alec Olivier gets set to send back a shot during his run to the No. 1 singles championship. (Photos by Adam Niemi.)