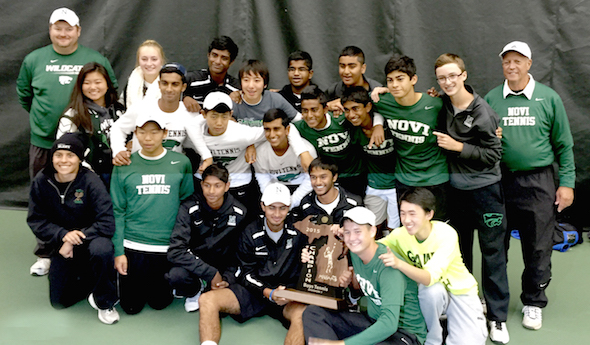 MIDLAND – The unexpected snow squall that hovered over the Greater Midland Tennis Center during Saturday afternoon couldn't stand in the way of the Novi boys tennis team staking a claim to the Lower Peninsula Division 1 championship.

"This is one of those days that you won't forget," said Novi coach Jim Hanson. "We came into the season with a lot of high expectations, but when you lose one of the top players in the state to graduation you put a lot of focus on getting better. The guys got better all year long and we were able to hang on in the end. It's wasn't easy, to say the least."

Friday's action was indoors at the Greater Midland Tennis Center. Once Saturday's finals came around, not only did the players have to battle their opponents, they had to battle the elements as well. 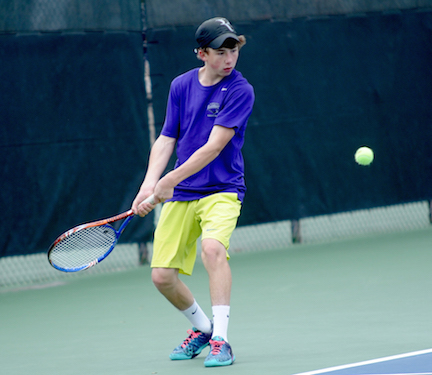 After the majority of players started the day outdoors, the weather forced the remaining players indoors for a second straight day.

"The only good thing about the weather Saturday was that it wasn't windy," Hanson said. "The guys are out their moving around. It's tough for both players in a match. It's Michigan. You never know what you are going to get weather-wise so you have to be prepared at what Mother Nature throws at you."

"Everyone who stepped on the court today faced the same elements. We just tried to get their mindset on what they were about to face," Welch said. "They know the ball bounces differently outdoors than indoors. It was a cold one for sure, but I think our kids were prepared for what they endured."

In singles action Northville's Connor Johnston finally broke through at No. 1 singles.

The top-seeded Mustangs standout finished his high school career with titles as a freshman (at No. 2 singles) and senior, with  a 6-4, 6-0 victory over Bloomfield Hills’ second-seeded Josh Mukherjee to claim the No. 1 singles championship. Johnston lost to Novi's Tim Wang in No. 1 finals the previous two seasons.

Johnston fell behind, 3-4, then won the next three games to take the first set. Riding the momentum, Johnston broke Mukherjee to start the second set, firing a fist-pump at his teammates. He closed out the match by winning the final nine games.

By the time the snow came and forced the action indoors, Johnston had won seven straight games. 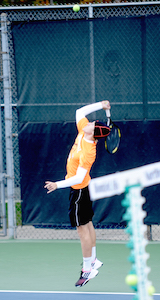 “I thought it was funny playing tennis in the snow,” Johnston said. “Worst possible timing. Never done that before. It was a good match to remember."

Novi sophomore Alex Wen fought through an illness that caused him to put down his racket for five months. A champion as a freshman at No. 3 singles, he moved up and won No. 2 singles, 6-4, 7-5, against Bloomfield Hills freshman Andrew Zhang.

The team title came down to the No. 4 singles match between previously unbeaten Brad Silverman of Bloomfield Hills and Chris Chio of Huron.

Silverman won the first set, but lost the final two, 3-6, 3-6. The result meant that Novi and Bloomfield Hills tied at 26 and shared the title.

Huron’s No. 2 doubles team of Austin Choi and Robert Dong beat rival Pioneer in the final, 6-3, 6-4, against Sayhann Goraya and Nico Figueroa.

PHOTOS: (Top) Novi poses with a championship trophy after winning a share of the Lower Peninsula Division 1 title, its second straight. (Middle) Bloomfield Hills also won a share of the title, its first since the school was created from a merger of Lahser and Andover. (Below) Northville’s Connor Johnston won No. 1 singles after finishing runner-up the last two seasons. (Click for more from HighSchoolSportsScene.com.)