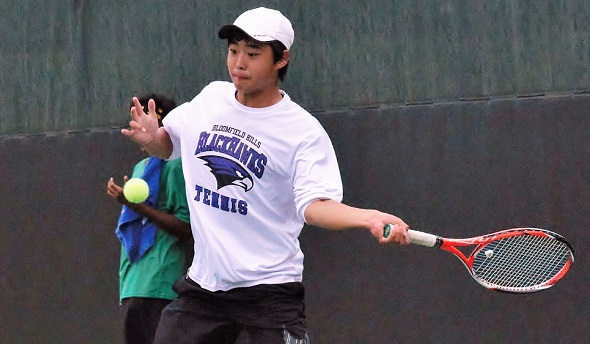 Zhang moved up to No. 1 singles this season after claiming the No. 2 championship at last season’s Lower Peninsula Division 1 Finals, and he hasn’t missed a beat. The Black Hawks’ top player won his Regional last week, defeating Clarkston standout Luke Baylis 6-0, 6-4, in the No. 1 championship match to earn the Michigan Army National Guard “Performance of the Week.” He has only one loss this fall as he enters this weekend’s Finals the second seed in his flight.

In addition to Zhang’s win at No. 2 singles last year, he also finished runner-up at that flight as a freshman in 2015 in helping Bloomfield Hills to a shared team championship. The Black Hawks finished runner-up last season, two points behind winner Ann Arbor Huron, but entered this postseason as the top-ranked team in the state coaches association poll. Zhang’s lone defeat this fall came to Troy’s Steve Forman, the reigning LPD1 champion at No. 1 singles and the top seed in their bracket this weekend at the Midland Tennis Center. Zhang also had faced Baylis (this weekend’s fourth seed at No. 1) in last season’s Finals championship match and two more times earlier this fall before last week’s Regional.

Zhang is a highly-regarded college prospect nationally and could’ve chosen to not play high school tennis – but noted that he “loves the team aspect of it; our team is so fun, we do all of these outside activities and tennis is just a great time to have a bunch of teammates outside supporting you.” He’s not sure where he’ll continue after high school, but he also carries a 3.95 grade-point average and is considering studying something in the medical fields or business when that time comes – after working for another championship this weekend and playing another season of high school tennis in 2018.

Performance Point: “It was just a great match overall,” Zhang said of facing Baylis at the Regional. “I thought at the beginning I played a little more solidly than he did. It was 3-0 in the first set and it started to sprinkle a little, and it got a little dark outside so we moved it indoors. I thought Luke’s game overall suits indoor better than being outdoors, and the match was way more competitive after the first set. I was actually pretty worried because last year during leagues, it rained that day, and we had to move indoors and it was my only loss (of last season).”

Game changer: “I’m really trying to work on my aggressive game and making my serves a lot bigger than normal. A problem last year was that a lot of people were attacking my serve, so I’ve been trying to add speed to it, add consistency to it. Overall my defensive game has been one of my strongest parts, my counter punching, so my coach and I are trying to play a more aggressive game. In a way I like both – even though playing defensive tennis and counter punching tennis is more exhausting than playing offense, I feel more confident right now playing defense. The offset is offensive tennis gets a lot more free points and you’re not as tired at the end of a match. So in the long run I’m going to keep on trying to build my aggressive tennis game, so hopefully in future tournaments that go longer, a week long, I’ll have more energy as I progress through the tournament.”

Familiar faces: “I definitely think rivalries form (from seeing the same players during high school and USTA seasons). Everyone’s very competitive. Everyone is trying to be the best out there. Usually the top people in the Midwest play in the top Midwest tournaments, play in the Midwest finals, and everyone is trying to be the best they can. I do look forward to (seeing those players in high school). It gives me a great time to work on my shots and be competitive, and to play a guy like Forman again – I just had a loss to him, and it gives me motivation.”

Solving the puzzle: “I just love this sport. I just really enjoy that it’s just you on the court. There’s no coaching in between. It’s just you versus your opponent. You have to figure out ways to dissect your opponent’s game, figure out how to beat him.”

Rafa Respect: “I really love Rafael Nadal. I love how he puts 110 percent into every single match. And he never has a bad temperament. He’s pumped to play the game, but he’s one of the few people that hasn’t broken a racket yet. I think he respects the game a lot. He’s just a great person on and off the court.”