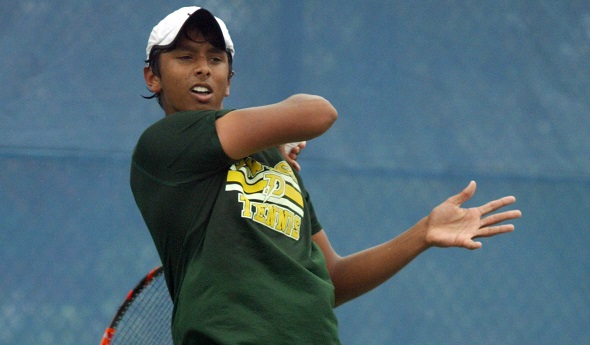 Shanker finished an incredibly successful and in ways unprecedented career Saturday by winning the No. 1 singles championship at the MHSAA Lower Peninsula Division 2 Final while leading the Chargers to their first team championship since 2013. Shanker became the first No. 1 singles champion for his school's prestigious program since 1999 and finished 32-1 this season in earning the Michigan National Guard “Performance of the Week.”

This was Shanker’s third season at No. 1 singles; he also won No. 3 singles as a freshman as Dow earned a fifth straight Division 2 team title. The next fall, Shanker became the first sophomore captain in Chargers history, and as a sophomore and junior he made the Division 2 semifinals at the top flight. But this fall was special; Shanker’s only loss was to Birmingham Groves’ Gabe Liss, who Shanker came back to beat two weeks later, and total his season sheet included victories over four of the top-six seeded players in Division 2 and three of the top five at the Division 1 Final including eventual champion Steven Forman of Troy. Shanker had 11 wins over players considered among the top 100 in their age groups in the Midwest, including a 7-6 (6), 3-6, 7-6 (8) nail-biter over Kalamazoo Loy Norrix freshman Reed Crocker in Saturday’s championship match. Shanker finished 115-19 over his four varsity seasons.

Shanker followed into the program his brother Vikram, a 2014 graduate who remains tied for second in MHSAA history with 132 career doubles wins and who was named an MHSAA/Farm Bureau Scholar-Athlete Award winner as a senior. Similarly, Varun has a 4.0 grade-point average (4.79 weighted) and is a National Merit Scholarship semifinalist. He’s been part of teams that have won three first-place A.H. Nickless Innovation Awards and a total of $135,000 in scholarship and grant money for work in water purification by electrodialysis, piezoelectric devices and microbial fuel cells. He’s contemplating studying biomedical engineering as he considers opportunities for academics and tennis at the next level.

Coach Terry Schwartzkopf said: “As Dow’s only three-year captain in history, Varun demonstrated the character, drive, determination, and dedication needed in order to claim a championship. In terms of community, he has organized beautification projects within Midland and participated providing free tennis clinics in the tri-cities. He has handled grant applications for team income, ordered inventory including uniforms and warm-ups, and handled media relations. As for athletics, we have had talented teams who won championships based on the depth of talent. This year, it was based upon work and improvement. Varun spent the offseason corralling kids, encouraging them to train, and even offering rides when needed. During season, he would work daily with players individually, deconstructing and rebuilding pieces of their game. He ... worked more as an assistant coach than a player. Varun unified, inspired, and took players to task when needed. He had no issue calling out players due to lack of effort and praising those who worked hard. In 17 seasons as a coach, Varun is without a doubt the strongest captain I have ever had. There was never a single time in four years where I questioned his loyalty to the program, his drive to succeed, or his willingness to give all he had to help his team succeed. In fact, I have never wanted a player to win a championship more than him because that was never his focus. From the beginning, his focus was team. He was content that if he played his best he would be satisfied with his outcome, provided the team was successful."

Performance Point: “Coming into the tournament as the one seed, there’s always a little pressure,” Shanker said. “For me, this year was different. This year, I knew, was my chance, that I could do something special. That I could fulfill my dream of always winning the one singles position. I knew I’d have tough opponents to play in the tournament, but I definitely came in with a focused mindset, and obviously it’s tough to not reflect on that last match, those last few points. … I was down two match points, and he literally needed one point to win twice. I want to say my back was against the wall; that’s as close as it’s going to be. To me, it was about believing. I saw my teammates cheering for me; I saw my coach. I saw it was (about) way more than one match, but all the support, and I was able to find it in myself to get a little bit tougher and mentally to be able to pull it out. The support was unbelievable.”

Dow dynasty: “It’s been unbelievable. We had a tradition of excellence here when I came in as a freshman; we had won four consecutive state titles. When I finally joined the team freshman year, I was finally able to understand why it’s like that. Coach instills hard work and preparation, and that was the reason we were able to achieve that. As my career progressed, I was able to learn what some of the things are that are able to make us successful, what some of the things lead to. During my four years, we had a lot of ups and downs – that’s definitely fair to say. My sophomore year, actually, we were supposed to win the state title (Dow finished third). It was a little bit of a letdown to walk away, but that definitely fueled the next few years. We learned how to get back up and dust ourselves off.”

Vikram’s lead: “My brother has had the biggest impact on my life, sports, academics – pretty much every facet of my life, and I do credit him for a lot of this. Growing up, the first reason I picked up a tennis racket was him. I was always big into swimming, but ever since he picked up a racket, I followed suit. He’s a great supporter and has always been a great coach for me.”

Name on the shirt: “High school tennis always has been one of my most favorite parts of the year. Being able to combine the team element to (tennis), it’s hard to describe, but it really enhances it being able to share the process with a group of teammates, both practice and competition. It truly does become a team sport. Representing my school and the community has been a favorite part of high school, rather than just playing as an individual on the USTA circuit. The community in Midland has helped us a lot in becoming great athletes, especially the Midland Tennis Center. Being able to represent playing for my school, it allows me in a certain way to represent the great things they’ve helped us (accomplish).”

Dr. Shanker: “I’m not sure whether I want to go into biotechnology; I definitely always have aspired to be a doctor. I just love that being a doctor, you’re able to help people, but you’re also on the cutting edge of science. That always has been really intriguing to me.”