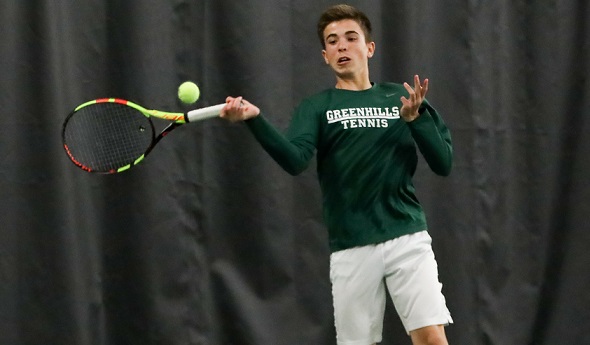 Familiar faces in new places could lead to some substantial shaking up at this weekend’s Lower Peninsula Boys Tennis Finals.

Two-time reigning Division 2 champion Okemos is playing in Division 1, and reigning Division 4 champion Ann Arbor Greenhills will take a run at Division 3 this time. That means new champions for sure in their former divisions – among a lot of other opportunities all over the brackets for teams and individuals hoping to make history.

Play both Friday and Saturday begins at 8 a.m. Click for full brackets for all four tournaments, plus Regional results, and come back to Second Half early Saturday evening for coverage from all four Finals.

Huron tied with Bloomfield Hills Brother Rice for a distant second behind reigning two-time champion Bloomfield Hills a year ago, but is expected to emerge for what would be its fifth championship this decade (after most recently winning in 2016). Northville was fourth and Troy fifth a year ago, and both are seeking their first MHSAA Finals championship in this sport. Another team of note might be Okemos, ranked sixth but coming off two straight Division 2 championships.

Northville: Five flights are seeded, led by second-seeded Rachit Jain and Rohith Kesamneni at No. 4 doubles. Other veterans could play big roles. Matthew Freeman is seeded sixth at No. 1 singles and won No. 4 last year. Daniel Dong is part of the an unseeded No. 1 doubles and Justin Yang is part of the fifth seed at No. 3 after they combined to finish runner-up at No. 2 doubles in 2018.

Bloomfield Hills Brother Rice’s J.J. Etterbeek: He came back after losing the first set of the final to win No. 2 singles last year as a freshman, and this time he’s the fourth seed at No. 1.

Clarkston’s Luke Baylis: The Wolves senior will attempt to cap an accomplished high school career with his first championship. He’s seeded second at No. 1 singles after making the semifinals the last two seasons and finishing runner-up at No. 2 as a freshman.

Troy Athens’ Gabe Brown: He made the No. 1 singles quarterfinals last year as a sophomore and enters this weekend as the third seed in the top flight.

Okemos’ Druv Talluri and Siddharth Nagisetty: With different partners they’ve won a combined three flight championships over the last two seasons. Talluri was part of the Division 2 No. 2 champ last year when Nagisetty was part of the runner-up at No. 3, and together they are seeded first at No. 1 this weekend.

With Okemos moving to Division 1, there is guaranteed to be a new champion for the first time in three years – and it would be a special celebration if any of the top three-ranked teams finished first. Forest Hills Northern is seeking its first title since 1998, while U-D Jesuit and Seaholm have never won an MHSAA Finals in this sport. All three have finished Division 2 runner-up at least once, however, over the last six years.

Grand Rapids Forest Hills Northern: The Huskies are seeded at every flight as they play for their first top-two finish since coming in second in 2014. They finished fourth a year ago with Owen Goodrich placing second at No. 4 singles, and he’s the second seed at that flight this weekend. Three other flights are seeded as high or higher, with top-seeded Cole Rynbrandt and Justin Lee leading the way at No. 2 doubles.

Detroit U-D Jesuit: Seven seeded flights are a great start for the Cubs, with top seeds at No. 1 doubles in Kagan Shetterly and Theodore Yaldoo and No. 3 doubles in Teodore Melnyczuk-Gould and Nathan Comerford. Yaldoo and Comerford played singles at the Finals last season as U-D Jesuit tied for seventh as a team.

Birmingham Seaholm: The Maples tied Birmingham Groves for second last season, their highest Finals finish since also coming in second back-to-back in Fall 2007 and 2008. Six flights are seeded this time, all fourth or higher for their respective flights. Cameron Lee was a champion at No. 3 doubles last season and Jonny Cross was part of the runner-up at No. 2, and they make up the third seed this time at No. 1. Fred Kassab was part of the No. 4 doubles winner last year and is part of the fourth seed at No. 2, while his former championship partner Nolan Werner is part of the second seed at No. 3 doubles.

Mattawan’s Nathaniel Webster: Last season’s runner-up at No. 1 singles has moved up one spot to the top seed as a junior for his third run at the title as a seeded player at this flight.

Portage Northern Alex Wootton: Also a junior, Wootton moved up to the second seed at this flight after winning a match a year ago while unseeded. He made the quarterfinals while unseeded as a freshman in 2017.

Midland Dow’s Anish Middha: He’ll try to cap his career as a No. 1 singles champion, entering with the third seed after finishing runner-up at No. 2 last season and as a freshman in 2016.

Bloomfield Hills Cranbrook Kingswood: All eight flights are seeded, led by two second seeds – Hayes Bradley and David Hermelin at No. 2 doubles and Calvi Teste and Ben Conti at No. 4. Bradley and Hermelin were champs last year at No. 3 doubles and runners-up in 2017 at No. 4. The Cranes won all four singles flights last season and only one of those players returns – Nolan Sherwood is the fourth seed at No. 2 after winning No. 3 in 2018 – but fourth-seeded No. 4 Patrick Tiwari and third-seeded No. 3 Geoffrey Qin were part of champions at Nos. 2 and 4 doubles, respectively, a year ago.

Detroit Country Day: As noted, Country Day was right behind Greenhills in seven flights at the Regional, and a pair of second seeds highlight the fully-seeded lineup. Nikolas Gruskin is the second seed at No. 1 singles and a two-time Finals runner-up, at No. 1 last season and No. 2 in 2016. No. 3 doubles Clay Hartje and Aidan Khaghany also are a second seed. Fourth-seeded No. 3 singles Christian Grozev was the runner-up at that flight last year, and Zain Rodger is part of the fourth-seeded No. 1 doubles after finishing No. 4 singles runner-up in 2018.

St. Clair’s Eli Pinnoo: Last season’s No. 2 singles runner-up as a junior is the second seed at that flight this weekend as he takes one more swing at a high school title.

East Grand Rapids’ Ryan Post and Jack Schultze: Post and Kole Butterer won No. 1 doubles last season as a third seed, and Post and Schultze enter in the same spot this time. Schultze was part of the No. 2 doubles runner-up last season.

With Greenhills playing in Division 3, this tournament will have a different look and perhaps some interesting opportunities. Liggett was the Division 4 champion in 2016 and 2017 and runner-up in 2014 and 2015. Allegan has a long history of success but is working for its first top-two Finals finish, as is Gabriel Richard. In fact, the rest of the top 10 after Liggett – including two teams tied for the 10th spot – have won a combined three MHSAA Finals.

Allegan: The Tigers finished third a year ago, just three points out of second, after three doubles flights finished runners-up. The strength is in doubles again, as all four flights are seeded led by David Roark and Chase Williams in the top spot at No. 4. Noah Festerling and Ben Groth are the second seed at No. 3 after Groth was part of the No. 4 runner-up last season, and Owen Clearwater and Walker Michaels are the fifth seed at No. 2 after coming in second at No. 3 in 2018. Two singles flights are seeded as well; Eli Festerling is the top seed at No. 4.

Grosse Pointe Woods University Liggett: The Knights are expected to climb substantially after tying for eighth a year ago. Liggett is seeded at six flights, with two-time reigning No. 1 singles champion William Cooksey leading off as the top seed at that flight. Gerry Sherer adds a second seed at No. 4 singles, and all four doubles are seeded with three in the third slot.

Ann Arbor Father Gabriel Richard: The Irish tied for fifth last season and could ride a strong singles lineup into contention. Senior Ian Sood is seeded second at No. 1 singles after making the semifinals last season and finishing No. 2 runner-up as both a freshman and sophomore. Tommy Heegan adds a second seed at No. 2, and Rafid Farjo is the third seed at No. 3.

Grand Rapids West Catholic’s Andrew Solarewicz: The sophomore singles standout will play in the No. 1 bracket for the second time, this weekend as the third seed after winning a match last season.

Traverse City St. Francis’ Brendan Chouinard and Ben Schmude: The top seed at No. 1 doubles is made up of Chouinard, part of last year’s No. 2 champion, and Schmude coming off the quarterfinals at No. 3 a year ago.

Traverse City St. Francis’ Charlie Schmude and Cody Richards: They are seeded first at Nos. 2 and 3 singles, respectively, after finishing runners-up at Nos. 3 and 4 a year ago.

PHOTO: Kaan Oral will attempt to lead Ann Arbor Greenhills to a Division 3 championship this weekend as he also plays for a third individual flight Finals title. (Click to see more from High School Sports Scene.)