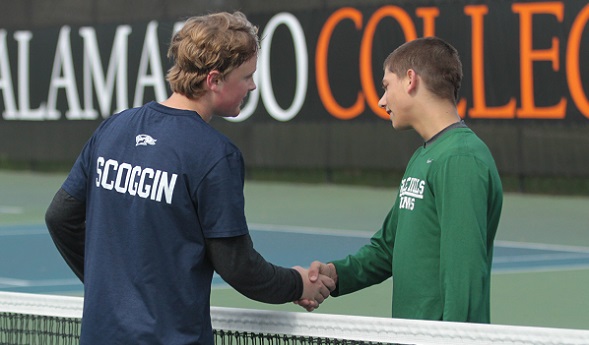 The second-longest MHSAA Finals championship streak is on the line this weekend as rivals could face off to determine the champions in all four divisions played across the Lower Peninsula.

Play both Friday and Saturday begins at 8 a.m. Click for full brackets for all four tournaments, plus Regional results, and come back to Second Half early Saturday evening for coverage from all four Finals.

Bloomfield Hills tied with Novi for last season’s Division 1 title; the championship was Bloomfield Hills’ first MHSAA boys tennis championship since the merging of the former Lahser and Andover high schools earlier this decade, and the Black Hawks are favored to repeat this weekend. Novi has seven seeded flights, but the team expected to challenge most is Huron, which won three straight MHSAA titles from 2011-13 and finished fourth a year ago.

Ann Arbor Huron: Doubles are Huron's strength, with all four pairs seeded second or first (two singles flights also are seeded). Chris Cho, the No. 4 singles champ last fall, teams with Brenden Chen for the top-seeded pair at No. 1 doubles, while Austin Choi and Eddie Wang are second at No. 2; Choi and Robert Dong won No. 2 last year. Alex Kotlyar and Justin Park are top-seeded at No. 3, and Henry Zhou and Matt Kelley are top-seeded at No. 4.

Ann Arbor Pioneer: The Pioneers came in third last season, only four points back, and are seeded at six flights as well. Nikhil Kalra and Grant McLean are seeded sixth at No. 2 doubles after winning No. 4 last season, and Gabe Kleer and Josh Lee are seeded third at No. 4 coming off the championship at No. 3. Jake Arvidson and Sayhaan Goraya are second-seeded at No. 1, as is Oliver Fuchs at No. 4 singles. Robert Dong is third-seeded at No. 3 singles.

Troy’s Steve Forman: A junior, Forman advanced to the semifinals last season at No. 1 singles as a four seed before losing to eventual champion Connor Johnston of Northville. This time, Forman enters with the top seed.

Novi’s Alex Wen: Novi’s lone flight champion last season, at No. 2 singles, Wen moved up to No. 1 this fall and is seeded sixth. Wen also won No. 3 singles in 2014.

Birmingham Brother Rice’s Jarreau Campbell: After teaming with Sean Abelarde to win No. 1 doubles last season, Campbell moved to singles and is the fifth seed at No. 2.

Forest Hills Central has won the last two Division 2 championships, last season in a tie with Portage Central. But the Rangers will have to fend off Dow, the favorite again after winning five straight titles from 2009-13. The Chargers finished third the last two seasons and only three points back a year ago.

Grand Rapids Forest Hills Central: The Rangers won their share of the overall title last year with four flight champions, including three at doubles, and five flights are seeded third or higher this time including three in doubles. Peyton Herbert and Mike Battiste are top-seeded at No. 3 doubles after winning No. 4 last year, while Jacob Wiltjer won No. 4 singles in both 2014 and 2015 and is seeded third at No. 2. Three other players are reigning flight champions: Justin James and Aidan Rynbrandt won No. 2 doubles last season and Jack Ziegler was part of the winning pair at No. 3; Rynbrandt and Ziegler are seeded second at No. 2 this time, and James and Reed Aleck are the third seed at No. 1.

Grand Rapids Forest Hills Northern: Six flights are seeded, including four doubles flights, and four flights are seeded third or second. The leading seed is at No. 4 doubles, where Justin Gendler and Jessie Oman are second to Dow’s pair.

Portage Central’s Lucas Guy: The No. 3 singles champion as a second seed last season, Guy moved up to No. 1 singles and is seeded third this weekend.

Birmingham Groves’ Gabe Vidinas: Unseeded at No. 1 singles last season, Vidinas made the second round. He’s the top-seeded player at No. 2 this weekend.

Portage Central’s Cameron Raedy: Part of last season’s champion at No. 1 doubles, Raedy is seeded fourth at No. 2 singles.

Bloomfield Hills Cranbrook Kingswood: All eight flights are seeded third or higher and four flights are top-seeded, beginning with No. 1 singles Benji Jacobson – last year’s champion at No. 2 and the runner-up at No. 1 in 2014. Only two players are back from the eight who swept the doubles championships for the Cranes last season, and they’re with new partners: Jacob Yellen is seeded second at No. 2 with Joe Croskey and Andrew Du is seeded first with Michael Bian at No. 1 after Yellen and Du paired to win No. 4 doubles a year ago and Bian finished runner-up at No. 3 singles. Cranbrook Kingswood’s other top seeds are Blake Fisher and Nikhil Deenadayalu at No. 3 doubles and Eshaan Kawlra and Jack Trees at No. 4. Reigning No. 4 singles champion Justin Luo is seeded second at No. 3.

Detroit Country Day: The Yellowjackets also are seeded third or better at all eight flights, but with only three top seeds: Nik Gruskin at No. 2 singles, Eric Wang at No. 4 and Milind Rao and Kavon Rahmani at No. 2 doubles. Michael Khaghany is the reigning champion at No. 3 singles and moved up to No. 1, where he’s seeded third. Rahmani was part of the runner-up at No. 3 doubles last season, and No. 2 doubles runner-up pair Ryan Murakawa and Rick Warnicke are the second seed at No. 1. Alex Mettler, the runner-up to Luo at No. 4 singles in 2015, is third-seeded at No. 3 this time.

East Grand Rapids: The Pioneers will look to break into the top two for the first time since finishing runner-up in 2013 with eight seeded flights including third seeds at all four doubles. Tommy Alkema and Finn Adams made the No. 1 doubles semifinals last season and are back as the third seed in that flight.

Holland Christian’s Ryan Rhoades: The second-seeded player at No. 1 singles, Rhoades made the semifinals as the third seed at No. 2 last year.

St. Joseph’s Ryan Okonski – The Bears’ top singles player is seeded fourth at No. 1 after making the quarterfinals while unseeded last season.

If rankings play out, Division 4 would have the story of the weekend. University Liggett has finished runner-up the last two seasons and is favored to end Greenhills’ eight-season hold on the championship. Liggett last won an MHSAA boys tennis title in 2002 but owns a record 34. Traverse City St. Francis also finished third last season and is seeking its first top-two finish.

Grosse Pointe Woods University Liggett: The Knights can be optimistic with all eight flights seeded first or second this weekend and five players who were either champions or runners-up last fall. At No. 2 singles, Christian Illitch is the top seed after finishing runner-up a year ago, while Casey Scoggin is the second seed at No. 3 and Andrew Staricco is the top seed at No. 4 after Staricco was runner-up at No. 4 last season and Scoggin teamed with Alec Azar to win No. 3 doubles. Azar and new partner Davey Sekhon are the second seed at No. 3 doubles this time, and Craig Buhler is seeded second with Spencer Warezak at No. 3 doubles after finishing second with a different partner at No. 4 in 2015. Matthew Lesha and Victor Logan at No. 4 doubles also are top-seeded. T.J. Dulac is the second seed at No. 1 singles after reaching the quarterfinals last season, and Thomas Van Pelt and Maddie Fozo are the second seed at No. 1 doubles; Van Pelt made the semifinals with a different partner last year, and Fozo was a No. 1 singles semifinalist in the LP Division 4 Girls Final in 2015 and a quarterfinalist this past spring.

Ann Arbor Greenhills: The Gryphons aren’t used to playing from this spot but won all eight flights at their Regional and are seeded third or higher at all but one flight, where they are seeded fifth. Sam Talsma is the top seed at No. 3 singles after winning at No. 2 last year, and Jack Harris and Mitchell Gajar are seeded fifth at No. 1 doubles after winning championships with different partners a year ago, Harris at No. 1 and Gajar at No. 2. Matt Chatas and Andy Xie are seeded third at No. 2 doubles and are another decorated pair; Xie won No. 4 singles last season and Chatas was part of the No. 3 doubles runner-up with Trey Feldeisen, who is seeded first at No. 3 doubles with new partner Sushruta Shankar. Kaan Oral and Henry Branch are second seeds at Nos. 2 and 4 singles, respectively.

Traverse City St. Francis: The Gladiators had a flight runner-up last season in Tyler Spigarelli at No. 3 singles, and he’s back seeded fourth this weekend. Total, seven flights are seeded, including two top-seeded doubles pairs: Elliott Bandrowski and Jackson Richmond at No. 1 and Ryan Navin and Joe Primeau at No. 2. Bandrowski made the second round at No. 1 singles last year, and Navin and Primeau advanced to the semifinals at No. 2 doubles as the third seed.

Williamston’s Oliver Weaver – The top-seeded player at No. 1 singles, Weaver is trying to keep with a tradition that has seen players from his Capital Area Activities Conference White win four of the last six titles at the top flight in this division. Weaver finished runner-up last season to Otsego’s Luke Ford, losing in three sets after winning the first.

PHOTO: University Liggett’s Casey Scoggin (left) and Greenhills’ Matt Chatas shake hands after last season’s championship match at No. 3 doubles. Both will return to the Division 4 Finals this weekend. (Click to see more from HighSchoolSportsScene.com.)